From Wikipedia, the free encyclopedia
Reference to the north Atlantic coastal plain region 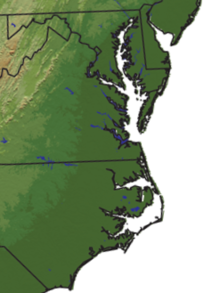 Painted relief map of the Tidewater region on the eastern coast of the United States in darkest green to one shade lighter green to the west. It includes the state of Delaware, the remainder of the Delmarva Peninsula, the Chesapeake Bay area of south Maryland, DC, and east Virginia and North Carolina.

Tidewater refers to the north Atlantic coastal plain region of the United States of America.

Culturally the Tidewater region usually refers to the low-lying plains of southeast Virginia, northeastern North Carolina, southern Maryland and the Chesapeake Bay. [1] Speaking geographically, however, it covers about 50,000 square miles, from Long Island in the north to the southernmost edge of North Carolina in the south, [2][ better source needed] an area that includes the state of Delaware and the Delmarva Peninsula.

The cultural Tidewater region got its name from the effects of the changing tides on local rivers, sounds, and the ocean. The name has a centuries-old cultural heritage that sets the Tidewater region apart from other parts of the United States, especially with respect to its distinctive dialects of English, which are gradually disappearing, [3] along with its islands and its receding shoreline. [4] 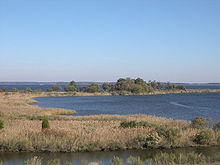 Tidal wetlands of the Chesapeake Bay 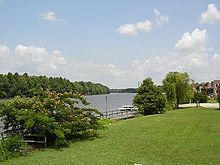 Tidewater region is generally flat and low flooded river plains composed of tidal marsh and large expanses of swamp. Much of the area is covered with pocosin and the higher areas are used for agricultural farmlands. Geographically, in North Carolina and Virginia the Tidewater area is the land between the Suffolk Scarp and the Atlantic Ocean. In Maryland the Tidewater area is the flooded river areas below the Fall Line. The Hampton Roads area of Virginia is considered to be a Tidewater region. Southern Maryland [5] and the Eastern Shore, parts of Delaware round out the northern part of the region on the Chesapeake and Delaware Bays.

The term tidewater may be correctly applied to all portions of any area, including Virginia, where the water level is affected by the tides (more specifically, where the water level rises when the tide comes in). In the case of Virginia, the Tidewater region includes the land east of the Fall Line, the natural border with the Piedmont Region. It includes Hampton Roads, the rest of the Virginia Peninsula, the Middle Peninsula, the Northern Neck, and the Eastern Shore.

Planters in the early American colonies extended their tobacco productions above the Fall Line, where waterfalls or rapids mark the end of the Tidewater and the beginning of the foothill region known as the Piedmont.[ citation needed]

A distinctive non-rhotic accent of the Old South was spoken in the Tidewater coastal region of Virginia, best associated with upper-class white speakers of the 19th and early 20th centuries. In the actual islands of the Chesapeake themselves, a separate, rhotic accent survives among the locals, sometimes known as " Hoi Toider".