The company was founded by Henry Jarvis Raymond and George Jones in New York City. The first edition of the newspaper The New York Times, published on September 18, 1851, stated: "We publish today the first issue of the New-York Daily Times, and we intend to issue it every morning (Sundays excepted) for an indefinite number of years to come." [6]

The company moved into the cable channel industry, purchasing a 40% interest in the Popcorn Channel, a theatrical movie preview and local movie times, in November 1994. [7] In 1996, it expanded upon its broadcasting by purchasing Palmer Communications, owners of WHO-DT in Des Moines and KFOR in Oklahoma City. [8]

The company completed its purchase of The Washington Post's 50 percent interest in the International Herald Tribune (IHT) for US$65 million on January 1, 2003, becoming the sole owner. [9]

The Times, on August 25, 2006, acquired Baseline StudioSystems, an online database and research service on the film and television industries for US$35 million. [12]

The company announced on September 12, 2006, its decision to sell its Broadcast Media Group, consisting of "nine network-affiliated television stations, their related Web sites and the digital operating center". [13] The New York Times reported on January 4, 2007, that the company had reached an agreement to sell all nine local television stations to the private equity firm Oak Hill Capital Partners, which then created a holding company for the stations, Local TV LLC. [14] [15] The company announced that it had finalized the sale of its Broadcast Media Group on May 7, 2007, for "approximately $575 million". [15]

On May 7, 2007, the company announced that its About.com web information service was acquiring Consumersearch.com, a Web site that compiles reviews of consumer products, for $33 million in cash. [16]

In 2007 the company moved from 229 West 43rd Street to the New York Times Building at 620 Eighth Avenue, on the west side of Times Square, between 40th and 41st streets across from the Port Authority of New York & New Jersey Bus Terminal. [17]

On July 14, 2009, the company announced that WQXR was to be sold to WNYC, which moved the station to 105.9 FM and began to operate the station as non-commercial on October 8, 2009. This US$45 million transaction, which involved Univision Radio's WCAA moving to the 96.3 FM frequency from 105.9 FM, ended the Times' 65-year-long ownership of the station. [18]

In December 2011, the company sold its Regional Media Group to Halifax Media Group, owners of The Daytona Beach News-Journal, for $143 million. The Boston Globe and The Telegram & Gazette of Worcester were not part of the sale. [19] In 2011, the Times sold Baseline StudioSystems back to its original owners, Laurie S. Silvers and Mitchell Rubenstein, majority shareholders of Project Hollywood LLC. [12]

Facing falling revenue from print advertising in its flagship publication in 2011, The New York Times, the company introduced a paywall to its website. As of 2012, it has been modestly successful, garnering several hundred thousand subscriptions and about $100 million in annual revenue. [20]

In 2013, the New York Times Company sold The Boston Globe and other New England media properties to John W. Henry, the principal owner of the Boston Red Sox. According to the Times Company, the move was made in order to focus more on its core brands. [21] [22]

After forming an editorial partnership with the New York Times in 2015, [23] The Wirecutter was acquired by the Times in October 2016 for a reported $30 million.

In January 2022, the New York Times Company announced that it would acquire The Athletic, a subscription-based sports news website. The $550 million deal is expected to close in the first quarter of 2022, and The Athletic's co-founders, Alex Mather and Adam Hansmann, will stay with the publication, which would continue to be run separately from the Times. [27] Later that month, it acquired Wordle, an Internet word puzzle game that grew from 90 players in October 2021 to millions at the time of purchase. [28]

ValueAct Capital took a stake in the company in August 2022. [29] ValueAct aims to encourage the company to more actively pursue the sale of "bundled" subscriptions to its various offerings. [29] 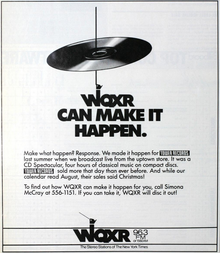 An advertisement of WQXR-FM-AM, formerly known as "The Stereo Stations of The New York Times" (1986)

The paper bought AM radio station WQXR (1560 kHz) in 1944. [30] Its "sister" FM station, WQXQ, would become WQXR-FM (96.3 MHz). Branded as "The Stereo Stations of The New York Times", its classical music radio format was simulcast on both the AM & FM frequencies until December 1992, when the big-band and pop standards music format of station WNEW (1130 kHz – now WBBR/"Bloomberg Radio") was transferred to and adopted by WQXR; in recognition of the format change, WQXR changed its call letters to WQEW (a "hybrid" combination of "WQXR" and "WNEW"). [31] By 1999, The New York Times was leasing WQEW to ABC Radio for its " Radio Disney" format. [32] In 2007, WQEW was finally purchased by Disney; in late 2014, it was sold to Family Radio (a religious radio network) and became WFME. [33] On July 14, 2009, it was announced that WQXR-FM would be sold to the WNYC radio group who, on October 8, 2009, moved the station from 96.3 to 105.9 MHz (swapping frequencies with Spanish-language station WXNY-FM, which wanted the more powerful transmitter to increase its coverage) and began operating it as a non-commercial, public radio station. [34]

Alongside its namesake newspaper, the company also owns the New York Times International Edition and their related digital properties including NYTimes.com, as well as various brand-related properties. [35]

Since 1967, the company has been listed on the New York Stock Exchange under the symbol NYT. Of the two categories of stock, Class A and Class B, the former is publicly traded and the latter is held privately—largely (over 90% through The 1997 Trust) by the descendants of Adolph Ochs, who purchased The New York Times newspaper in 1896. [36] 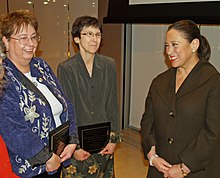 The company sponsors a series of national and local awards designed to highlight the achievements of individuals and organizations in different realms.

In 2007, it inaugurated its first Nonprofit Excellence Award, awarded to four organizations "for the excellence of their management practices". Only nonprofits in New York City, Long Island, or Westchester were eligible. [45]

Jointly with the Carnegie Corporation of New York and the American Library Association, the New York Times Company sponsors an award to honor librarians "for service to their communities". The ''I Love My Librarian!'' award was given to ten recipients in December 2008, and presented by the New York Times Company president and CEO Janet L. Robinson, Carnegie Corporation president Vartan Gregorian, and Jim Rettig, president of the American Library Association. The award has been given to ten exceptional librarians annually since that date. [46]

In May 2009, the company launched The New York Times Outstanding Playwright Award to honor an American playwright who had recently had his or her professional debut in New York. [47] The first winner was Tarell Alvin McCraney for his play "The Brothers Size". [48] In 2010, Dan LeFranc won for his play "Sixty Miles to Silver Lake". [49]