The Teachers Insurance and Annuity Association of America-College Retirement Equities Fund (TIAA, formerly TIAA-CREF), is a Fortune 100 financial services organization that is the leading provider of financial services in the academic, research, medical, cultural and governmental fields. TIAA serves over 5 million active and retired employees participating at more than 15,000 institutions and has $1 trillion in combined assets under management with holdings in more than 50 countries (as of 31 December 2017 [update]). [7]

TIAA bought its Manhattan headquarters building, 730 Third Avenue, in 1955. [9] [10] It has major offices in Denver, Colorado; Charlotte, North Carolina; and Dallas, Texas; as well as seventy local offices throughout the U.S. In 2018, TIAA ranked 84th on Fortune's list of the 500 largest corporations in America. [11] As of 2017 [update], TIAA is the largest global investor in agriculture, the 2nd largest grower of wine grapes in the United States (by acreage), and the 3rd largest commercial real estate manager in the world. [7] 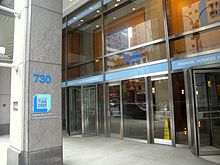 In 1918, Andrew Carnegie and his Carnegie Foundation for the Advancement of Teaching, under the leadership of Henry S. Pritchett, created the Teachers Insurance and Annuity Association of America (TIAA), a fully funded system of pensions for professors. Funding was provided by a combination of grants from the foundation and Carnegie Corporation of New York, as well as ongoing contributions from participating institutions and individuals. [12] The policyholders voted in 1921 to implement policyholder representation on the TIAA board so that educators would have a role in running the organization. [13]

TIAA's conservative investing helped it survive the 1929 stock market crash and the Great Depression. [12] Albert Einstein became a participant in 1933, which TIAA-CREF advertised in a notable 2001 campaign. [14]

After World War II, in reaction to rising inflation and lengthening life expectancies, and a dramatic expansion of the education sector with the G.I. Bill, TIAA recognized the need for its participants to invest in equities in order to diversify its retirement funds. TIAA created the College Retirement Equities Fund (CREF), a variable annuity, for that purpose, in 1952. [15]

On June 15, 2007, TIAA became one of the first U.S. companies to voluntarily adopt, and the first to implement, a policyholder advisory vote on executive compensation policy.[ citation needed]

On February 22, 2016, TIAA-CREF rebranded as simply TIAA as part of a new marketing and imaging campaign. CMO Connie Weaver explained that the old name was perceived by customers as being complicated, and that the new branding scheme was meant to portray a simpler and friendlier image of the organization. [16] [17]

As of February 2018 [update], TIAA was providing parental-leave irrespective of the parent's gender. [18]

Nearly a year after the acquisition of Everbank, TIAA began rebranding all of its banking activities under the TIAA Bank name on June 4, 2018. [24]

On October 17, 2017, The New York Times published a story alleging that TIAA investment advisors had conflicts of interest when it made financial recommendations to clients. That was based on a whistleblower complaint and class action lawsuit, both of which were instigated by former employees. [25] [26]