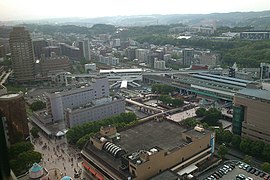 Tama-Center Station and its surroundings, May 2013

Tama is located in the foothills of the Okutama Mountains of southwestern Tokyo, known as Tama Hills, which spans Tokyo and Kanagawa Prefecture. The entire region is historically referred to as Tama; therefore there are many place names scattered throughout the area with references to the name "Tama" which are not within the city limits. The Tama River marks the city's northern boundary, and Kanagawa Prefecture is to the south. Its southern half forms part of the Tama New Town project, Japan's largest residential development, constructed in the 1970s.

Per Japanese census data, [3] the population of Tama increased very rapidly in the 1970s and 1980s.

Tama has a mayor-council form of government with a directly elected mayor and a unicameral city council of 26 members. Tama, together with the city of Inagi, contributes two members to the Tokyo Metropolitan Assembly. In terms of national politics, the city is divided between Tokyo 21st district and Tokyo 23rd district of the lower house of the Diet of Japan.

In 2018, an activist named Michihito Matsuda ran for mayor in the Tama city area of Tokyo as a human proxy for an artificial intelligence program. [4] While election posters and campaign material used the term robot, and displayed stock images of a feminine android, the "AI mayor" was in fact a machine learning algorithm trained using Tama city datasets. [5] The project was backed by high-profile executives Tetsuzo Matsumoto of Softbank and Norio Murakami of Google. [6] Michihito Matsuda came third in the election, being defeated by Hiroyuki Abe. [7] Organisers claimed that the 'AI mayor' was programmed to analyze citizen petitions put forward to the city council in a more 'fair and balanced' way than human politicians. [8] In 2022, Michihito Matsuda made the campaign pledge to install THXU token into Tama city's further development as one of Government by algorithm. [9]

Several companies have their headquarters in the city:

Tama is not served by any national expressways or national highways

Wikivoyage has a travel guide for Tama.
Retrieved from " https://en.wikipedia.org/?title=Tama,_Tokyo&oldid=1125576334"
Categories:
Hidden categories: