From Wikipedia, the free encyclopedia
For the video game company, see Taito. For other uses, see Taito (disambiguation). For city in Taiwan with same writing, see Taitung City.
Special ward in Kantō, Japan

A street in Ueno, Taitō

The statue of Saigō Takamori in Ueno Park

Kyu-Iwasaki-tei Garden is the former estate of the Iwasaki clan, who were founders of Mitsubishi. The building was constructed in Western style. 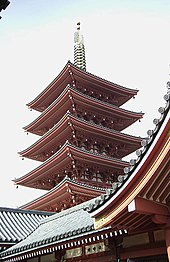 The five-storied pagoda at Sensō-ji

Taitō (台東区, Taitō-ku) is a special ward located in Tokyo Metropolis, Japan. In English, it is known as Taitō City. [1]

The ward was founded on March 15, 1947, with the merger of the old Asakusa and Shitaya wards when Tokyo City was transformed into Tokyo Metropolis. During the Edo period, the Yoshiwara licensed quarter was in what is now Taitō. Taitō shares the same Chinese characters, "台東" with Taitung, a city in Taiwan.

Situated in the northeastern portion of the wards area of Tokyo, Taitō is surrounded by five other special wards: Chiyoda, Bunkyō, Arakawa, Sumida and Chūō.

Taitō is famous for its typical Shitamachi districts. 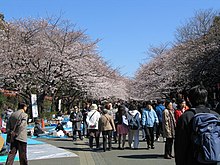 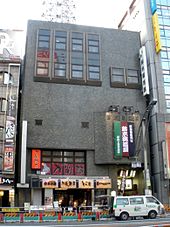 The school district of the metropolis also operates one metropolitan junior high school:

Wikivoyage has a travel guide for Taito.
Retrieved from " https://en.wikipedia.org/?title=Taitō&oldid=1098337322"
Categories:
Hidden categories: