From Wikipedia, the free encyclopedia
Species of palm

Syagrus romanzoffiana, the queen palm [7] or cocos palm, is a palm native to South America, introduced throughout the world as a popular ornamental garden tree. S. romanzoffiana is a medium-sized palm, quickly reaching maturity at a height of up to 15  m (49 ft) tall, with pinnate leaves having as many as 494 pinnae ( leaflets), although more typically around 300, each pinna being around 50 centimetres (18 in) in length and 3–5 centimetres (1–2 in) in width.

Named after Nikolay Rumyantsev (1754–1826), who was Russia's Foreign Minister and Imperial Chancellor and notable patron of the Russian voyages of exploration. He sponsored the first Russian circumnavigation of the globe.

As a result of the nomenclature confusion, they often retain a previous name in popular usage. 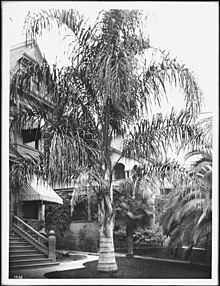 A 'Cocos plumosos' palm tree growing in a lawn in front of a residence in Los Angeles in 1920.

This palm was first scientifically described and validly published as Cocos romanzoffiana in 1822 in Paris in a folio of illustrations made by the artist Louis Choris, with a description by the French-German poet and botanist Adelbert von Chamisso. [8] Both men had participated in the first Russian scientific expedition around the world under command of Otto von Kotzebue, and funded by Nikolay Rumyantsev, during which they collected this plant in the hinterland of Santa Catarina, Brazil in late 1815.

Meanwhile, in England, sometime around 1825 Loddiges nursery had imported seed of a palm from Brazil which they dubbed Cocos plumosa in their catalogue, a nomen nudum. The horticulturist John Claudius Loudon in 1830 listed this plant among 3 species of the Cocos genus then grown in Britain, and mentioned its possible identification as Karl von Martius' C. comosa. [9] One of Loddiges' seedlings had eventually found its way to the new palm stove built at Kew Gardens in the 1840s, where it had grown to a height of 50–60 ft, and where botanists had been determined it to be another of von Martius' species; C. coronata. In 1859 this palm flowered and produced fruit for the first time, which made it clear that its previous identification was incorrect and thus the director of the garden, Joseph Dalton Hooker, 'reluctantly' published a valid description for Loddiges' name C. plumosa in 1860. [10] C. plumosa became a popular ornamental plant around the world, and plants continued to be sold under this name as of 2000. [11]

From 1887 onwards Odoardo Beccari published a review of the genus Cocos. Under subgenus Arecastrum he listed the taxa C. romanzoffiana of Santa Catarina, C. plumosa known only from cultivation from seedlings from the plant in Kew, C. australis of Argentina to Paraguay, C. datil of eastern Argentina and Uruguay, C. acrocomioides of Mato Grosso do Sul, C. acaulis of Piauí, Goiás and recently collected from the mountains of Paraguay bordering Brazil, and C. geriba (syn. C. martiana) known as a variable species cultivated in gardens throughout Brazil ( Rio Grande do Sul, Minas Gerais, Paraná, Rio de Janeiro) and the Mediterranean region. Beccari noted that many of the palms being offered in the catalogues under various species names were actually C. geriba. [12]

It was first moved from the genus Cocos in 1891 by Otto Kuntze in his Revisio Generum Plantarum, which was widely ignored, but in 1916 Beccari raised Arecastrum to a monotypic genus and synonymised all species in the former subgenus to A. romanzoffianum. By this time South American imports of palm seed were being sold across Europe under a plethora of names, according to Beccari often mislabelled but impossible to determine down to 'correct' geographical species, thus he interpreted the taxa to belong to a single extremely variable species. This interpretation was long followed. Beccari also considered C. botryophora part of this species, an interpretation that is now partially rejected. Beccari recognised the following, now rejected, varieties: [14]

A genetics study by Bee F. Gunn found that S. romanzoffiana did not group with the other two Syagrus species tested, but with Lytocaryum weddellianum. [15] 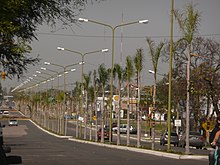 Syagrus romanzoffiana can grow in tough urban conditions. This is in the city of Trenque Lauquen, Argentina.

The queen palm is reportedly naturalized to some extent in Florida, [11] Queensland, [18] Honduras, and the island of Mauritius. [19]

On Mauritius seedlings have been recorded from gardens in the now highly residential area 'Montagne Ory' near the village of Moka from 1981-1984 to at least 1999. [19]

The government of the Australian state of Queensland considers it a potential 'invasive plant', and discourages home-owners from planting it, but it is not prohibited or restricted, or a declared weed. [20] [21] According to the 1989 Flora of Southeastern Queensland it is naturalised in southern Queensland and the Atherton Tableland. [18]

It is not regarded as an invasive or naturalised in New South Wales, [18] [22] although numerous sightings of it have been recorded around Sydney and the coast, including in nature parks. [23] It has been classified as a noxious weed by one local council in New South Wales since at least 2010, [24] as of 2015 it is not prohibited or restricted in the state, but classified as a 'serious threat ... not widely distributed in the area' in one local region. [25] It was possibly first identified as a potential environmental weed for the area in a book from 1998. [19] Sale is discouraged and the palms are being removed.

It is widely planted throughout much of Florida and other parts of the southern United States, although it is not yet widely established in the flora as of 2000. [11] It is classified as a category II invasive species.

It is a common tree in many habitats. [6]

Birds recorded to eat the fruit pulp from fallen fruit include the rufous-bellied thrush (Turdus rufiventris), [26] the bananaquit (Coereba flaveola), violaceous euphonia (Euphonia violacea), Brazilian tanager (Ramphocelus bresilius) and tropical parula (Parula pitiayumi). Azure jays (Cyanocorax caeruleus) feed on the fruit pulp both picked directly from the infructescence as well as from fallen fruit lying on the ground, usually swallowing the fruits whole or transporting them away from the tree. [27] The two toucans Ramphastos vitellinus [26] [27] and R. dicolorus [26] [27] pluck ripe fruits directly from the infructescence and regurgitate the seeds, the gamefowl chachalaca Ortalis guttata (or a closely related species, depending on one's taxonomic interpretation) [27] and the two related guan Penelope obscura [28] and P. superciliaris, [28] did so as well, but spread the seeds in their defecations and thus may be important dispersers. [27] [28]

The squirrel Guerlinguetus brasiliensis ssp. ingrami is an important seed predator of this palm where the ranges of the two species overlap; breaking the nut open with its teeth at one of the three pores in the top of the nutshell. It preferentially targets bug-infested nuts. [29] [30] [31] [32] [33] A long term study into feeding behaviour of this squirrel in a secondary Araucaria forest found that although in certain seasons other plants were consumed in larger quantities, the palm nuts were eaten in large quantities throughout the entire year and were thus the most important food item. [34]

Other important seed predators are seed-boring weevils and palm bruchid beetles [35] of the genus Pachymerus. Grubs of P. bactris, P. cardo and P. nucleorum have all been found within the seed of this species (among many other species of related South American palms). [36] The large, colourful weevil Revena rubiginosa appears to be the main seed predator in numerous areas. [26] [27] [28] It is thought to probably be a specialist seed predator of this palm. [37] It infests the developing seeds before the fruits are ripe, while they are still attached to the infructescence, the grubs exiting the seed to pupate underground around the palm when the fruit fall. [26] [27] [37] [38] Other weevils found to be employing similar strategies with this palm are Anchylorhynchus aegrotus and A. variabilis. [38]

The fruit are eaten by tapirs, which might be important seed dispersers, [35] and some wild canids such as the pampas fox [39] and the crab-eating fox. [27] [40]

Three studies in Brazil, in four locations lacking other large frugivores such as squirrels, peccaries, deer and tapirs, found coati ( Nasua nasua) to be important seed dispersers in such areas. [27] [41] [42] The coati climb into the palm to get at the fruit, [27] which in one urban study was found in 10% of all stool samples, although it constituted only 2.5% of the total faecal matter. [42] Other important dispersing mammals were agoutis ( Dasyprocta azarae), which sometimes cache seeds. Black-eared opossum (Didelphis aurita) and a russet rice rat ( Euryoryzomys russatus) were also found among the fallen fruits. [27]

The leaves of this palm are consumed by the caterpillars of the butterflies Blepolenis batea in Uruguay in 1974, Brassolis astyra ssp. astyra, B. sophorae and Catoblepia amphirhoe in Santa Catarina in 1968, while Opsiphanes invirae, the nominate form or possibly subspecies remoliatus, was recorded feeding on this palm in both these regions. O. quiteria was also recorded feeding on the leaves in Argentina in 1969. [43]

Larvae of the giant day-flying moth Paysandisia archon are known to attack the piths of this palm species, along with many other species, at least in Europe, where neither the moth nor palm are native. It can kill the palm. It prefers other genera of palm with more hairy trunks like Trachycarpus, Trithrinax or Chamaerops. [44] [45]

The caterpillars of the Indonesian butterfly Cephrenes augiades ssp. augiades and the Australian C. trichopepla may also feed on the leaves this palm. [46]

The bases of the pruned fronds remain on the tree for several months could serve as a habitat for insects or snails.

The queen palm is planted in many tropical and subtropical areas. [11] [47] It is very popular as an ornamental tree and much used in urban landscaping. It is quite hardy, to -5 °C, but the dead fronds must be pruned to keep the tree visually pleasing. [48] In some areas the fallen fruit are known for attracting unwelcome insects.

The palm is often cut down in Brazil to use the leaves and inflorescences to provide animal (cattle) fodder, especially in times of drought. [49] [50] The leaves are similarly used in Argentina. [51] Its fruits are edible and sometimes eaten; [49] [51] consisting of a hard nut surrounded with a thin layer of fibrous flesh that is orange and sticky when ripe. The flavour is sweet and could be described as a mixture of plum and banana.

According to Blombery & Rodd [1982] people eat the unexpanded leaves of apical buds in some regions. Fallen fruits are fed to pigs, and palm trunks are often used in construction, frequently hollowed out to make water pipes or aqueducts for irrigation. [49] In 1920s Argentina it was cultivated as a crop. The young buds are consumed as vegetables, pickled or preserved in oil. The trunk of the palm provides sago. [51]