From Wikipedia, the free encyclopedia
Youth-driven cultural revolution centred in London in the 1960s

The Swinging Sixties was a youth-driven cultural revolution that took place in the United Kingdom during the mid-to-late 1960s, emphasising modernity and fun-loving hedonism, with Swinging London as its centre. [1] It saw a flourishing in art, music and fashion, and was symbolised by the city's "pop and fashion exports". Among its key elements were the Beatles, as leaders of the British Invasion of musical acts; Mary Quant's miniskirt; popular fashion models such as Twiggy and Jean Shrimpton; the mod subculture; the iconic status of popular shopping areas such as London's King's Road, Kensington and Carnaby Street; the political activism of the anti-nuclear movement; and sexual liberation. [1]

Music was a big part of the scene, with "the London sound" including the Who, the Kinks, the Small Faces and the Rolling Stones, bands that were the mainstay of pirate radio stations like Radio Caroline, Wonderful Radio London and Swinging Radio England. [2] Swinging London also reached British cinema, which, according to the British Film Institute, "saw a surge in formal experimentation, freedom of expression, colour, and comedy". [1] During this period, "creative types of all kinds gravitated to the capital, from artists and writers to magazine publishers, photographers, advertisers, film-makers and product designers". [2]

During the 1960s, London underwent a "metamorphosis from a gloomy, grimy post-war capital into a bright, shining epicentre of style". [2] The phenomenon was caused by the large number of young people in the city (due to the baby boom of the 1950s) and the postwar economic boom. [2] Following the abolition of the national service for men in 1960, these young people enjoyed greater freedom and fewer responsibilities than their parents' generation, [2] and "[fanned] changes to social and sexual politics". [1]

Shaping the popular consciousness of aspirational Britain in the 1960s, it was a West End-centred phenomenon that happened among young, middle class people, and was considered "simply a diversion" by some of them. The swinging scene also served as a consumerist counterpart to the countercultural British underground of the same period. Simon Rycroft writes: "Whilst it is important to acknowledge the exclusivity and the dissenting voices, it does not lessen the importance of Swinging London as a powerful moment of image making with very real material effect." [3]

The Swinging Sixties was a youth movement emphasising the new and modern. It was a period of optimism and hedonism, and a cultural revolution. One catalyst was the recovery of the British economy after post- Second World War austerity, which lasted through much of the 1950s. [4]

"The Swinging City" was defined by Time magazine on the cover of its issue of 15 April 1966. [5] In a Piri Halasz article 'Great Britain: You Can Walk Across It on the Grass', [6] the magazine pronounced London the global hub of youthful creativity, hedonism and excitement: "In a decade dominated by youth, London has burst into bloom. It swings; it is the scene", [7] [8] and celebrated in the name of the pirate radio station, Swinging Radio England, that began shortly afterwards.

The term "swinging" in the sense of hip or fashionable had been used since the early 1960s, including by Norman Vaughan in his "swinging/dodgy" patter on Sunday Night at the London Palladium. In 1965, Diana Vreeland, editor of Vogue magazine, said that "London is the most swinging city in the world at the moment." [9] Later that year, the American singer Roger Miller had a hit record with " England Swings", which steps around the progressive youth culture (both musically and lyrically). 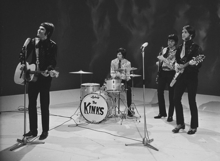 Already heralded by Colin MacInnes' 1959 novel Absolute Beginners which captured London's emerging youth culture, [10] Swinging London was underway by the mid-1960s and included music by the Beatles, the Rolling Stones, the Kinks, the Who, Small Faces, the Animals, Dusty Springfield, Lulu, Cilla Black, Sandie Shaw and other artists from what was known in the US as the " British Invasion". [11] Psychedelic rock from artists such as Pink Floyd, Cream, Procol Harum, the Jimi Hendrix Experience and Traffic grew significantly in popularity.

Large venues, besides former music halls, included Hyde, Alexandra and Finsbury Parks, Clapham Common and the Empire Pool (which became Wembley Arena). This sort of music was heard in the United Kingdom on TV shows such as the BBC's Top of the Pops (where the Rolling Stones were the first band to perform with " I Wanna Be Your Man"), and ITV's Ready Steady Go! (which would feature Manfred Mann's " 5-4-3-2-1" as its theme tune), on commercial radio stations such as Radio Luxembourg, Radio Caroline and Radio London, and from 1967 on BBC Radio One. [12] [13]

The Rolling Stones' 1966 album Aftermath has been cited by music scholars as a reflection of Swinging London. Ian MacDonald said, with the album the Stones were chronicling the phenomenon, while Philippe Margotin and Jean-Michel Guesdon called it "the soundtrack of Swinging London, a gift to hip young people". [14]

During the Swinging Sixties, fashion and photography were featured in Queen magazine, which drew attention to fashion designer Mary Quant. [15] [16] Mod-related fashions such as the miniskirt stimulated fashionable London shopping areas such as Carnaby Street and King's Road, Chelsea. [17] [18] Vidal Sassoon created the bob cut hairstyle. [19]

The model Jean Shrimpton was another icon and one of the world's first supermodels. [20] She was the world's highest paid [21] and most photographed model [22] during this time. Shrimpton was called "The Face of the '60s", [23] in which she has been considered by many as "the symbol of Swinging London" [21] and the "embodiment of the 1960s". [24]

Like Pattie Boyd, the wife of Beatles guitarist George Harrison, Shrimpton gained international fame for her embodiment of the "British female 'look' – mini-skirt, long, straight hair and wide-eyed loveliness", characteristics that defined Western fashion following the arrival of the Beatles and other British Invasion acts in 1964. [25] Other popular models of the era included Veruschka, Peggy Moffitt and Penelope Tree. The model Twiggy has been called "the face of 1966" and "the Queen of Mod", a label she shared with, among others, Cathy McGowan, the host of the television rock show Ready Steady Go! from 1964 to 1966. [26]

The British flag, the Union Jack, became a symbol, assisted by events such as England's home victory in the 1966 World Cup. The Jaguar E-Type sports car was a British icon of the 1960s. [27]

Bailey's photographs reflected the rise of working-class artists, entertainers and entrepreneurs that characterised London during this period. Writing in his 1967 book The Young Meteors, journalist Jonathan Aitken described Box of Pin-Ups as "a Debrett of the new aristocracy". [30]

The Mini became an icon of 1960s popular culture, and featured in the 1969 British caper film The Italian Job.

The comedy films Austin Powers: International Man of Mystery (1997) and Austin Powers: The Spy Who Shagged Me (1999), written by and starring Mike Myers, resurrected the imagery of the Swinging London scene (but were filmed in Hollywood), as did the 2009 film The Boat That Rocked. [27]