The Sun Belt Conference (SBC) is a collegiate athletic conference that has been affiliated with the NCAA's Division I since 1976. Originally a non-football conference, the Sun Belt began sponsoring football in 2001. Its football teams participate in the Division I Football Bowl Subdivision (FBS). The 12 member institutions of the Sun Belt are distributed primarily across the southern United States.

Central Florida left the league following the 1991–92 academic year due to a dispute over television rights, among other reasons. [2] [3] Lamar, Texas–Pan American, and Jacksonville departed at the end of the 1997–98 academic year. Florida International University joined the Sun Belt in 1998, and the University of Denver was added in 1999. Louisiana Tech departed after the 2000–01 academic year. 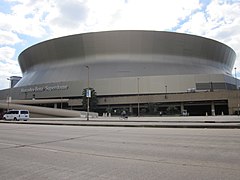 The Sun Belt Conference headquarters are currently housed at the Mercedes-Benz Superdome.

The conference did not sponsor football until 2001, when the league added former Big West Conference members New Mexico State University and the University of North Texas and former Ohio Valley Conference member (an FBS Independent on football) Middle Tennessee State University as full members (all three of them joined a year earlier for all sports in the 2000-01 school year) and added FBS Independent University of Louisiana at Monroe and Big West member University of Idaho as "football-only" members. These new members gave the Sun Belt seven football playing members in their first season, as Arkansas State and Louisiana–Lafayette were already full members which sponsored football. Another Big West school, Utah State University, was added as a "football-only" member in 2003, then departed in 2005 with Idaho and New Mexico State for the Western Athletic Conference (WAC).

Longtime Sun Belt member Western Kentucky joined the Sun Belt's football conference in 2009 after its Board of Regents voted to upgrade the school's football program to Division I FBS. [4]

On November 11, 2009, New Orleans announced it was investigating a move from Division I to the NCAA's Division III. In order to maintain athletic scholarships, UNO instead opted for entry into Division II. On April 20, 2011, UNO officially received transition approval from the NCAA Division II Membership Committee. [5] (UNO later decided to remain in Division I, and joined the Southland Conference in 2013.)

On April 9, 2012, Georgia State, one of the founding members of the Sun Belt Conference, announced that it would be returning to the conference as a full member in 2013. As part of the move, the football program began a transition from FCS to FBS in the 2012 season; it played a full Sun Belt schedule as a "transitional" FBS member in 2013, and became a full FBS member, with bowl eligibility, in 2014. [6] On May 2, 2012, Texas State University announced it would leave the WAC after just one year and join the Sun Belt in July 2013 to begin play for the 2013–14 academic year. At the press conference to announce Texas State's addition, Sun Belt Commissioner Karl Benson also hinted that more changes could be on the way for the conference. [7] On May 25, 2012, the conference announced that the University of Texas at Arlington (a non-football member) had accepted an invitation to join the conference and would become a full member by 2013. [8]

These moves depleted the Sun Belt and made the need to expand their membership more urgent than ever, as the Sun Belt was left with ten full members and only eight members that sponsor football (the minimum number required for a conference to sponsor football at the FBS level) for the 2013 season. Appalachian State University accepted an invitation on March 27, 2013 to join the Sun Belt effective July 1, 2014. [12] Georgia Southern University accepted a similar Sun Belt invitation at the same time as Appalachian State. [13] Appalachian State and Georgia Southern both joined for all sports from the Southern Conference on July 1, 2014. Both schools had been very successful within the Football Championship Subdivision, combining to win nine national championships since 1985. They upgraded to the Football Bowl Subdivision, and were eligible for Sun Belt conference championships in 2014, but were not postseason-eligible in football until 2015.

On September 1, 2015, Coastal Carolina University accepted an invitation to join the Sun Belt Conference. The university joined in all sports except for football starting July 1, 2016, with football joining in 2017. [18]

The conference announced on March 1, 2016, that the affiliation agreement with Idaho and New Mexico State would not be extended past the 2017 season. [19]

The conference announced that beginning in 2018, the conference (10 teams) will be divided into two divisions for football: East: Appalachian State, Coastal Carolina, Georgia Southern, Georgia State, and Troy; West: Arkansas State, Louisiana, Louisiana–Monroe, South Alabama, and Texas State. The winner of each division will meet in the Sun Belt Championship game. [20]

On October 12, 2011, ESPN reported that Wright Waters would retire, effective July 1, 2012. [35] On February 15, 2012, Karl Benson was hired as the new commissioner of the Sun Belt, after having been the commissioner of the Western Athletic Conference for 17 years. Waters would later move his departure date to March 15, allowing Benson to take over at that time. [6]

As of the upcoming 2021–22 school year, the Sun Belt Conference sponsors championship competition in eight men's and nine women's NCAA sanctioned sports. [36] The most recent change to sports sponsorship is the dropping of men's soccer after the 2020–21 school year.

Member-by-member sponsorship of the nine men's SBC sports for the 2020–21 academic year.

Men's varsity sports not sponsored by the Sun Belt Conference which are played by Sun Belt schools:

Member-by-member sponsorship of the nine women's SBC sports for the 2020–21 academic year.

Women's varsity sports not sponsored by the Sun Belt Conference which are played by Sun Belt schools:

"RS" is regular season, "T" is tournament. Championships from the previous academic year are flagged with the calendar year in which the most recent season or tournament ended.

The Sun Belt first began sponsoring football in 2001. It originally consisted of seven football playing schools, three of which are still members of the conference. Up until 2009, the conference only had a contract with one bowl, the New Orleans Bowl. Following the Sun Belt's improved football success and geographical membership changes, other bowls began to sign contracts with the Sun Belt Conference. As of November 2019 [update], the conference has six bowl game tie-ins.

Throughout the years, the conference has experienced flux in membership changes, similar to many other FBS conferences. The conference announced that beginning in 2018, the conference (10 teams after the departure of Idaho and New Mexico State) [39] will be divided into two divisions for football: East: Appalachian State, Coastal Carolina, Georgia Southern, Georgia State, and Troy; West: Arkansas State, Louisiana, Louisiana–Monroe, South Alabama, and Texas State. The winner of each division will meet in the Sun Belt Championship game. [40]

As of the 2019–20 NCAA football bowl games, the Sun Belt Conference has tie-ins with the following bowl games:

Since the 2018–19 season, the Sun Belt Conference Men's and Women's Basketball Tournaments, held in early March, have involved only 10 of the conference's 12 teams, and have been bracketed in a semi-stepladder format. The bottom four seeds play in the first round; the 5 and 6 seeds receive byes to the second round, the 3 and 4 seeds to the quarterfinals, and the top two seeds to the semifinals. The semifinals and finals are held in New Orleans; the 2019 men's and women's events were at Lakefront Arena, and from 2020 will be at Smoothie King Center. [44] Winners of the tournaments earn automatic bids to their respective NCAA Division I Basketball Tournament.

Two of the Sun Belt's member schools, Georgia State and UT Arlington are doctorate-granting universities with "very high research activity," the highest classification given by the Carnegie Foundation for the Advancement of Teaching. [52]

Appalachian State is also currently ranked as one of the Top 10 regional schools in the South by the U.S. News & World Report.