Pinus lambertiana (commonly known as the sugar pine or sugar cone pine) is the tallest and most massive pine tree, and has the longest cones of any conifer. The species name lambertiana was given by the British botanist David Douglas, who named the tree in honour of the English botanist, Aylmer Bourke Lambert. It is native to coastal and inland mountain areas along the Pacific coast of North America, as far north as Oregon and as far south as Baja California in Mexico. 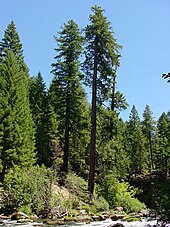 The sugar pine occurs in the mountains of Oregon and California in the western United States, and Baja California in northwestern Mexico; specifically the Cascade Range, Sierra Nevada, Coast Ranges, and Sierra San Pedro Martir.

The massive 31 gigabase mega-genome of sugar pine has been sequenced in 2016 by the large PineRefSeq consortium. [5] This makes the genome one of the largest sequenced and assembled so far. [5] 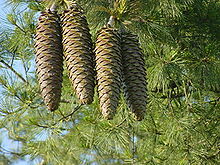 In late stage of embryonal development, the sugar pine embryo changes from a smooth and narrow paraboloid to a less symmetric structure. This configuration is caused by a transverse orientation of division planes in the upper portion of the embryo axis. The root initial zone is established, and the epicotyl develops as an anlage flanked by regions of that define the cotyledonary buttresses. At this stage, the embryo is comprised of the suspensor, root initials and root cap region, hypocotyl-shoot axis, and the epicotyl. The upper (distal) portion of the embryo, which gives rise to the cotyledons and the epicotyl, is considered to be the shoot apex. [7]

The apex has the following four zones: [8]

Naturalist John Muir considered sugar pine to be the "king of the conifers". The common name comes from the sweet resin, which Native Americans used as a sweetener. [9] John Muir found it preferable to maple sugar. [10] It is also known as the great sugar pine. The scientific name was assigned by David Douglas in honor of Aylmer Bourke Lambert. 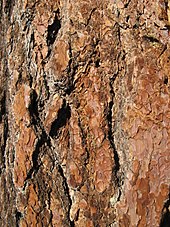 Bark of a sugar pine on Mount San Antonio

The odorless wood is also preferred for packing fruit, as well as storing drugs and other goods. Its straight grain also makes it a useful organ pipe material. [11]

The large size and high nutritional value of the sugar pine seeds are appealing to many species. Yellow pine chipmunks ( Neotamias amoenus) and Steller’s jays ( Cyanocitta stelleri) gather and hoard sugar pine seeds. Chipmunks gather wind-dispersed seeds from the ground and store them in large amounts. Jays collect seeds by pecking the cones with their beaks and catching the seeds as they fall out. Although wind is a main dispersion factor of sugar pine seeds, animals tend to collect and store them before the wind can blow them far. [12]

Black bears ( Ursus americanus) rely on sugar pine seeds for their food source in the fall months within the Sierra Nevada mountains. There is relationship between sugar pine seeds and oak acorns as the bears would feed on those that are in a higher supply for that season. Both sugar pine and oak species are currently in decline, which can have a direct effect on black bear food sources within the Sierra Nevada. [13]

Sugar pine trees have been impacted by the invasive species of mountain pine beetles ( Dendroctonus ponderosae) that are native to western North America. The beetles lay their eggs inside of the tree and inhibit the trees ability to defend itself against the invading species. The beetles also feed from the trees nutrients which slowly weakens the trees overall health, making the pines more susceptible to other threats like fires and fungal infections by white pine blister rust. [14] Blister rust can weaken the tree and enable further infestation by mountain pine beetles due to the lack of defense from the sugar pine. [15] 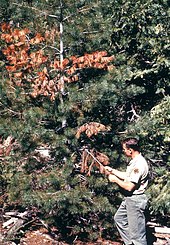 The sugar pine has been severely affected by the white pine blister rust ( Cronartium ribicola), [16] a fungus that was accidentally introduced from Europe in 1909. A high proportion of sugar pines have been killed by the blister rust, particularly in the northern part of the species' range that has experienced the rust for a longer period of time. The rust has also destroyed much of the Western white pine and whitebark pine throughout their ranges. [17] The U.S. Forest Service has a program (see link below) for developing rust-resistant sugar pine and western white pine. Seedlings of these trees have been introduced into the wild. The Sugar Pine Foundation in the Lake Tahoe Basin has been successful in finding resistant sugar pine seed trees and has demonstrated that it is important for the public to assist the U.S. Forest Service in restoring this species. However, blister rust is much less common in California, and sugar, Western white and whitebark pines still survive in great numbers there. [18]

Sugar pine tree mortality has been directly linked to dryer conditions and higher temperatures. Sugar pine trees grow in western North America, a region already impacted by climate change. Higher temperatures within a sugar pine forest can lower resin levels within the tree which will cause less protection against pathogens. At the same time when the warmer winters make the survival of the pests and pathogens more likely. The weakened or dying trees then provide fuel to the forest fires, which may become more frequent and more intense, if the climate change results in warmer temperatures in summer, particularly if coupled with drier conditions and stronger winds. [19]

Sugar pine trees are in a slow decline because of the several threats it faces: white pine blister rust, mountain pine beetles and climate change. Efforts to restore sugar pines and other white pine trees that have been impacted by invasive species, climate change and fires have been undertaken by governmental and non-governmental entities. One of the latter is a non-for-profit organization called Sugar Pine Foundation created in 2004 to plant sugar pine seeds in the Sierra Nevada along the border of California and Nevada. [18] They plant seedlings grown from seeds collected from blister rust resistant trees. In order to identify if the trees resistant to that pathogen, Sugar Pine Foundation tested over 500 sugar pine trees and have found 66 resistant trees. [18] The foundation is building a sugar pine population that is resistant to white pine rust because the fungus is a major threat and will continue to kill sugar pine trees at a very high rate. [20]

In the Achomawi creation myth, Annikadel, the creator, makes one of the 'First People' by intentionally dropping a sugar pine seed in a place where it can grow. One of the descendants in this ancestry is Sugarpine-Cone man, who has a handsome son named Ahsoballache. [21]

After Ahsoballache marries the daughter of To'kis the Chipmunk-woman, his grandfather insists that the new couple have a child. To this end, the grandfather breaks open a scale from a sugar pine cone, and secretly instructs Ahsoballache to immerse the scale's contents in spring water, then hide them inside a covered basket. Ahsoballache performs the tasks that night; at the next dawn, he and his wife discover the infant Edechewe near their bed. [21]