Buscemi has also had a prolific career in television. From 2010 to 2014, Buscemi starred in the lead role as Enoch "Nucky" Thompson in the critically acclaimed HBO television series Boardwalk Empire created by Terence Winter. His performance earned him two Screen Actors Guild Awards, a Golden Globe and two nominations for an Emmy Award. His other television roles include The Sopranos (2004, 2006), 30 Rock (2007–2013), Portlandia (2014–2017) and Miracle Workers (2019–present). Buscemi starred in a leading role in comedian Louis C.K.'s tragicomedy web series Horace and Pete (2016). He made his directorial film debut with Trees Lounge (1996), which he also wrote and starred in. Following this, he directed Animal Factory (2000), Lonesome Jim (2004), and Interview (2007).

Multiple film critics and media outlets have cited Buscemi as one of the best actors never to have received an Academy Award nomination. [3] [4]

Steven Vincent Buscemi [5] was born on December 13, 1957, [6] in the borough of Brooklyn in New York City, to Dorothy (Wilson) and John Buscemi. [5] [7] His father was a sanitation worker and served in the Korean War, and his mother was a hostess at Howard Johnson's. Buscemi's paternal ancestors were from the town of Menfi in Sicily, and his mother is of Irish, English, and Dutch ancestry. [8] [9] He has two brothers: Ken and Michael. Michael is also an actor. Buscemi was raised Catholic. [9]

When Buscemi was 10 years old, the family moved from East New York to Valley Stream in Nassau County. [10] Buscemi graduated in 1975 from Valley Stream Central High School along with future writer Edward J. Renehan, Jr. and future actress Patricia Charbonneau. In high school, Buscemi wrestled for the varsity squad and participated in the drama troupe. (Buscemi's 1996 film Trees Lounge, in which he starred and served as screenwriter and director, is set in and was largely shot in his childhood village of Valley Stream. [11]) Buscemi briefly attended Nassau Community College before moving to Manhattan to enroll in the Lee Strasberg Institute.

Buscemi made his acting debut in the 1985 film The Way It Is, directed by Eric Mitchell, which was part of the no wave cinema movement. Other early performances include Parting Glances (1986) as well as an appearance in an episode of the television series Miami Vice in 1986. [12]

In 1989, he appeared in four films, including James Ivory's comedy Slaves of New York, Howard Brookner's ensemble period film Bloodhounds of Broadway and the New York Stories segment directed by Martin Scorsese entitled, "Life Lessons" starring alongside Nick Nolte and Rosanna Arquette. The film screened out of competition at the 1989 Cannes Film Festival to mixed reviews with the Scorsese segment being hailed as the standout by Roger Ebert. [13] Buscemi also appeared in Jim Jarmusch's independent film Mystery Train (1989) as Charlie the Barber, and was nominated for the Independent Spirit Award for Best Supporting Male. [14]

In 1990, he played Mink in the Coen Brothers' neo-noir gangster film Millers Crossing starring opposite Gabriel Byrne, Marcia Gay Harden, and John Turturro. [15] This was the first of five of the Coen Brothers' films in which Buscemi performed. Critic Roger Ebert described the film as one that "It is likely to be most appreciated by movie lovers who will enjoy its resonance with films of the past." [16]

Also that year, he starred as Test Tube, a henchman of Laurence Fishburne's character Jimmy Jump in Abel Ferrara's crime film King of New York, [17] as well as Edward in the anthology film Tales from the Darkside: The Movie, the protagonist of the "Lot 249" segment of the film. [18] 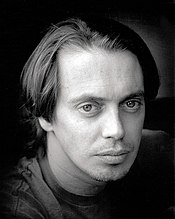 In 1991, he played a bellboy, Chet, in the Coen Brothers film black comedy Barton Fink starring John Turturro and John Goodman. [19] His first lead role was as Adolpho Rollo in Alexandre Rockwell's In the Soup (1992). [20] He gained wider attention for his supporting part as pseudonymous criminal Mr. Pink in Quentin Tarantino's crime film Reservoir Dogs (1992), [21] a role that Tarantino originally wrote for himself, [15] and one that earned Buscemi the Independent Spirit Award for Best Supporting Male in his second nomination. [22] Also in 1992, he had a guest role as Phil Hickle, Ellen's father and older Pete's guidance counselor, in The Adventures of Pete and Pete. [23] The following year, he starred as the eponymous character in the critically panned [24] horror comedy film Ed and His Dead Mother. He also appeared in a cameo appearance in Tarantino's next film, Pulp Fiction, where he portrays a waiter dressed as Buddy Holly who serves Mia Wallace and Vincent Vega. [25] He endeared himself to comedy fans as Rex, bass player of The Lone Rangers, in the 1994 comedy Airheads. In 1995, Buscemi guest-starred as suspected murderer Gordon Pratt in " End Game", an episode of the television series Homicide: Life on the Street. Buscemi was rumored to be considered for the role of The Scarecrow in Joel Schumacher's proposed fifth installment of the first Batman franchise, Batman Unchained, before Warner Bros. cancelled the project. [26] 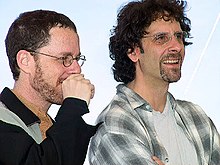 Throughout the late-1990s, Buscemi appeared in several films by the Coen Brothers (Joel and Ethan)

The next year, Buscemi again collaborated with the Coen Brothers, starring as kidnapper Carl Showalter in the black comedy crime film Fargo starring Frances McDormand and William H. Macy. [27] The film was a critical and commercial success debuting at the 1996 Cannes Film Festival where it competed for the Palme d'Or. Subsequently, he gained a reputation as character actor, [28] with supporting roles in the blockbuster action films as Garland Greene in Simon West's Con Air (1997) and Rockhound in Michael Bay's Armageddon (1998). Buscemi also appeared as Donny in the Coen's cult classic black comedy film The Big Lebowski (1998). [29] 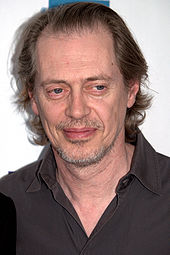 Buscemi at the 2009 Tribeca Film Festival

In 2004, Buscemi joined the cast of the television series The Sopranos as Tony Soprano's cousin and childhood friend, Tony Blundetto, a role that earned him an Emmy Award nomination. [33] Buscemi had previously contributed to the show as director of the third-season episode " Pine Barrens", which was one of the most critically acclaimed episodes of the series, and the fourth-season episode " Everybody Hurts". [34] He appeared in episode three of season 6 as a doorman in the afterlife, which is portrayed as a country club in Tony Soprano's dream. He also directed the episodes " In Camelot", the seventh episode of season 5, and " Mr. & Mrs. John Sacrimoni Request...", the fifth episode of season 6. As well, he appeared in the music video for Joe Strummer's cover version of Bob Marley's " Redemption Song". [35]

Buscemi starred in the HBO drama series Boardwalk Empire created by Terence Winter. The series started in 2010, where Buscemi assumed the role as Enoch "Nucky" Thompson (based on Enoch L. Johnson), a corrupt Atlantic City politician who rules the town during the Prohibition era. He won a Golden Globe Award for Best Actor – Television Series Drama for the role. In 2011 he hosted NBC's Saturday Night Live. [36] [37]

He hosts, directs, and produces his own web series talk show, Park Bench with Steve Buscemi, which debuted in May 2014. [38] Buscemi won the Primetime Emmy Award for Outstanding Short Form Variety Series for the series in 2016. In January 2016, Buscemi began co-starring alongside Louis C.K. and Alan Alda in C.K.'s acclaimed comedy-drama web series Horace and Pete. [39] In an interview with The Hollywood Reporter, Buscemi was the first actor to sign on to the project; with Boardwalk Empire over he was available to star in the series. The two reportedly "met up in New York City where C.K. pitched the still evolving series idea to Buscemi. He signed on, on the spot, to play C.K.’s brother, Pete". [40]

In February 2020, Buscemi was cast as Chebutykin in a New York Theatre Workshop revival of Anton Chekov's Three Sisters alongside Greta Gerwig, Oscar Isaac, and Chris Messina. The production was supposed to begin May 13, but was cancelled due to the COVID-19 pandemic with no return date set. [42]

Buscemi has also worked as a director, making his directing debut in the 1990s. His directorial credits include:

In addition to feature films, he directed episodes of the television shows Love, Homicide: Life on the Street, The Sopranos, Oz, 30 Rock, Portlandia, and Nurse Jackie. In the latter, his brother Michael played the character God in several episodes. While scouting a location for a film, Buscemi visited the Philadelphia Eastern State Penitentiary and found the building so interesting that he later provided the majority of the narration for the audio tour there. [43] [44]

Buscemi and Lou Reed at a screening of the film Iraq for Sale: The War Profiteers in 2006

In an interview with The Hollywood Reporter, Buscemi was adamant about not altering his misaligned teeth, saying, "I've had dentists who have wanted to help me out, but I say, 'You know, I won't work again if you fix my teeth.'" [45] [46] Buscemi is noted for wrinkles around his eyes, giving them an aged appearance. "Buscemi eyes" describes the result when his eyes are photo-edited onto others' faces. He has stated that although he did not find this amusing, his wife Jo Andres did. [47]

Buscemi guest-starred in season 6 episode 7 of 30 Rock as a private investigator. Playing against his image, during a flashback he appears to be disguised as a teenager as he says that he was "part of a special task force of very young-looking cops who infiltrated high schools". [48] [49] His character's disguise became an internet meme. [50]

The 1999 hit song " Hey Leonardo" referenced Buscemi as "that guy who played in Fargo".

Buscemi grew up pronouncing his name as boo-SEM-ee, in an anglicised way. In Sicily, where his ancestors are from, it is pronounced as boo-SHEM-ee. [51] He once remarked, "I had to go to Sicily to find out I pronounce my name wrong." [1]

Buscemi was a New York City firefighter from 1980 to 1984, with Engine Company No. 55, in the Little Italy section of New York. The day after the September 11 attacks in New York, he returned to his old firehouse to volunteer; he worked twelve-hour shifts for a week, and dug through rubble looking for missing firefighters. [52] On May 25, 2003, Buscemi was arrested with nineteen other people while protesting the closing of a number of firehouses, including Engine 55. [53]

In April 2001 while in Wilmington, North Carolina, shooting the film Domestic Disturbance Buscemi was stabbed multiple times after intervening in a bar fight between Vince Vaughn, Scott Rosenberg, and two local men. He was released from hospital after treatment. [56]

As a guest in episode 13 of the genealogy series Who Do You Think You Are?, he traced his maternal ancestry to Julia Vanderhoof and Ralph B. Montgomery (1834–1878), individuals of Dutch and English descent, respectively. The program aired on March 25, 2011.

In the middle of 2011, he joined rallies against the threat of the closing of eight Brooklyn firehouses during the administration of Mayor Michael Bloomberg, saying "Closing [these firehouses] is no way to protect New York." [57]

In 2014, Buscemi starred in and narrated the HBO documentary A Good Job: Stories of the FDNY, in which he revisited his work with fellow firefighters. He shares their stories, including those from September 11. [58]

Buscemi is a noted fan of the musical group Beastie Boys. Along with several other stars, he appears in the music video for the band's 2011 song " Make Some Noise", which was nominated for MTV Video of the Year. [59] He also has a post-credit scene in the Spike Jonze–directed documentary Beastie Boys Story in which he pokes fun at the commercial failure of the group's second studio album, Paul's Boutique; "When the tree fell in the forest, nobody heard that shit," jokes Buscemi. [60] Buscemi sang in "The Broadway Song" for Lou Reed's 2003 album The Raven. [61]

Buscemi currently resides in Park Slope, Brooklyn, where he was given the key to the city in 2021. He previously resided in Sunset Strip, Los Angeles. [62]

Buscemi has an extensive body of work in both film and television dating back to the 1980s.

In 2014, Buscemi was named Honorary Battalion Chief by the New York City Fire Department after his early career serving as a fireman, and for his return to the service during 9/11. He worked 12 hour shifts for several days alongside other firefighters, searching for survivors in the rubble from the World Trade Center. [63]