Steppenwolf was an American-Canadian rock band that was prominent from 1968 to 1972. The group was formed in late 1967 [1] [2] in Los Angeles by lead singer John Kay, keyboardist Goldy McJohn, and drummer Jerry Edmonton, all formerly of the Canadian band the Sparrows. [5] Guitarist Michael Monarch and bass guitarist Rushton Moreve were recruited via notices placed in Los Angeles-area record and musical instrument stores.

In 1965 John Kay joined the Sparrows, a popular Canadian band, and was followed by Goldy McJohn. The group eventually broke up. [10]

In late 1967, Gabriel Mekler urged Kay to re-form the Sparrows and suggested the name change to Steppenwolf, inspired by Hermann Hesse's novel of the same name. [11] [5] [10] Steppenwolf's first two singles were "A Girl I Knew" and "Sookie Sookie". The band finally rocketed to worldwide fame after their third single, "Born to Be Wild", was released in 1968, as well as their version of Hoyt Axton's " The Pusher". Both of these tunes were used prominently in the 1969 counterculture cult film Easy Rider (both titles originally had been released on the band's debut album). [5] In the movie, "The Pusher" accompanies a drug deal, and Peter Fonda stuffing dollar bills into his Stars and Stripes-clad fuel tank, after which "Born to Be Wild" is heard in the opening credits, with Fonda and Dennis Hopper riding their Harley choppers through the America of the late 1960s. The song, which has been closely associated with motorcycles ever since, introduced to rock lyrics the signature term " heavy metal" [5] (though not about a kind of music, but about a motorcycle: "I like smoke and lightning, heavy metal thunder, racin' with the wind..."). Written by Sparrow guitarist Dennis Edmonton, who had begun using the pen name Mars Bonfire and inspired by a billboard roadside advertisement Bonfire liked which depicted a motorcycle tearing through the billboard artwork, the song had already reached number two on the Billboard Hot 100 in August 1968. [5] It sold over one million copies, and was awarded a gold disc. [12]

In 1968, Steppenwolf played one of their biggest shows up to that time at the Fillmore East to rave reviews, sharing the bill with Buddy Rich and Children of God. [13] On November 27, 1968, they played a concert with Iron Butterfly at the Baltimore Civic Center.

The group's following albums had several more hit singles, including " Magic Carpet Ride" (which reached number three) from The Second and "Rock Me" (with its bridge lasting 1:06, which reached number 10) from At Your Birthday Party. [5] It also sold in excess of a million units. [12] Monster, which questioned US Vietnam War policy, was the band's most political album. Following the Monster album from 1969, the following year, the band released Steppenwolf 7, which included the song "Snowblind Friend", another Hoyt Axton-penned song about the era and attitudes of drugs and associated problems. [14] The band lineup for their live performances in the middle of 1970 was John Kay, Jerry Edmonton, Goldy McJohn, Larry Byrom, and George Biondo. This lineup was also unable to remain together, as Byrom became upset with McJohn over personal issues and quit the band in the early part of 1971.

Several changes in the group's personnel were made after the first few years. [5] Moreve was fired from the group in 1968 for missing gigs after he became afraid to return to Los Angeles, convinced by his girlfriend that it was going to be leveled by an earthquake and fall into the sea. Rob Black briefly filled in for Moreve until former Sparrow bandmate Nick St. Nicholas came aboard in the latter months of 1968. Monarch quit the group in August 1969 as his relationship with Kay deteriorated. Larry Byrom, who had been in TIME with Nick St. Nicholas, ably replaced Monarch. [14] Nick St. Nicholas was let go in mid-1970. He had supposedly appeared in nothing but rabbit ears and a jock strap at the Fillmore East in April 1970 [15] – and his habit of wearing muumuus and kaftans on stage began to wear on Kay, whose penchant for leather vests and pants was more in line with the image he wanted for the band. George Biondo was then recruited, and guitarist Kent Henry replaced Byrom in early 1971. [5] In November 1971, the band released For Ladies Only, with the lineup consisting of Kay, Henry, Biondo, McJohn, and Edmonton. The album was notable for several reasons, most notably the controversial LP inside cover art, the romantic, political, and social lyrical content, and the fact that it featured several of the group members on lead vocals.

The band broke up after a farewell concert in Los Angeles on Valentine's Day, 1972. [14] Kay went on to a brief solo career, scoring a minor solo hit in 1972 with "I'm Movin' On" from his album Forgotten Songs and Unsung Heroes. Although it received generally high marks from most critics, the album sales were disappointing in the US. [5] Kay released a second solo album in 1973 on the Dunhill label titled My Sportin' Life. This album sold less than his first solo album and was less gritty and more LA studio-polish in sound.

Following the first official breakup of Steppenwolf, and after the release of Kay's first solo album, a late summer and autumn 1972 tour in the US and Europe occurred, which featured Kay heading both the John Kay Band and Steppenwolf, at the top of the bill. Dunhill had released an album of a collection of Steppenwolf songs titled Rest in Peace. Thus, the tour was known as the RIP tour. [16] The John Kay Band included Hugh Sullivan on keyboards and Whitey (Pentti) Glan on drums (both were contributors to John Kay's first solo album). Kent Henry on lead and slide guitar and George Biondo on bass joined Kay in both lineups. The Steppenwolf band lineup featured Goldy McJohn on keyboards and Jerry Edmonton on drums. This tour proved to be a fairly positive experience for all of the musicians and drew respectable crowd turnouts.

Following this tour, while Kay was recording his second solo album in 1973, McJohn and Edmonton continued to play and formed a band called Manbeast. Some of the material created in the Manbeast days showed up on the 1974 Steppenwolf reunion album "Slow Flux", most notably "Gang War Blues", which was recorded as a demo with Edmonton singing slightly different lyrics.

Steppenwolf reformed in 1974 with its core lineup of Kay, Edmonton, and McJohn, along with longtime bassist Biondo and newcomer Bobby Cochran, Eddie Cochran's nephew, on lead guitar. [5] The band signed with Mums Records in retaliation for what Kay perceived as a lack of support by Dunhill Records for his solo albums. Their first reunion album was Slow Flux, which included their last top 40 hit, "Straight Shootin' Woman". [5] In February 1975, McJohn was dismissed for what Kay described as a decline in the quality of his performances, as well as erratic behavior. McJohn was replaced by Andy Chapin on Hour of the Wolf in 1975, though McJohn appeared in artwork for the single to Caroline. After the album peaked at number 155, Kay attempted to dissolve the band again, but the label, now having been absorbed by Epic Records, insisted Steppenwolf record one more album to satisfy their contractual obligations. The ensuing album, Skullduggery (1976), featuring Wayne Cook on keyboards, was released without a tour to support it, and by the early fall of 1976, Steppenwolf disbanded a second time. Kay appeared in a segment of the popular music TV show The Midnight Special to announce the end of Steppenwolf and also played a solo version of the song "Hey I'm Alright". This song appeared on Kay's third solo album All In Good Time, released on Mercury Records in 1978. [5]

After Kay disbanded Steppenwolf, former members Goldy McJohn and Nick St. Nicholas formed a "revival act" called "New Steppenwolf". McJohn did not last long, but St. Nicholas continued with the venture for several years. Various incarnations included, according to author Dave Thompson, a "revolving door of musicians" consisting of "jobbing players". [17] Among those players were vocalist Tom Holland and drummer Steve Riley of future W.A.S.P. and L.A. Guns fame. Glen Bui who went on to work with Goldy McJohn until he died in 2017. The Rolling Stone Encyclopedia of Rock & Roll described these bands as "unprofessional, bogus versions" of Steppenwolf. [10] Although Kay and Edmonton had originally licensed the use of the "New Steppenwolf" name, they later sued for breach of the contract. St. Nicholas agreed in 1980 to cease use of the name, but legal disputes about promotional use of the Steppenwolf name continued until 2000. [18] 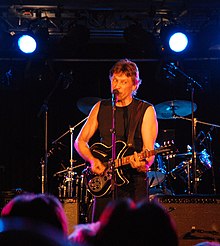 Kay and Steppenwolf performing in Lillehammer, Norway, May 2007

Kay had a few meetings with David Pesnell about management, concert promotions, and producing a new album for the band. Pesnell wanted to produce an album featuring new songs on side A, by the reformed band Three Dog Night and with side B of the album featuring songs by Steppenwolf. The album's working name was "Back to Back", a play on each band having a side of the album and the fact the bands were back together again. Pesnell's concept was simple: each band should record four new songs, with a fifth song on each side featuring a medley of the band's past songs. This would give the Pesnell-produced album a double release of singles to support a concert tour featuring the two bands. Though both bands liked the concept of the album and tour, the arguments included who would be side A and side B and which of the two would headline the upcoming concert tour.

The reformed John Kay and Steppenwolf line-up featured John Kay, Michael Palmer (guitars, backing vocals), Steve Palmer (drums, backing vocals), Danny Ironstone (keyboards, backing vocals), and Kurtis Teel on bass. The Palmer brothers had played in a group called Tall Water and had also been involved with Kay in his solo career playing live gigs in the late 1970s. Teel was replaced by Chad Peery and Ironstone by Brett Tuggle by 1981, and the new grouping released Live in London overseas. Tuggle was then displaced by Michael Wilk and a new studio album, Wolftracks, was released in 1982 on the small Attic (Nautilus & Allegiance Records in the U.S.) record label. Wolftracks was one of the earliest digitally recorded albums in the industry. It was recorded live on a two-track Sony digital recording system. Bassist Welton Gite, who appeared on this album, left shortly after its completion and was replaced by Gary Link, formerly with Dokken. Another album, Paradox, followed in 1984.

In December 1984 the band as it was disbanded and Kay and Wilk decided to continue on in early 1985 with a pared-down quartet composed of Kay, Wilk, Wilk's friend Ron Hurst (drums, backing vocals), and Rocket Ritchotte (guitars, backing vocals). Wilk also handled bass duties from his sequencing computer keyboards from then on. This line-up released Rock N' Roll Rebels (1987) and Rise & Shine (1990); these were on the Qwil and I.R.S. Records imprints, respectively. Ritchotte had departed temporarily in 1989 to be replaced by Les Dudek and then Steve Fister, but then returned in 1990 for three more years. Fister (ex- Iron Butterfly) came back in late 1993, but turned guitar duties over to Danny Johnson (formerly of Derringer, Rod Stewart, and others) in 1996.

As the band was named after the novel Der Steppenwolf by German author Hermann Hesse, who was born in the Black Forest town of Calw, the city invited them to come over and play in the International Hermann-Hesse-Festival 2002, [19] along with other bands inspired by Hesse, such as Anyone's Daughter. The concert drew considerable media coverage, with Kay's fluent German stunning those who did not know beforehand about his growing up in Germany – in fact, he was born Joachim Fritz Krauledat in Tilsit, East Prussia, Germany (now Sovetsk, Kaliningrad Oblast, Russia).

The band performed what they then labeled their "Farewell Concert" on October 6, 2007, at Ripken Stadium in Aberdeen, Maryland, featuring Kay, keyboardist and programmer Michael Wilk, drummer Ron Hurst and guitarist Danny Johnson. However, the band, rejoined by bassist Gary Link, began touring again in June 2009. [20]