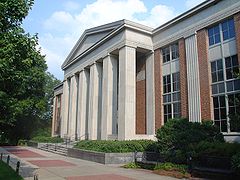 Ilah Dunlap Little Library, the main library at the University of Georgia

A state university system in the United States is a group of public universities supported by an individual state, territory or federal district. These systems constitute the majority of public-funded universities in the country. Each state supports at least one such system.

State university systems should not be confused with federally funded colleges and universities, at which attendance is limited to military personnel and government employees. Members of foreign militaries and governments also attend some schools. These schools include the United States service academies, Naval Postgraduate School, and military staff colleges.

A state university system normally means a single legal entity and administration, but may consist of several institutions, each with its own identity as a university. Some states—such as California and Texas—support more than one such system.

State universities get subsidies from their states. The amount of the subsidy varies from university to university and state to state, but the effect is to lower tuition costs below those of private universities for students from that state or district. As more Americans have attended college and private tuition rates have increased well beyond the rate of inflation, admission to state universities has become more competitive. [1]

State university systems were a product of the demand for higher education in the newly formed United States. The tradition of publicly funded state colleges began primarily in the southern states, where in the east and northeastern states other private educational institutions were already established. There remains significant debate about which institution or institutions are the oldest public universities in the United States.

The University of Georgia is the country's first chartered public university, established on January 27, 1785 by an act of the General Assembly of Georgia. However, the University of Georgia did not hold classes until 16 years later in the fall of 1801. The first collegiate-level classes conducted by a public institution were at another Georgia institution, the Academy of Richmond County, chartered in 1783 with instruction beginning in 1785. While the Academy, later known as Augusta State University and now merged into Augusta University, was founded as a high school, it taught college-level classes from its creation, and its graduates were accepted into four-year colleges as sophomores or juniors, effectively making it a combination of a modern high school and community college. The school eventually dropped high school instruction, but remained a community college until becoming a four-year institution in 1963.

Castleton University in Vermont is the oldest state university in New England, chartered in 1787. This was soon followed by the charter of The University of Vermont (UVM) in 1791. However, neither institution was a "state university" in the modern sense of the term until many decades later. Castleton began as the Rutland County Grammar School. It did not become a postsecondary institution until the campus became home to the State Normal School in 1867. Although the school became state-supported at that time, its campus remained privately owned until 1912. UVM was chartered as a private institution and did not become a public university until 1865. The first institution in New England to actually operate as a public university is Westfield State University in Massachusetts, which has been public since its founding in 1838.

Consideration of public higher education was included in the earliest westward expansion of the U.S. with the Northwest Ordinance of 1787, which established the Northwest Territory. It stated: "Religion, morality, and knowledge, being necessary to good government and the happiness of mankind, schools and the means of education shall forever be encouraged." Ohio University (1804) was the first state school so established in the territory (and is also the oldest state university that has continuously operated as a public institution), with the other developing states similarly creating public universities to serve the citizens. On a national basis, the state university system was also assisted by the establishment of the Land-grant universities, under the Morrill Land-Grant Colleges Acts of 1862 and 1890.

Many state universities were founded in the middle 19th century, in particular supported by the Morrill Land-Grant Colleges Acts of 1862 and 1890.

Following the Second World War, many state universities were merged with smaller institutions to achieve economies of scale in administration and also to raise the prestige of the degrees granted by some smaller institutions. A prominent example of this is the State University of New York, which is the largest comprehensive system of universities, colleges, and community colleges in the United States. [2]

There is much diversity between the states in terms of how governing power is distributed between boards of regents (or trustees), presidents, chancellors, provosts, and other senior university executives.

During the growth and restructuring of the state systems, names such as University of California have changed their meanings over time.