California is home to some of most successful collegiate sports teams in the country. Among the list of NCAA schools with the most NCAA Division I championships the Stanford Cardinal, UCLA Bruins, USC Trojans and Cal Berkeley Golden Bears rank #1, #2, #3 and #10 on the list by teams with the most titles, and #1, #4, #2, and #7 by most individual titles, respectively.

Home to some of most prominent universities in the United States, California has long had many respected collegiate sports programs, in particular the University of Southern California, University of California, Berkeley, UCLA, Stanford University, all of which are members of the Pac-12 Conference. They are often nationally ranked in the various sports and dominate media coverage of college sports in the state. In addition, those Universities boast the highest academic standards (on average) of all major college ( NCAA Division I) programs. All 4 schools are ranked, academically, in the top 30 nationally with either Cal or UCLA ranked as the #1 public university in the country (usually #20 overall) and Stanford as the highest academically ranked Division 1A university in the country (usually #5 overall).

According to the list of American universities with Olympic medalist students and alumni the top 4 universities on the list are, #1 USC Trojans (326), #2 Stanford Cardinal (302), #3 UCLA Bruins (270), and #4 Cal Berkeley Golden Bears (223). Also on the list of top 50 universities are, #27 Cal State Long Beach 49ers (47) and #38 UC Irvine Anteaters (33). Referencing a differing source, OlympStats (as of 2017), [2] the all-time total number of Olympic athletes from California universities (1668) was nearly triple the amount from the next state, New York (559). The medal count was even more impressive, with California (678) accounting for more than 4 times the Gold medal count than the next state, Texas (157). 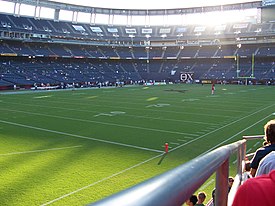 California has produced the most Heisman Trophy winners. Fifteen winners were born in and played high school football in the Golden State. Additionally, Mater Dei High School has produced 3 Heisman winners; more than any other high school in the country.

Seven Of these winners played collegiately at USC and one each at UCLA, Stanford, Army, Texas, Colorado, Notre Dame, Miami, and Alabama

The following California universities are members of NCAA Division I, or are upgrading from Division II to Division I (highlighted in green):

California has hosted the Olympic Games three times. Los Angeles, the largest city in the state, hosted both the 1932 [3] and 1984 Summer Olympics. [4] Squaw Valley, California hosted the 1960 Winter Olympics. [5] Los Angeles and San Francisco were in the race for the United States Olympic Committee nomination to host the 2016 Summer Olympics, but eventually lost to Chicago. Los Angeles will host the Olympic Games for a third time in 2028.

California has also long been a hub for motorsports and auto racing. The city of Long Beach, as part of the IndyCar Series, hosts the Long Beach Grand Prix every year in the month of April. The race that take place in the streets of downtown Long Beach is the longest running major street race held in North America. [6] Long Beach has hosted Formula One events there in the past, and also currently hosts an event on the United SportsCar Championship schedule.

Auto Club Speedway is a speedway in Fontana and currently hosts one NASCAR Cup Series race along with the 2nd-tier Xfinity Series a year. Sonoma Raceway is a multi-purpose facility outside Sonoma, featuring a road course and a drag strip. Different versions of the road course are home to a NASCAR event and an IndyCar event. The drag strip hosts a yearly NHRA event. Mazda Raceway Laguna Seca is a road course near Monterey that currently hosts an ALMS event, a round of the Rolex Sports Car Series and the Rolex Monterey Motorsports Reunion. The Auto Club Raceway at Pomona has hosted NHRA drag racing for over 50 years.

The NASCAR Cup Series holds two races in California, one each at Auto Club Speedway in Fontana (originally named the California Speedway) and at the Sonoma Raceway, formerly Sears Point Raceway. The IndyCar Series competes every April in the Toyota Grand Prix of Long Beach, through the streets of downtown Long Beach. IndyCar also holds an event at Sonoma in the summer. The NHRA Drag Racing Series holds three national events in California, as well; two at Auto Club Raceway at Pomona (formerly Pomona Raceway) and at the aforementioned Sonoma Raceway.

California is widely regarded as the "mecca of MMA" for being the birthplace of the UFC ( Ultimate Fighting Championship), Strikeforce MMA, the WEC ( World Extreme Cagefighting), among other prominent MMA promotion orgs, and also for the quality and quantity of MMA fighters born or bred there. Bruce Lee, a California native, is considered one of the pioneering figures in the development of MMA.

Not only is California a hotbed for producing native-born MMA fighters, but it also draws many elite athletes from around the world with level of training/gyms. California is home to many of the most successful and historic professional MMA gyms: AKA, Alliance MMA, Team Alpha Male, Black House (MMA), Kings MMA, Lion's Den (original), RVCA Training Center, Skrap Pack-Cesar Gracie Fight Team).

Countless of Champions in the sport of MMA are California born or bred, or have their fight training in California.

Skateboarding is a sport heavily associated with California as it is the place where the sport started. Professional skateboarder Tony Hawk was born in Carlsbad, California in 1968 and was involved in many bowl riding and vert competitions there.