From Wikipedia, the free encyclopedia
Structure on top of a roof, skyscraper or tower
For other uses, see Spire (disambiguation).
"Spires" redirects here. For the German city formerly known as Spires in English, see Speyer. 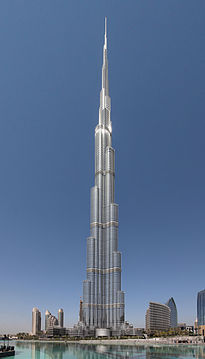 The Burj Khalifa holds the record of the tallest spire in the world, with the height of 223 m (732 ft)

The Taipei 101 had the former tallest spire in the world 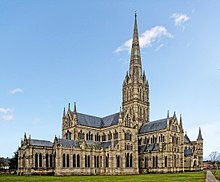 A spire is a tall, slender, pointed structure on top of a roof of a building or tower, especially at the summit of church steeples. [1] A spire may have a square, circular, or polygonal plan, with a roughly conical or pyramidal shape. [1] Spires are typically made of stonework or brickwork, or else of timber structures with metal cladding, ceramic tiling, roof shingles, or slates on the exterior. [1]

Since towers supporting spires are usually square, square-plan spires emerge directly from the tower's walls, but octagonal spires are either built for a pyramidal transition section called a broach at the spire's base, or else freed spaces around the tower's summit for decorative elements like pinnacles. [1] The former solution is known as a broach spire. [1] Small or short spires are known as spikes, spirelets, or flèches. [1] [2]

This sense of the word spire is attested in English since the 1590s, spir having been used in Middle Low German since the 14th century, a form related to the Old English word spir, meaning a sprout, shoot, or stalk of grass. [3] 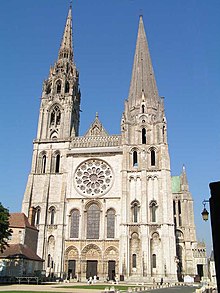 The Gothic church spire originated in the 12th century as a simple, four-sided pyramidal structure on top of a church tower. The spire could be constructed of masonry, as at Salisbury Cathedral, or of wood covered with lead, as at Notre-Dame de Paris. Gradually, spires became taller, slimmer, and more complex in form. Triangular sections of masonry, called broaches were added to the sides, at an angle to the faces of the tower, as at St Columba, Cologne. In the 12th and 13th centuries, more ornament was added to the faces of the spires, particularly gabled dormers over the centres of the faces of the towers, as in the southwest tower of Chartres Cathedral. Additional vertical ornament, in the form of slender pinnacles in pyramid shapes, were often placed around the spires, to express the transition between the square base and the octagonal spire. [4]

The spires of the late 13th century achieved great height; one example was Fribourg Cathedral in Switzerland, where the gabled lantern and spire reached a height of 385 feet (117 meters). In England, a tall needle spire was sometimes constructed at the edge of tower, with pinnacles at the other corners. The western spires of Lichfield Cathedral are an example. [4]

Spires were particularly fragile in the wind, and a number of English Gothic spires collapsed; notably that of Malmesbury Abbey (1180–1500); Lincoln Cathedral (which had been the tallest in the world) 1349–1549; and Chichester Cathedral (1402–1861). The spire of Salisbury Cathedral, completed in 1320 and 404 feet (123 meters) tall, without the tower, required the addition of buttresses, arches and tie irons to keep it intact. Finally, in 1668 the architect Christopher Wren designed reinforcing beams which halted the deformation of the structure. [5]

Openwork spires were a notable architectural innovation, beginning with the spire at Freiburg Minster, in which the pierced stonework was held together by iron cramps. The openwork spire, represented a radical but logical extension of the Gothic tendency toward a skeletal structure. [6] 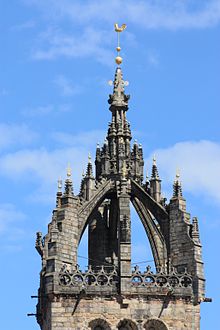 Crown spires have a fully exposed structure of arches not unlike the arches of a medieval European crown. The spire itself is supported by buttress structures. [1]

A needle-spire is a particularly tall and narrow spire emerging from a tower surrounded by a parapet. In general, the term applies to considerably larger and more refined spires than the name Hertfordshire spike. [1]

A Hertfordshire spike is a type of short spire, needle-spire, or flèche ringed with a parapet and found on church-towers in the British Isles. [1]

The roofs of splay-foot spires open out and flatten off at their base, creating eaves above the tower supporting the spire. [1] 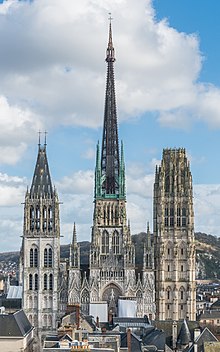 A flèche ( French: flèche, lit. 'arrow' [7]) is a name given to spires in Gothic architecture: in French the word is applied to any spire, but in English it has the technical meaning of a spirelet or spike on the rooftop of a building. [1] [2] In particular, the spirelets often built atop the crossings of major churches in mediaeval French Gothic architecture are called flèches. [2]

On the ridge of the roof on top of the crossing (the intersection of the nave and the transepts) of a church, flèches were typically light, delicate, timber-framed constructions with a metallic sheath of lead or copper. [8] They are often richly decorated with architectural and sculptural embellishments: tracery, crockets, and miniature buttresses serve to adorn the flèche. [8]

The most famous flèche was the Neo-Gothic 19th-century design by Eugène Viollet-le-Duc for the Notre-Dame de Paris, 100 feet (30 meters) tall and richly decorated with sculpture. The original flèche of Notre-Dame was built in the 13th century, and removed in 1786, shortly before the French Revolution. The famous replacement by Viollet-le-Duc with an abundance of sculpture was destroyed in the 2019 Notre-Dame de Paris fire. It will be rebuilt in the same form. 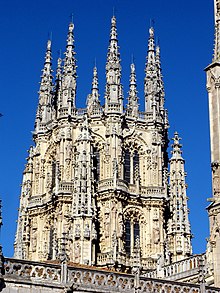 The octagonal tower of Burgos Cathedral (1221–1260), with an array of pinnacles
Main article: Pinnacle

A pinnacle is a miniature spire that was used both as a decorative and functional element. In early Gothic, as at Notre-Dame de Paris, stone pinnacles were placed atop flying buttresses, to give them additional weight and stability, and to counterbalance the outward thrust from the rib vaults of the nave. As an ornament, they were used to break up the horizontal lines, such as parapets and the roofs of towers. In later Gothic, they were sometimes often clustered together into forests of vertical ornament.

Clad spires can take a variety of shapes. These include:

Pyramidal spires, which may be of low profile, rising to a height not much greater than its width, or, more rarely, of high profile.
Rhenish helm: This is a four-sided tower topped with a pyramidal roof. each of the four sides of the roof is rhomboid in form, with the long diagonal running from the apex of roof to one of the corners of the supporting tower; each side of the tower is thus topped with a gable from whose peak a ridge runs to the apex of the roof.
Broach spires: These are octagonal spires sitting on a square tower, with a section of spire rising from each corner of the tower, and bridging the spaces between the corners and four of the sides.
Bell-shaped spires: These spires, sometimes square in plan, occur mostly in Northern, Alpine and Eastern Europe, where they occur alternately with onion-shaped domes.

The spire of Burghley House (1555–1587) is an example of a spire on non-religious building.

In Gothic architecture, where the spire is most commonly used, and particularly in Gothic cathedrals and churches it symbolised the heavenly aspirations of churches' builders, as well as offering a visual spectacle of extreme height. [4] It also suggested, by its similarity to a spear point, the power and strength of religion. [10]