From Wikipedia, the free encyclopedia
Private university in Tokyo, Japan

Sophia University (Japanese: 上智大学, Jōchi Daigaku; Latin: Universitas Sedis Sapientiae) is a private research university in Japan. Sophia is one of the three Sōkeijōchi (早慶上智) private universities, a group of the top three private universities in Japan with the other two being Keio University and Waseda University, [3] [4] according to the Times Higher Education. It is also ranked number 18 in the 2021 Times Japan University Rankings. [5] Founded by the Roman Catholic religious order of the Society of Jesus in 1913, the university has grown from its three original academic departments of Philosophy, German Literature, and Commerce to 9 undergraduate Faculties and 10 Graduate Schools, with over 13,900 students in total at the moment. [6] [7] [8]

Sophia has international students from 77 countries and it has forged agreements with 395 overseas universities in 81 countries to encourage students joining the exchange programs with several other top universities throughout the world.

Sophia is a leading institution in globalisation, foreign languages, and literature in Japan. As a prominent institution for research and higher learning in the fields of the social sciences, humanities, and natural sciences, the university has been selected by the Japanese Ministry of Education to be one of 37 universities to receive funding for its internationalisation efforts through the " Top Global University Project". [9] The university has been ranked as the top third Catholic university in Asia [10]

Before 1957, the university only admitted male students to degree programmes, but the numbers of male and female students are now more or less equal. Sophia's alumni are referred to as "Sophians", among whom include the 79th Prime Minister of Japan, Morihiro Hosokawa, several politicians represented in the Japanese National Diet, professors at various higher education institutions, and even actors and musicians in the Japanese film and music industries.

Origins of the university name

The name of the university is traced to letters of correspondence between two of the three founders of what would become Sophia University, Fr. James Rockliff, SJ and Fr. Hermann Hoffmann, SJ. The Japanese term 上智 ("higher wisdom" or "supreme wisdom", Jōchi) was the equivalent of the Latin word sapientia, which means wisdom. According to Catholic Church tradition, the term sapientia refers to the one of the Church's devotional titles for the Blessed Virgin Mary, the Seat of Wisdom.

When Joseph Eylenbosch, SJ began teaching Greek at the university in April 1924, he thought that the Japanese term jōchi was the equivalent of the Greek term σοφία (sofia). Afterwards, the students had proposed that the school be known as Sophia University.

Fr. Hoffmann, SJ, who was serving as University President at that time, initially opposed the proposal. However, he soon accepted the idea and submitted the proposal to Rome for the approval.

The English language-based, peer-reviewed academic journal Monumenta Nipponica, which was first inaugurated in 1938, identified itself as being published by Sophia University. The use of Sophia as the university name then became firmly established in Japan and overseas. [11]

History of the university

The origins of Sophia University could be traced to 1549 when Saint Francis Xavier, a prominent member and co-founder of the Society of Jesus, arrived in Japan to spread Christianity. In his letters to his fellow Jesuits, he had expressed hopes of establishing a university in Japan. [12] [13]

During the so-called Kirishitan period of Japanese history, the Catholic Church had been responsible for establishing and administering educational institutions in Japan called Collegios and Seminarios, serving as bridges between the East and West. 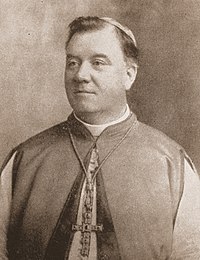 William H. O'Connell had been appointed as a special ambassador of the Vatican to Japan.

The establishment of the university only began to take place more than 400 years from St. Francis Xavier's arrival in Japan. In 1903, three Jesuit priests from Europe came to Japan to continue the missionary work of the Church and to help establish Sophia University. One of the founders, Fr. Joseph Dahlmann, SJ from Germany, who had come to Japan via India, had listened to the requests of Catholics in the country, who expressed their desires to construct a Catholic university to serve as the cultural and spiritual base of the Church's missionary operations in Japan.

Dahlmann heeded the requests and sent a proposal to the then- Bishop of Rome, Pope Pius X, at the Holy See in Rome. In 1905, Dahlmann was granted a private audience with the Pope, who promised to assign the Society of Jesus to create and administer a Catholic university in Japan. In Dahlmann's Latin memoirs regarding the encounter with Pius, he recounted that he spoke as follows: "Habebitis collegium in Japonica, magnam universitatem (in English: "You (plural) will have in Japan a college that is a great university".).

On that same year, the then-Bishop of Portland, Maine in the United States, William H. O'Connell, was appointed by the Pope to serve as a special ambassador of the Vatican to Emperor Meiji in Japan. O'Connell was also tasked to survey the situation in Japan. When he was granted an audience with Emperor Meiji, he had ascertained the education policy directions of the Japanese Ministry of Education, and reported to officials at the Holy See regarding the possible establishment of a Catholic university in Japan.

At the 25th General Congregation of the Society of Jesus in held in Rome in September 1906, Pius X issued a formal written statement to the Jesuits to establish a Catholic university in Japan. Thus, the delegates at the Congregation voted unanimously in favour of the Pope's commands, and the first concrete steps were taken to prepare a university institution in the East. [14]

History of the university after its establishment 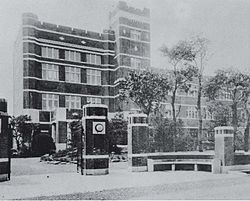 An academic building at Sophia University, a year after its establishment. 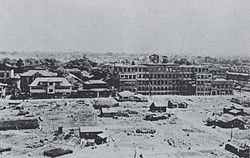 Sophia University was founded by Jesuits in 1913. It opened with departments of German Literature, Philosophy and Commerce, headed by its founder Fr. Hermann Hoffmann, SJ (1864–1937) as its first official president. [15]

In 1932, a small group of Sophia University students refused to salute the war dead at Yasukuni Shrine in the presence of a Japanese military attache, saying it violated their religious beliefs. The military attache was withdrawn from Sophia as a result of this incident, damaging the university's reputation in the eyes of the government of the Japanese Empire. The Archbishop of Tokyo intervened in the standoff by permitting Catholic students to salute the war dead, after which many Sophia students, as well as Hermann Hoffmann himself, participated in rites at Yasukuni. The Congregation for the Evangelization of Peoples later issued the Pluries Instanterque in 1936, which encouraged Catholics to attend Shinto shrines as a patriotic gesture; the Vatican re-issued this document after the war in 1951. [16]

Sophia University continued to grow as it increased the number of academic departments, faculty members and students, in addition to advancing its international focus by establishing an exchange program. Many of its students studied at Georgetown University in the United States as early as 1935. Sophia's junior college was established in 1973, followed by the opening of Sophia Community College in 1976. With the founding of the Faculty of Liberal Arts in 2006, Sophia University presently holds 27 departments in its eight faculties. Its current president is Yoshiaki Terumichi. Toshiaki Koso serves as head of its board of directors. Since 2008, the Global Leadership Program was started for students from four Jesuit universities in East Asia: Ateneo de Manila University in the Philippines, Fu Jen Catholic University in Taiwan, Sogang University in South Korea, and Sophia University in Japan. [17] In 2016 the university reached out to the four Jesuit junior-senior high schools in Japan, joining them in the Sophia College Corporation to help them pass on the Jesuit charism to their lay faculty through workshops and other assistance. These schools are Sophia-Fukuoka, Eiko Gakuen, Hiroshima Gakuin, and Rokko School. [18] 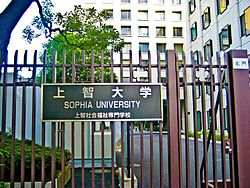 Sophia's main campus at Yotsuya is urban, consisting of roughly 25 large, modern buildings in the center of Tokyo. The majority of Sophia's 10,000 undergraduate students spend nearly all their time here. The faculties of Humanities, Law, Foreign Studies, Economics, Liberal Arts, and Science and Technology have their home here, as do the main library, cafeteria, gymnasium, chapel, bookstore, and offices. In April 2006, the Faculty of Comparative Culture, which had been located at the smaller Ichigaya campus, moved to the main Yotsuya campus and changed its name to the Faculty of Liberal Arts. [19] Nearly all of Sophia's foreign exchange and international students study at the FLA.

The Tokyo office of the Council on International Educational Exchange, the student exchange organisation, which oversees roughly half of the international students, is also based on the main Yotsuya Campus. The Shakujii ( Tokyo) campus houses the Faculty of Theology. The Hadano campus in Kanagawa Prefecture is home to the Sophia Junior College, as well as a number of seminar halls and athletics complexes. [20] 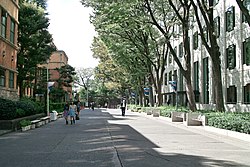 Photograph of the Sophia University Yotsuya Campus in Chiyoda, Tokyo.

In addition to most courses of study taught almost entirely in Japanese, Sophia has a variety of academic programmes and courses taught in English. The Faculty of Liberal Arts (FLA), the Green Science and Engineering courses in the Faculty of Science and Technology (FST), and the Sophia Program for Sustainable Futures (SPSF). [26]

Courses taught in the Faculty of Liberal Arts

English courses taught in the Faculty of Science and Technology

Courses taught in the Sophia Program for Sustainable Futures

Sophia University is a comprehensive research university with 9 undergraduate faculties with 10 graduate schools located on a single campus in Chiyoda, Tokyo. Leading higher education institutions in Japan toward globalisation and academic research, the university provides a strong international network of scholarship, attracting researchers and students from overseas to study in Japan.

Simultaneously, Sophia's Centre for Research Promotion and Support provides additional support to general research activities and strengthens the a three-way collaboration initiative among industries, government, and academia. The Intellectual Property Rights Committee, established in 2005, ensures smooth collaborative support among the three individual groups and examines the inventions and intellectual properties of the researchers affiliated with Sophia University. [27]

To assist with academic research and learning, Sophia currently has a total of 3 libraries and an affiliated library, possessing in total more than 11.5 million books and 12,570 journal titles. [28] [29]

Sophia University has student housing options and dormitories scattered throughout Tokyo. These university dormitories provide facilities and spaces for students to undertake study and research activities. Events and various programmes are also organised by students and housing staff for the benefit of the housing community all year round. [44]

Sophia University has a group of designated and recommended dormitories, which are owned and operated by various private housing companies. [45] 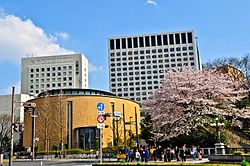 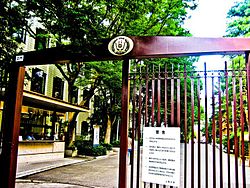 There are several rankings below related to Sophia University.

According to the Times Higher Education 2021 Japan University Rankings, Sophia University is ranked 18th in the nation. [54] Sophia is the fourth largest liberal arts university in the country.

Alumni of Sophia have good employment prospects in Japanese industries. According to the Weekly Economist's 2010 rankings and the PRESIDENT's article on 2006/10/16, graduates from Sophia have the eighth best employment rate in 400 major companies, and the average graduate salary is the sixth best in Japan. [57] [58]

Sophia University has student and academic exchange agreements with 387 overseas partner universities in 81 countries and regions as of June 2021. [63]