From Wikipedia, the free encyclopedia
"SEGS" redirects here. For the airport with that ICAO code, see Seymour Airport.

Solar Energy Generating Systems (SEGS) is a concentrated solar power plant in California, United States. With the combined capacity from three separate locations at 354 megawatt (MW), it was once the world's second largest solar thermal energy generating facility, until the commissioning of the even larger Ivanpah facility in 2014. It consisted of nine solar power plants in California's Mojave Desert, where insolation is among the best available in the United States.

A tenth plant (SEGS X, 80 MW) had been in construction and SEGS XI and SEGS XII had been planned by Luz Industries, but the developer filed for bankruptcy in 1992, because it was unable to secure construction financing. [4] The site of SEGS X was later licensed for a solar photovoltaic farm, Lockhart Solar PV II. [5]

Most of the thermal facilities were retired by 2021, [6] and photovoltaics were built on the same sites.

Before retirement and replacement of SEGS I-VII with solar photovoltaics, the plants had a 354 MW net (394 MW gross) installed capacity. The nameplate capacity, which operating continuously, would dеliver the samе net power output, coming only from the solar source was around 75 MWe —, representing a 21% capacity factor. In addition, the turbines could be utilized at night by burning natural gas.

NextEra claimed in 2009 that the solar plants could power 232,500 homеs (during the day, at peak power) and displace 3,800 tons of pollution pеr year that would have been produced if the electricity had been providеd by fossil fuels, such as oil. [7]

As an example of cost, in 2002, one of the 30 MW Kramer Junction sites required $90 million to construct, and its operation and maintenance cost was about $3 million per year (4.6 cents per kilowatt hour). [8] With a considered lifetime of 20 years, the operation, maintenance and investments interest and depreciation triples the price, to approximately 14 cents per kilowatt hour.[ citation needed] 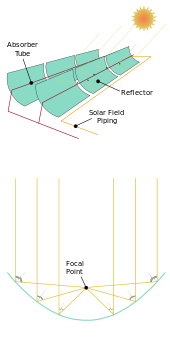 Sketch of a Parabolic Trough Collector

The installation uses parabolic trough, solar thermal technology along with natural gas to generate electricity. About 90% of the electricity is produced by the sunlight.[ citation needed] Natural gas is only used when the solar power is insufficient to meet the demand from Southern California Edison, the distributor of power in southern California. [9]

The parabolic mirrors are shaped like quarter-pipes. The sun shines onto the panels made of glass, which are 94% reflective, unlike a typical mirror, which is only 70% reflective. The mirrors automatically track the sun throughout the day. The greatest source of mirror breakage is wind, with 3,000 mirrors typically replaced each year. Operators can turn the mirrors to protect them during intense wind storms. An automated washing mechanism is used to periodically clean the parabolic reflective panels. The term "field area" is assessed as the actual collector area.

The sunlight bounces off the mirrors and is directed to a central tube filled with synthetic oil, which heats to over 400 °C (750 °F). The reflected light focused at the central tube is 71 to 80 times more intense than the ordinary sunlight. The synthetic oil transfers its heat to water, which boils and drives the Rankine cycle steam turbine, [10] thereby generating electricity. Synthetic oil is used to carry the heat (instead of water) to keep the pressure within manageable parameters.

The SEGS power plants were built by Luz Industries, [10] [11] and commissioned between December 20, 1984 and October 1, 1990. [12] After Luz Industries' bankruptcy in 1991 plants were sold to various investor groups as individual projects, and expansion including three more plants was halted. [4]

SEGS VIII and SEGS IX, located at 35°01′55″N 117°20′50″W﻿ / ﻿35.031815°N 117.347270°W﻿ / 35.031815; -117.347270﻿ (SEGS VIII and IX), until Ivanpah Solar Power Facility commissioning in 2014, were the largest solar thermal power plants individually and collectively in the world. [27] They were the last, the largest, and the most advanced of the nine plants at SEGS, designed to take advantage of the economies of scale. Construction of the tenth plant in the same locality was halted because of the bankruptcy of Luz Industries. Construction of the approved eleventh and twelfth plants never started. Each of the three planned plants had 80 MW of installed capacity. [28] Abengoa Solar recently constructed the 280MW Mojave Solar Project (MSP) adjacent to the SEGS VIII and SEGS IX plants. [29] The MSP also uses concentrating solar thermal trough technology.

The reflectors at Kramer Junction site facing the western sky to focus the late afternoon sunlight at the absorber tubes partially seen in the picture as bright white spots.

In February 1999, a 900,000-US-gallon (3,400 m3) Mineral Oil storage tank exploded at the SEGS I (Daggett) solar power plant, sending flames and smoke into the sky. Authorities were trying to keep flames away from two adjacent containers that held sulfuric acid and sodium hydroxide. The immediate area of 0.5 square miles (1.3 km2) was evacuated. [33]