Slate is an online magazine that covers current affairs, politics, and culture in the United States. It was created in 1996 by former New Republic editor Michael Kinsley, initially under the ownership of Microsoft as part of MSN. In 2004, it was purchased by The Washington Post Company (later renamed the Graham Holdings Company), and since 2008 has been managed by The Slate Group, an online publishing entity created by Graham Holdings. Slate is based in New York City, with an additional office in Washington, D.C. [1]

Slate, which is updated throughout the day, covers politics, arts and culture, sports, and news. According to its former editor-in-chief Julia Turner, the magazine is "not fundamentally a breaking news source", but rather aimed at helping readers to "analyze and understand and interpret the world" with witty and entertaining writing. [2] As of mid-2015, it publishes about 1,500 stories per month. [3]

A French version, slate.fr, was launched in February 2009 by a group of four journalists, including Jean-Marie Colombani, Eric Leser, and economist Jacques Attali. Among them, the founders hold 50 percent in the publishing company, while The Slate Group holds 15 percent. [4] [5] In 2011, slate.fr started a separate site covering African news, Slate Afrique, with a Paris-based editorial staff. [6]

As of 2021, [update] the magazine is both ad-supported and has a membership model with a metered paywall. It is known, and sometimes criticized, for having adopted contrarian views, giving rise to the term "Slate Pitches". [7] [8] [9] It has a generally liberal editorial stance. [10] [11] [12]

Slate features regular and semi-regular columns such as Explainer, Moneybox, Spectator, Transport, and Dear Prudence. Many of the articles are short (less than 2,000 words) and argument-driven. Around 2010, the magazine also began running long-form journalism. Many of the longer stories are an outgrowth of the "Fresca Fellowships", so-called because former editor Plotz liked the soft drink Fresca. "The idea is that every writer and editor on staff has to spend a month or six weeks a year not doing their regular job, but instead working on a long, ambitious project of some sort," Plotz said in an interview. [13]

Slate introduced a paywall-based business model in 1998 that attracted up 20,000 subscribers but was later abandoned. [14] A similar subscription model was implemented in April 2001 by Slate's independently owned competitor, Salon.com. 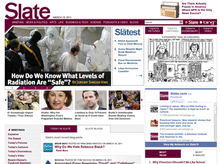 On its 10th anniversary, Slate unveiled a redesigned website. It introduced Slate V in 2007, [15] an online video magazine with content that relates to or expands upon their written articles. In 2013, the magazine was redesigned under the guidance of design director Vivian Selbo.

Slate was nominated for four digital National Magazine Awards in 2011 and won the NMA for General Excellence. In the same year, the magazine laid off several high-profile journalists, including co-founder Jack Shafer and Timothy Noah (author of the Chatterbox column). [16] At the time, it had around 40 full-time editorial staff. [16] The following year, a dedicated ad sales team was created. [17]

The next year, Slate became profitable after preceding years had seen layoffs and falling ad revenues. [2]

In 2014, Slate introduced a paywall system called "Slate Plus", offering ad-free podcasts and bonus materials. A year later, it had attracted 9,000 subscribers generating about $500,000 in annual revenue. [14]

Slate moved all content behind a metered paywall for international readers in June 2015, explaining "our U.S.-based sales team sells primarily to domestic advertisers, many of whom only want to reach a domestic audience. ...The end result is that, outside the United States, we are not covering our costs." [19] At the same time, it was stated that there were no plans for a domestic paywall. [3]

Since 2006, [8] Slate has been known for publishing contrarian pieces arguing against commonly held views about a subject, giving rise to the #slatepitches Twitter hashtag in 2009. [9] The Columbia Journalism Review has defined Slate pitches as "an idea that sounds wrong or counterintuitive proposed as though it were the tightest logic ever," and in explaining its success wrote "Readers want to click on Slate Pitches because they want to know what a writer could possibly say that would support their logic". [20]

In 2014, Slate's then editor-in-chief Julia Turner acknowledged a reputation for counterintuitive arguments forms part of Slate's "distinctive" brand, but argued that the hashtag misrepresents the site's journalism. "We are not looking to argue that up is down and black is white for the sake of being contrarian against all logic or intellectual rigor. But journalism is more interesting when it surprises you either with the conclusions that it reaches or the ways that it reaches them." [2]

In a 2019 article for the site, Slate contributor Daniel Engber reflected on the changes that had occurred on the site since he started writing for it 15 years previously. He suggested that its original worldview, influenced by its founder Kinsley and described by Engber as "feisty, surprising, debate-club centrist-by-default" and "liberal contrarianism", had shifted towards "a more reliable, left-wing slant", whilst still giving space for heterodox opinions, albeit "tempered by other, graver duties". He argued that this was necessary within the context of a "Manichean age of flagrant cruelty and corruption", although he also acknowledged that it could be "a troubling limitation". [21]

According to NiemanLab, Slate has been involved in podcasts "almost from the very beginning" of the medium. [22] Its first podcast offering, released on July 15, 2005, [23] featured selected stories from the site read by Andy Bowers, who had joined Slate after leaving NPR in 2003. [22] [24] By June 2012, Slate had expanded their lineup to 19 podcasts, with Political Gabfest and Culture Gabfest being the most popular. [22] This count had shrunk to 14 by February 2015, with all receiving six million downloads per month. [24] The podcasts are "a profitable part of [Slate's] business"; the magazine charges more for advertising in its podcasts than in any of its other content. [22]

Slate podcasts have gotten longer over the years. The original Gabfest ran 15 minutes; by 2012, most ran about 45 minutes. [22]

Jacob Weisberg was Slate's editor from 2002 until 2008. Weisberg's deputy editor David Plotz then became editor until July 2014, [25] when he was replaced by Julia Turner.