From Wikipedia, the free encyclopedia
For other uses, see Skyline (disambiguation).
"City skyline" redirects here. For the video game, see Cities: Skylines.
Outline or shape viewed near the horizon

Skyline of Lower Manhattan. The term "Skyline" was first used for New York City in 1896.

A skyline is the outline or shape viewed near the horizon. It can be created by a city’s overall structure, or by human intervention in a rural setting, or in nature that is formed where the sky meets buildings or the land.

City skylines serve as a pseudo- fingerprint as no two skylines are alike. For this reason, news and sports programs, television shows, and movies often display the skyline of a city to set a location. The term The Sky Line of New York City was first introduced in 1896, when it was the title of a color lithograph by Charles Graham for the color supplement of the New York Journal. [1] Paul D. Spreiregen, FAIA, has called a [city] skyline "a physical representation [of a city's] facts of life ... a potential work of art ... its collective vista." [2]

High-rise buildings, including skyscrapers, are the fundamental feature of urban skylines. [3] [4] Both contours and cladding (brick or glass) make an impact on the overall appearance of a skyline. 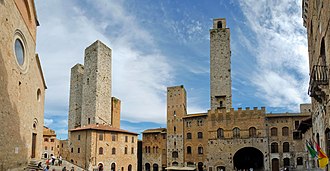 San Gimignano, in Tuscany, Italy, has been described as having an "unforgettable skyline" with its competitively built towers. [5] 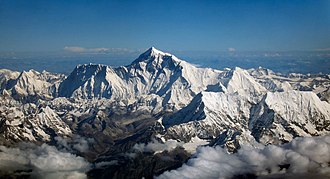 Some remote locations have striking skylines, created either by nature or by sparse human settlement in an environment not conducive to housing significant populations.

Norman Foster served as architect for the Gherkin in London and the Hearst Tower in Midtown Manhattan, and these buildings have to added to their cities' skylines.

Skylines are often used as backgrounds and establishing shots in film, television programs, news websites, and in other forms of media.

Several services rank skylines based on their own subjective criteria. Emporis is one such service, which uses height and other data to give point values to buildings and add them together for skylines. The three cities it ranks highest are Hong Kong, Seoul and Shenzhen. [6]