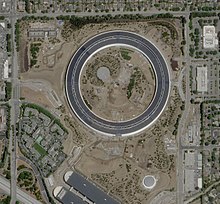 SkySat image of Apple Park taken in May 2017. 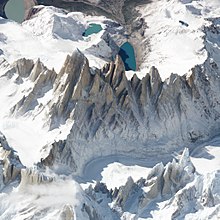 The resolution of the SkySat satellite imagery and videos is high enough to observe objects that impact the global economy such as terrain, cars and shipping containers. The satellites can capture video clips lasting up to 90 seconds at 30 frames per second. [5] The high-definition satellite video from SkySat satellites "could help us understand our world better by analyzing movement of goods and people, providing visual data about supply chains, shipping, industrial plant activity, and even humanitarian relief efforts". [5]

The constellation's goal is to be able to provide high-resolution satellite imagery of any place on Earth multiple times a day. [6] When Skybox originally developed the satellites, they planned to "change the nature" of the satellite industry by building satellites with "off-the-shelf" electronics that cost under US$50 million. [7]

By April 2012, Skybox Imaging had raised a total of $91 million (equivalent to about $107M in 2021) of private capital from Khosla Ventures, Bessemer Venture Partners, Canaan Partners and Norwest Venture Partners to develop the SkySat constellation. [6]

On 21 November 2013, the first satellite, SkySat-1, was launched on a Dnepr rocket from Dombarovsky Air Base, Russia. [8] Less than a month later, on 11 December 2013, the first images captured by the SkySat-1 satellite, of Perth, Abu Dhabi, and the coast of Somalia, were released. [9] The second satellite, SkySat-2, launched on a Soyuz-2/Fregat rocket from Baikonur, Kazakhstan on 8 July 2014. [10] The company plans to eventually launch a fleet of 24 satellites. [11] and released its first images within 48 hours of launch. [12]

On 10 June 2014, Skybox Imaging announced that it had entered into an agreement to be acquired by Google for $500 million (equivalent to about $572M in 2021). [17] [18] The acquisition was completed on 1 August 2014. [18] [4] Skybox Imaging changed its name to "Terra Bella" on 8 March 2016, to indicate its focus on image analytics. [19] The new name was partially based on the Terra Bella Avenue in Mountain View, California, where the company's headquarters are located. [20] Terra bella is Italian for "beautiful Earth". The name change was also partially due to perceived trademark infringement that came to light in the Google acquisition.

Four more SkySat units were launched on 16 September 2016, by the Vega rocket's seventh flight from Kourou. [21]

In 2017, Google sold Terra Bella and its SkySat satellite constellation to Planet Labs, adding to their existing fleet of around 50 satellites, [22] for an undisclosed price and entered into a multi-year agreement to purchase SkySat imaging data. [23] Planet Labs launched six more SkySat satellites, along with four Dove CubeSats, on a Minotaur-C rocket from Vandenberg Air Force Base on 31 October 2017. [24] [25] An additional two SkySat satellites and three Dove CubeSats were launched on a Falcon 9 rocket from Vandenberg on 3 December 2018. [26] [27]

The first two prototype satellites (SkySat-1 and 2) were produced by Skybox Imaging in-house. They did not have a propulsion system. [30]

The other 13 satellites are manufactured by SSL, [31] the optical payloads are built by L3 Technologies, [32] [25] and the satellite thrusters are provided by ECAPS. [33] The 13 SkySat-C satellites are slightly larger and heavier (with mass about 120 kg or 264 lbs) than the prototypes. They have a planned operational life of 6 years. [34]

Three of Planet's commercial SkySat (SkySat-16, -17 and -18) Earth-imaging spacecraft launched on top of a stack of 58 SpaceX Starlink-8 satellites on 13 June 2020 aboard a Falcon 9 rocket, [35] and three more (SkySat-19, -20 and -21) hitched a ride on another SpaceX mission on August 18, 2020. Built by Maxar Technologies, each of the SkySat satellites weighs around 110 kilograms (240 lb) at launch. The SkySats are about the size of a mini-refrigerator, and their optical instruments produce images of Earth with a resolution of 50 cm, according to Planet. [36]

There have been 21 satellites launched.