Phillips worked as a session drummer for Jeff Beck, Gary Moore, Michael Schenker, Bernie Marsden, Jon Lord, Nik Kershaw, Mike Oldfield, Judas Priest, Mike Rutherford, Tears for Fears, 10cc and The Who. He was the drummer for The Who during the band's American reunion tour in 1989. He became the drummer for the band Toto in 1992 after the death of Jeff Porcaro.

Phillips began to play professionally at the age of twelve in a Dixieland band led by his father, Sid Phillips for four years. [1] After his father's death, he started playing pop and rock and found work in a production of the musical Jesus Christ Superstar. [1] He worked as a session musician for cast members, and this led to other session work. [1] Beginning in the 1970s, he worked with Jeff Beck, Gil Evans, Stanley Clarke, Peter Gabriel, Pete Townshend, and Frank Zappa. [1]

Phillips was the drummer in the Phil Manzanera and Brian Eno supergroup 801 on their 1976 album 801 Live. He replaced Judas Priest drummer Alan Moore to record on the band's Sin After Sin album (1977), and on that album, Phillips introduced the combination of the double bass drumming that would come to define heavy metal in later years, particularly the thrash metal sub-genre which emerged in the 1980s. [2] The track " Dissident Aggressor" was an early example of the tempo and aggression which would soon become synonymous with the New Wave of British Heavy Metal. [2] Author Andrew L. Cope has described Sin After Sin as a key album in the development of heavy metal technique, in particular for its use of double kick drumming. [3] That same year, Phillips played on Evita. Around 1978, British guitarist Gary Boyle made an album called "The Dancer" featuring Simon Phillips.

Phillips played & co-wrote songs on Jeff Beck's 1980 jazz-rock fusion album There & Back, featuring his double-kick prowess on the song "Space Boogie" which he also co-wrote. Another track "The Pump" was co-written by Phillips & appeared on the soundtrack to the 1983 film Risky Business.

In 1981, he formed Ph.D. with Jim Diamond and Tony Hymas. The new wave outfit released two albums and five singles, including " Little Suzi's on the Up" and " I Won't Let You Down", before splitting up in 1983.

He was the drummer for The Who on their 1989 American reunion tour and appeared on solo recordings by band members Roger Daltrey and Pete Townshend.

Also in 1989, he recorded his debut album with the band Protocol. [1] Wanting to make bigger changes in his music career, Phillips decided to move to Los Angeles in the 1990s.

In 1992, Phillips had recently completed the recording of an album in England when he was invited by Toto to fill in for Jeff Porcaro after the latter died following the completion of the recording of Kingdom of Desire. [4] He became the band's only choice to replace Jeff for two reasons: Jeff himself viewed Phillips as one of his most favorite drummers (the others being Gregg Bissonnette and Vinnie Colaiuta) and that he toured with Steve Lukather and Carlos Santana on their solo tours. Phillips decided to settle permanently in Los Angeles on that matter and began rehearsals with the band. After the Kingdom of Desire tour, Phillips officially joined Toto.

As the band began its 1995 Tambu tour, Phillips suffered from back problems and was unable to play on the first leg of the said tour; the band turned to Gregg Bissonette to substitute for him. When Phillips fell ill prior to the 2004 Night of the Proms concert, Bissonette was unavailable to take over his drumming duties, causing the band to invite Ricky Lawson instead.

Phillips' last show with Toto was in 2013. He left the following year to focus on his solo career and was replaced by Keith Carlock.

Five years later he led a band that performed at the North Sea Jazz Festival. [4] In 2000 he recorded a jazz album, Vantage Point, with trumpeter Walt Fowler, saxophonist Brandon Fields, and pianist Jeff Babko. [1] He has co-produced and engineered albums by Mike Oldfield, Derek Sherinian, and Toto. [4] After leaving Toto, he became a member of a trio with Hiromi Uehara and bassist Anthony Jackson. [5] Phillips has also worked with Big Country, Jack Bruce, David Gilmour, Big Jim Sullivan, and Whitesnake. [6]

In 2009, Phillips joined with keyboardist Philippe Saisse and bassist Pino Palladino in forming an instrumental jazz/ funk rock trio: Phillips Saisse Palladino, PSP, which toured in Europe in 2009 and 2010. Phillips also performed on Joe Satriani's album Super Colossal, appearing on multiple tracks. Phillips appears in Alan Parsons' Art & Science of Sound Recording educational video series, as well as the program's single "All Our Yesterdays". He played in the Michael Schenker Group album In the Midst of Beauty and took part to the band's 30th Anniversary world tour in 2010. Phillips is featured on Hiromi Uehara's 2011 album, Voice. He also toured with Hiromi and bassist Anthony Jackson as part of the Hiromi Trio Project. [7] 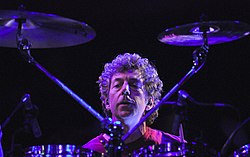 Phillips playing with PSP in Rome, 2009

In 2019 Phillips was featured on the album Origin of Species. In addition to playing drums and keyboards, he engineered, mixed, and helped produce. [8]