From Wikipedia, the free encyclopedia
Network of toll motorways in the Greater Tokyo area 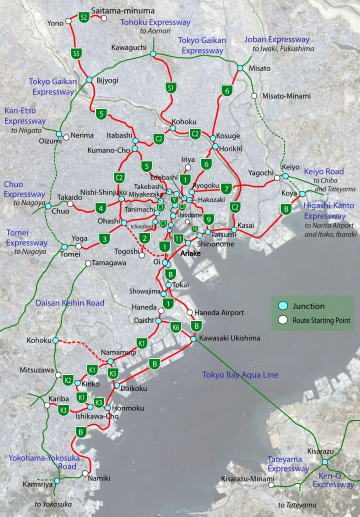 Most routes are grade-separated (elevated roads or tunnels) and central routes have many sharp curves and multi-lane merges that require caution to drive safely. The speed limit is 60 km/h on most routes, but 80 km/h on the Bayshore Route, and 50 km/h on the Inner Circular Route.

All trips on the expressway require a toll be paid. As of 2014, the cash toll for a standard-size car is ¥1300 regardless of distance traveled. Vehicles using the ETC toll-collection system pay a distance-based toll ranging from ¥300 to ¥1300 for ordinary vehicles (see toll price) – in some cases substantially less than the previous fixed-rate toll. Lower cash rates exist for certain radial routes (where there are only a few kilometers of expressway remaining) and ETC users have various time-of-day discounts. For large vehicles, the toll is doubled.

There are 24 routes currently in operation:

The Shuto Expressway as it crosses Rainbow Bridge 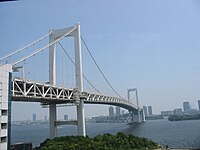 Rainbow Bridge on the Daiba Route

Japan allows a person aged at least 20 who has held a motorcycle driver's license for at least three years to carry a pillion passenger on expressways, however, the Shuto Expressway in the central parts of Tokyo prohibit carrying pillion passengers due to poor road geometry. [1] The ban does not apply if the motorcycle is equipped with a sidecar. The segments with a pillion ban include the important C1 Inner Circular route and adjoining central Tokyo routes.

With the opening of the C2 Yamate Tunnel, motorcycles with a pillion passengers can finally pass through the Shuto Expressway from the national expressways such as Tōmei Expressway to other expressways using the C2 route, although this can be a much longer drive in some cases. [2]

There are 21 parking areas scattered throughout the Shuto Expressway system. In general these are much smaller than the service areas available every 30 kilometers (19 miles) or so on inter-city expressways. In some cases there are no more than toilets, a few vending machines, and a handful of parking spaces. None have fuel – drivers must exit the system (and pay the toll again on re-entry) to use a service station.

Like other expressways in Japan including the Tōmei Expressway, the Shuto line has become a common street racing road. One of the lines, the Bayshore Route (also known as the Wangan route), received worldwide notoriety during the 1990s as the home course for the Mid Night Club, one of the most notorious street racing clubs, who were known for their 300 km/h, sometimes 320 km/h exploits.[ citation needed]

Due to this infamy, the Wangan is the setting for several entertainment properties, such as the manga and arcade game Wangan Midnight, video games Shutokou Battle and Gran Turismo 5, 6, Sport and 7 (as the street circuit) and the movie series Shuto Kousoku Trial. Numerous car enthusiast magazines and DVDs, like Best Motoring, also highlight races and activities on the Wangan. [3] [4] [5]