Shinagawa (品川区, Shinagawa-ku) is a special ward in Tokyo, Japan. The Ward refers to itself as Shinagawa City in English. The Ward is home to ten embassies.

Shinagawa is also commonly used to refer to the business district around Shinagawa Station, which is not in Shinagawa Ward. This Shinagawa is in the Takanawa and Konan neighborhoods of Minato Ward, directly north of Kita-Shinagawa.

Shinagawa Ward includes natural uplands and lowlands, as well as reclaimed land. The uplands are the eastern end of the Musashino Terrace. They include Shiba-Shirokanedai north of the Meguro River, Megurodai between the Meguro and Tachiai Rivers, and Ebaradai south of the Tachiai River.

The Ward lies on Tokyo Bay. Its neighbors on land are all special wards of Tokyo: Kōtō to the east, Minato to the north, Meguro to the west, and Ōta to the south.

Shinagawa Ward consists of five areas, each consisting of multiple districts and neighborhoods:

Shinagawa-juku in the 1830s, as depicted by Hiroshige

Most of Tokyo east of the Imperial Palace is on reclaimed land. A large proportion of the reclamation took place during the Edo period, when Shinagawa-juku was the first shukuba (post town) in the " 53 Stations of the Tōkaidō" that a traveler would reach after setting out from Nihonbashi to Kyoto on the Tōkaidō. The Tokugawa shogunate maintained the Suzugamori execution grounds in Shinagawa.

Following the Meiji Restoration and the abolition of the han system, Shinagawa Prefecture was instituted in 1869. The prefectural administration was to be set up in the Ebara District, but in 1871 Shinagawa Prefecture was integrated into Tokyo Prefecture. In 1932, during the reorganisation of the municipal boundaries of Tokyo City following the 1923 Great Kantō earthquake, a smaller version of Shinagawa Ward was created. On March 15, 1947, this was merged with the neighboring Ebara Ward to create the present Shinagawa Ward.

The Ward's historic post-town function is retained today with several large hotels near the train station offering 6,000 rooms, the largest concentration in Tokyo.

Shinagawa is run by an assembly of 40 elected members. 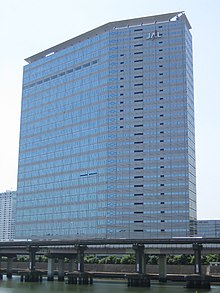 On 8 July 2022, Nikon announced they have begun construction on a new headquarters adjacent to their Oi Plan. [41] The Nikon HQ is supposed to be completed in 2024 and its address is: 5480-1, Nishioi 1-chome, Shinagawa-ku, Tokyo 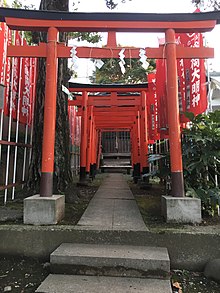 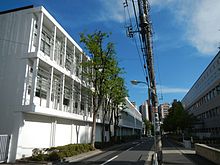 Exterior of Shinagawa Station in Minato

Shinagawa Station is in fact located in neighboring Minato but also serves the northern part of Shinagawa, and is a stop on the high-speed Tōkaidō Shinkansen line.

Shinagawa is also home to the main motor vehicle registration facility for central Tokyo (located east of Samezu Station). As a result, many license plates in Tokyo are labeled with the name "Shinagawa."

Shinagawa has sister-city relationships with Auckland in New Zealand, Geneva in Switzerland, and Portland, Maine, in the United States. [77]

Shinagawa has an educational exchange city (教育交流都市) relationship with Harbin in China, [79] and has concluded "hometown exchange agreements" (ふるさと交流協定) with Hayakawa in Yamanashi Prefecture and Yamakita in Kanagawa Prefecture. [80]

Wikivoyage has a travel guide for Shinagawa.
Retrieved from " https://en.wikipedia.org/?title=Shinagawa&oldid=1134531369"
Categories:
Hidden categories: