From Wikipedia, the free encyclopedia
Scramble crossing in Tokyo, Japan

Shibuya Scramble Crossing (渋谷スクランブル交差点, Shibuya sukuranburu kōsaten) or commonly known as Shibuya Crossing is a popular scramble crossing in Shibuya, Tokyo, Japan. [1] It is located in front of the Shibuya Station Hachikō exit and stops vehicles in all directions to allow pedestrians to inundate the entire intersection. The statue of Hachikō, between the station and the intersection, is a common meeting place and almost always crowded.

Three large TV screens mounted on nearby buildings overlook the crossing, as well as many advertising signs. The Starbucks store overlooking the crossing is also one of the busiest in the world. Its heavy traffic and inundation of advertising have led to it being compared to the Times Square intersection in New York City and Piccadilly Circus intersection in London. Shibuya Crossing is the world’s busiest pedestrian crossing, with as many as 3,000 people crossing at a time. [2] [3] [4] Tokyo-based architecture professor Julian Worrall has said Shibuya Crossing is "a great example of what Tokyo does best when it's not trying." [5]

Shibuya Crossing is often featured in movies and television shows which take place in Tokyo, such as Lost in Translation, [6] The Fast and the Furious: Tokyo Drift, and Resident Evil: Afterlife, as well as on domestic and international news broadcasts. The iconic video screen featured in the above movies, in particular Lost in Translation with its 'walking dinosaur' scene, was taken down for a period of time and replaced with static advertising, although it resumed operation in July 2013. [7]

Contemporary British painter Carl Randall (who spent 10 years living in Tokyo as an artist) depicted the area in his large artwork 'Shibuya', exhibited at the National Portrait Gallery in London 2013. [8] [9] [10] Scramble Crossing is a major location in the video game The World Ends With You and its sequel, which is set entirely in the neighbourhood of Shibuya.[ citation needed] 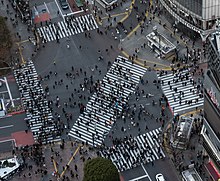 Aerial photo of the crossing

This intersection is frequently called "the busiest pedestrian intersection in the world" [2] [3] and there is almost no loss of foot traffic at midnight or early morning. [11] Road traffic jams rarely occur here even during rush hours. [3]

Since the late 2010s it has become a popular place for young people to gather at Halloween, some in cosplay costumes. Increasingly large and chaotic crowds led in 2019 to Shibuya Ward adopting an ordinance banning alcohol consumption in the area at the end of October. [18]