From Wikipedia, the free encyclopedia
(Redirected from Serpentine group)
Family of hydrous ferromagnesian minerals
For other uses, see Serpentine (disambiguation). 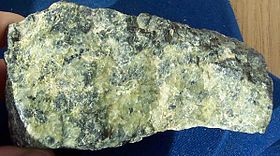 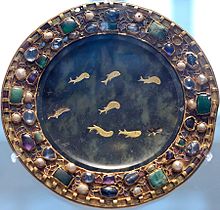 Dish of serpentine with inlaid gold fish, 1st century BC or AD, with 9th century mounts

Necklace and earring set made from semiprecious stones. The spherical green beads are Russian serpentine. Also used are jasper (red) and fluorite (blue).

The serpentine subgroup (part of the kaolinite-serpentine group) [1] are greenish, brownish, or spotted minerals commonly found in serpentinite rocks. They are used as a source of magnesium and asbestos, and as a decorative stone. [2] The name is thought to come from the greenish color being that of a serpent. [3]

The serpentine subgroup are a set of common rock-forming hydrous magnesium iron phyllosilicate (( Mg, Fe)
3 Si
2 O
5( OH)
4) minerals, resulting from the metamorphism of the minerals that are contained in ultramafic rocks. [4] They may contain minor amounts of other elements including chromium, manganese, cobalt or nickel. In mineralogy and gemology, serpentine may refer to any of 20 varieties belonging to the serpentine subgroup. Owing to admixture, these varieties are not always easy to individualize, and distinctions are not usually made. There are three important mineral polymorphs of serpentine: antigorite, chrysotile and lizardite.

Many types of serpentine have been used for jewellery and hardstone carving, sometimes under the name 'false jade' or 'Teton jade'. [6] [7]

Their olive green colour and smooth or scaly appearance is the basis of the name from the Latin serpentinus, meaning "serpent rock," according to Best (2003). They have their origins in metamorphic alterations of peridotite and pyroxene. Serpentines may also pseudomorphously replace other magnesium silicates. Alterations may be incomplete, causing physical properties of serpentines to vary widely. Where they form a significant part of the land surface, the soil is unusually high in clay.

Antigorite is the polymorph of serpentine that most commonly forms during metamorphism of wet ultramafic rocks and is stable at the highest temperatures—to over 600 °C (1,112 °F) at depths of 60 km (37 mi) or so. In contrast, lizardite and chrysotile typically form near the Earth's surface and break down at relatively low temperatures, probably well below 400 °C (752 °F). It has been suggested that chrysotile is never stable relative to either of the other two serpentine polymorphs.

Samples of the oceanic crust and uppermost mantle from ocean basins document that ultramafic rocks there commonly contain abundant serpentine. Antigorite contains water in its structure, about 13 percent by weight. Hence, antigorite may play an important role in the transport of water into the earth in subduction zones and in the subsequent release of water to create magmas in island arcs, and some of the water may be carried to yet greater depths.

Soils derived from serpentine are toxic to many plants, because of high levels of nickel, chromium, and cobalt; growth of many plants is also inhibited by low levels of potassium and phosphorus and a low ratio of calcium/ magnesium. The flora is generally very distinctive, with specialised, slow-growing species. Areas of serpentine-derived soil will show as strips of shrubland and open, scattered small trees (often conifers) within otherwise forested areas; these areas are called serpentine barrens.

Most serpentines are opaque to translucent, light ( specific gravity between 2.2 and 2.9), soft ( hardness 2.5–4), infusible and susceptible to acids. All are microcrystalline and massive in habit, never being found as single crystals. Lustre may be vitreous, greasy or silky. Colours range from white to grey, yellow to green, and brown to black, and are often splotchy or veined. Many are intergrown with other minerals, such as calcite and dolomite. Occurrence is worldwide; New Caledonia, Canada ( Quebec), US (northern California, Rhode Island, Connecticut, Massachusetts, Maryland and southern Pennsylvania), [8] Afghanistan, Britain (the Lizard peninsula in Cornwall), Ireland, Greece ( Thessaly), China, Russia ( Ural Mountains), France, Korea, Austria ( Styria and Carinthia), India ( Assam, and Manipur), Myanmar ( Burma), New Zealand, Norway and Italy are notable localities.

Serpentines find use in industry for a number of purposes, such as railway ballasts, building materials, and the asbestiform types find use as thermal and electrical insulation (chrysotile asbestos). The asbestos content can be released to the air when serpentine is excavated and if it is used as a road surface, forming a long-term health hazard by breathing. Asbestos from serpentine can also appear at low levels in water supplies through normal weathering processes, but there is as yet no identified health hazard associated with use or ingestion. In its natural state, some forms of serpentine react with carbon dioxide and re-release oxygen into the atmosphere.

The more attractive and durable varieties (all of antigorite) are termed "noble" or "precious" serpentine and are used extensively as gems and in ornamental carvings. The town of Bhera in the historic Punjab province of the Indian subcontinent was known for centuries for finishing a relatively pure form of green serpentine obtained from quarries in Afghanistan into lapidary work, cups, ornamental sword hilts, and dagger handles. [7] This high-grade serpentine ore was known as sang-i-yashm in Persian, or 'false jade' in English, and was used for generations by Indian craftsmen for lapidary work. [7] [9] It is easily carved, taking a good polish, and is said to have a pleasingly greasy feel. [10] Less valuable serpentine ores of varying hardness and clarity are also sometimes dyed to imitate jade. [10] Misleading synonyms for this material include "Suzhou jade", "Styrian jade", and "New jade". 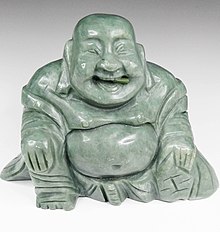 New Caledonian serpentine is particularly rich in nickel. The Māori of New Zealand once carved beautiful objects from local serpentine, which they called tangiwai, meaning "tears".

The lapis atracius of the Romans, now known as verde antique, or verde antico, is a serpentinite breccia popular as a decorative facing stone. In classical times it was mined at Casambala, Thessaly, Greece. Serpentinite marbles are also widely used: Green Connemara marble (or 'Irish green marble') from Connemara, Ireland (and many other sources[ citation needed]), and red Rosso di Levanto marble from Italy. Use is limited to indoor settings as serpentinites do not weather well. 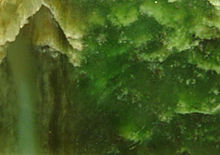 Polished slab of bowenite serpentine, a variety of antigorite. Typical cloudy patches and veining are apparent.

Lamellated antigorite occurs in tough, pleated masses. It is usually dark green in colour, but may also be yellowish, gray, brown or black. It has a hardness of 3.5–4 and its lustre is greasy. The monoclinic crystals show micaceous cleavage and fuse with difficulty. Antigorite is named after its type locality, the Geisspfad serpentinite, Valle Antigorio in the border region of Italy/ Switzerland.

Bowenite, a variety of antigorite, is an especially hard serpentine (5.5) of a light to dark apple green colour, often mottled with cloudy white patches and darker veining. It is the serpentine most frequently encountered in carving and jewellery. The name 'retinalite' is sometimes applied to yellow bowenite. The New Zealand material is called tangiwai.

Although not an official species, bowenite is the state mineral of Rhode Island, United States: this is also the variety's type locality. A bowenite cabochon featured as part of the "Our Mineral Heritage Brooch", was presented to U.S. First Lady Mrs. Lady Bird Johnson in 1967.

Williamsite is an American local varietal name for antigorite that is oil-green with black crystals of chromite or magnetite often included. Somewhat resembling fine jade, williamsite is cut into cabochons and beads. It is found mainly in Maryland and Pennsylvania. [11]

Gymnite is an amorphous form of antigorite. [12] It was originally found in the Bare Hills of Maryland, and is named from the Greek, 'gymnos', meaning "bare" or "naked".

In 1965, the California Legislature designated serpentine (the mineral) as “the official State Rock and lithologic emblem.” [13]