Sawtelle /sɔːˈtɛl/ is a district in the Westside of the city of Los Angeles, California, partially within the West Los Angeles subregion. It was established in 1899 and named after a manager of the Pacific Land Company who was initially responsible for its development and promotion.

Sawtelle is noted for its thriving Japanese American community, busy restaurants and arthouse movie theaters. It has strong roots in Japanese-American history. In recognition of its historical heritage, the area was designated Sawtelle Japantown in 2015. [1]

The Pacific Branch of the National Home for Disabled Volunteer Soldiers served as an attraction for both tourists and local real estate speculators. In 1906, the Pacific Branch became a stop on the Los Angeles Pacific Railroad's “Balloon Route”, [3] [4] a popular tour of local attractions conducted by an entrepreneur who escorted tourists via a rented streetcar, often from downtown Los Angeles to the ocean and back. [5] In 1905, residential lots and larger tracts in the new Westgate Subdivision, which joined “the beautiful Soldier’s Home”, and which were owned and promoted by Jones and Baker’s Santa Monica Land and Water Company, were for sale. [6] The new community of Sawtelle developed around the Pacific Branch when veterans’ families, as well as veterans themselves who were drawing relief, settled there. [7] Most of Sawtelle thus grew up after the veterans home was established.

Sawtelle existed as a separate city until 1922. According to the Los Angeles Times, [8] the following events took place: [9]

In 1918, the voters of Sawtelle decided by a margin of three votes to merge their city with Los Angeles. The vote was 519-516. However, the Board of Trustees, equivalent to a city council, refused to accept the decision and "ordered a challenge in the courts."

The city of Los Angeles, however, did not wait for a court decision but instead "rounded up a squad of policemen and 'swooped' down upon the Sawtelle City Hall, as one account put it at the time."

Sawtelle city officials were locked out of the City Hall, and the city of Los Angeles took over all the municipal and school activities.

In the meantime, the ousted Sawtelle trustees continued their case in the courts, and on September 15, 1921, the California Supreme Court decided the consolidation had indeed been illegal because the voters "had not been told on their ballots that they would have to pay a proportionate share of all Los Angeles debts for bonds."

Thirty-two days later the city of Los Angeles moved out of Sawtelle as quickly as it had moved in. Nine policemen packed up the records and left; eight firemen abandoned the fire engine and reported for work elsewhere. The city of Sawtelle was back in operation.

Businesses on Sawtelle Boulevard north of Olympic Boulevard in the city of Los Angeles, 2008

In 1922, another election was held, and once again Sawtelle voters decided to join Los Angeles. This time the merger was permanent, and the municipal district or neighborhood of Sawtelle was created. Sawtelle was the fourth city to be merged with Los Angeles, after Wilmington and San Pedro in 1909 and Hollywood in 1910.

Sawtelle is steeped in Japanese American history. Within Sawtelle lies a Japanese American community and business district along Sawtelle Boulevard, between Santa Monica and Olympic Boulevards. These are remnants of a larger Japanese American presence in the area before the population was disrupted by World War II, when many were displaced by Japanese-American internment. [10]

The name Sawtelle may refer to a larger district that is part of Los Angeles, a smaller unincorporated area of Los Angeles County that by definition is not part of the Los Angeles, or a combination of these, sometimes known as the Sawtelle area. The name has also been used to refer only to the Veterans Administration complex, including the modern hospital (West Los Angeles Medical Center) and north of Wilshire Boulevard, the former site of the historical Sawtelle Veterans Home and outbuildings.

The incorporated area of Sawtelle, to the south of the unincorporated area, includes the Sawtelle neighborhood, a 1.82-square-mile (4.7 km2) district of Los Angeles. It is roughly bounded by the Interstate 405 freeway to the east, National Boulevard to the south, Centinela Avenue to the west, and Bringham Avenue, San Vicente Boulevard, and the V.A. grounds on the north. Greater Los Angeles Health Center is in the unincorporated area. [11] The district was once an independent municipality, but was consolidated with Los Angeles in 1922. [12] The area extends about 1.0 mi (1.6 km) to either side of Santa Monica Boulevard, running westward about 1.3 miles (2.1 km) from Interstate 405 (the San Diego Freeway) and Sawtelle Boulevard, toward Santa Monica, ending at Centinela Avenue. Because the incorporated Sawtelle area now represents the northern part of West Los Angeles, it is bounded on the north by Brentwood and Westwood, which bound West Los Angeles. To the south is the rest of West Los Angeles, which is not considered part of the Sawtelle district.

The entire Sawtelle area includes portions of ZIP Codes 90049, 90064, and 90025 and all of ZIP Code 90073 (a P.O. ZIP Code within the 90025 area, used exclusively by the West Los Angeles Medical Center/ Veterans Affairs Wadsworth Medical Hospital).

The area is now served by Los Angeles Metro buses, [15] but as with a great deal of the Westside the lion's share of bus service is provided by the Santa Monica Big Blue Bus and the green coaches of the Culver CityBus system.

The Sawtelle neighborhood is served by the Bundy Station on the LA Metro E Line. The LA Metro D Line extension phase three is being constructed from Koreatowns Wilshire/Western station to Sawtelle with the West Los Angeles VA Medical Center as its last stop. The station is slated to open in 2027. [16]

Sawtelle is part of LA Department of Transportation's Slow Street program. [17] By limiting car traffic and prompting drivers to slow down, the pilot program was implemented to reclaim neighborhood roads for pedestrians, joggers, children and people with disabilities. The neighborhood was rated one of Los Angeles's 10 most walkable neighborhoods in 2017. [18]

Sawtelle is home to two independent arthouse movie theaters that are important cultural institutions to greater Los Angeles's film community. Nuart Theatre was built in 1929. It showcases domestic and foreign independent films and holds regular screenings of The Rocky Horror Show and other midnight movies. Laemmele Royal Theater, originally known as the Tivoli, was built in 1924 and is one of Southern California's last remaining single-screen theaters in daily operation.

The Village is also in Sawtelle. The iconic recording studio is the birthplace of Steely Dan's Aja, Frank Zappa's Joe's Garage, Bob Dylan's Planet Waves. Many major motion picture and television soundtracks were also recorded here, including O Brother, Where Art Thou?, Toy Story 2, Walk the Line, The X Files, Wall-E, The Shawshank Redemption. It has a famous mural on its south wall.

The Japanese Institute of Sawtelle, a cultural center for West Los Angeles's Nikkei community, is on Sawtelle's southern edge, on Sawtelle Boulevard. [19]

Stoner Park is a natural hub of the Sawtelle neighborhood with its attendant tennis courts, children's playground, skate plaza, seasonal outdoor pool, recreation center and Japanese garden. It is at the end of Stoner Avenue.

Sawtelle is part of the Los Angeles Unified School District

The Sawtelle area is within the University High School attendance district. 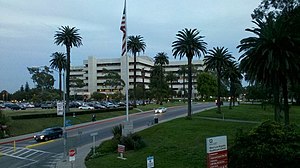 The grounds of the former Veterans Home, which was established in 1888, along with a cemetery and hospital for former soldiers and sailors, is also referred to as Sawtelle. This area, containing former hospital and apartment buildings and the historical veteran's home, and now converted to research and office space, is mostly north of Wilshire Boulevard. Since 1977, this area has formally included the Veterans Affairs (VA) Wadsworth Medical Center (now the West Los Angeles VA Medical Center), [14] which is south of Wilshire Boulevard from the former veteran's home site (see illustration above). This major hospital serves as part of the VA Greater Los Angeles Healthcare System. [4] The veterans home and hospital areas are both located west of the modern Interstate 405 freeway (San Diego Freeway), which bisects this federal parcel of land. It was part of a controversial plan in the 1960s, in which the property was proposed to be exchanged for Hazard Park in Boyle Heights, which would become home to a new VA hospital. The plan was shelved after seven years because of heavy public opposition., [25] [26] and instead, the present West Los Angeles Medical Center was built as the new hospital, in 1977. 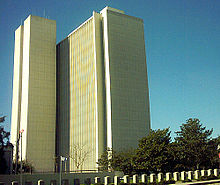 The Wilshire Federal Building in unincorporated Sawtelle, California at 11000 Wilshire Boulevard. The building is often mistakenly assumed to be in Westwood, but it sits just outside City of Los Angeles territory.

The Los Angeles National Cemetery, which is located east of Interstate 405, between Sepulveda Boulevard and Veteran Avenue, contains the remains of some 85,000 veterans and family members from the Mexican War to the present. The Wilshire Federal Building (photo at right, description below) is also east of the 405 freeway, immediately south of Wilshire Boulevard and the cemetery.

A major stand-alone federal office building in the area is the 19-story Wilshire Federal Building [27] (completed 1969) at 11000 Wilshire Blvd, Westwood, Los Angeles. The federal building is the most prominent symbol of federal power in the Los Angeles area, and is thus a popular site for protests against government policies.

From the 1980 U.S. Census to the 1990 U.S. Census an increase in construction caused the population to increase by 6.7%; the addition of 692 dwelling units increased the units in Sawtelle by 10.6%. The 1990 census stated that there were 14,042 residents in Sawtelle. There was no racial majority at that time. Barbara Koh of the Los Angeles Times wrote, "The racial percentages in Sawtelle in the 1990 Census were virtually unchanged from 1980". [29] In 1990, 48% of the residents were Anglo white, 26% were Latino or Hispanic, 23% were Asian, and 3% were black. [29] According to 2005 Los Angeles County government estimates, the unincorporated area of Sawtelle's population is 634. [30]

There is some gang activity within the area, but it has decreased considerably over the past decade. The Sotel 13 gang has claimed Stoner Park and its surrounding community as its territory since the 1950s, [32] and gang graffiti can still be found throughout the neighborhood. [33]

In fiction and popular culture