Santa Cruz County, California, officially the County of Santa Cruz, is a county on the Pacific coast of the U.S. state of California. As of the 2010 census, the population was 262,382. [3] The county seat is Santa Cruz. [5] Santa Cruz County comprises the Santa Cruz– Watsonville, CA Metropolitan Statistical Area, which is also included in the San Jose– San Francisco– Oakland, CA Combined Statistical Area. The county is on the California Central Coast, [6] south of the San Francisco Bay Area region. The county forms the northern coast of the Monterey Bay, with Monterey County forming the southern coast.

Santa Cruz County was one of the original counties of California, created in 1850 at the time of statehood. In the original act, the county was given the name of " Branciforte" after the Spanish pueblo founded there in 1797. A major watercourse in the county, Branciforte Creek, still bears this name. Less than two months later, on April 5, 1850, [7] the name was changed to "Santa Cruz" ("Holy Cross").

Mission Santa Cruz, established in 1791 and completed in 1794, was destroyed by the 1857 Fort Tejon earthquake, but a smaller-scale replica was erected in 1931.

The county is situated on a wide coastline with over 29 miles (47 km) of beaches. [9] It is a strip about 10 miles (16 km) wide between the coast and the crest of the Santa Cruz Mountains at the northern end of the Monterey Bay. It can be divided roughly into four regions: the rugged "north coast"; the urban City of Santa Cruz, Soquel, Capitola, and Aptos; mountainous Bonny Doon, San Lorenzo River Valley; and the fertile "south county", including Watsonville and Corralitos. Agriculture is concentrated in the coastal lowlands of the county's northern and southern ends. Most of the north coastal land comprises relatively flat terraces that end at steep cliffs like those shown in the photo below.

Santa Cruz County is home to the following threatened or endangered species: [10]

Historically, tule elk (Cervus canadensis nannodes) were native to the coastal grasslands of Santa Cruz County. Elk, sometimes confused with bison, were initially described by Miguel Costansó in his diary of the 1769 Portola Expedition near the mouth of the Pajaro River both on the way north on October 6, and on the way south on November 25. [24] Later, elk were also described by nineteenth century American hunters. [25] They were also described in Santa Cruz County by Jlli tribelet Awaswas Ohlone people, who utilized elk along with pronghorn (Antilocapra americana) and lived on the Jarro Coast (El Jarro Point is north of Davenport, California). [26] [27] Additionally, there is a "Cañada del Ciervo" (ciervo is Spanish for elk) close to the boundary between Rancho de los Corralitos and Rancho San Andrés, near the present-day Larkin Valley Road. This "Elk Valley" place name was given by José Antonio Robles who rode down, roped, and killed elk there in 1831. [28] [29] Lastly, elk remains dating from the Middle and Late Periods in Northern California were found in at least four late Holocene archeological sites in Santa Cruz County, all coastal: SCR-9 ( Bonny Doon site) and SCR-20 (Brown site) on the western slope of Ben Lomond Mountain, SCR-93 (Sunflower site) a coastal terrace on the north shore of the San Lorenzo River in Santa Cruz, and SCR-132 ( Scott Creek site) 4 miles inland. [30]

Pronghorn antelope (Antilocapra americana) remains were found at the SCR-20 (Brown site) on the western slope of Ben Lomond Mountain dating to about 1500 A.D. [30] 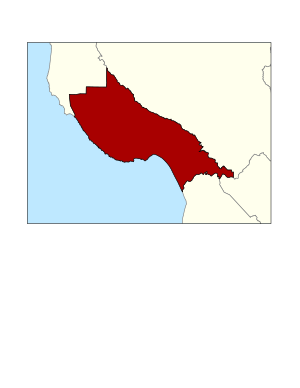 Santa Cruz County borders four other counties: San Mateo to the northwest, Santa Clara to the north and east, Monterey to the south, and San Benito with a small border to the south.

The county of Santa Cruz has experienced demographic fluctuations in recent history. Between 1990 and 2000, the population increased by 11.3%. This is primarily because of new births, rather than immigration or migration. [31]

Santa Cruz County residents tend to be well-educated. 38.3% of residents age 25 and older hold a bachelor's degree at least, significantly higher than the national average of 27.2% and the state average of 29.5%. [45] [46]

The last Republican to represent a significant portion of Santa Cruz in Congress was Burt L. Talcott, who was defeated in 1976 by Leon Panetta. [49] Santa Cruz County is split between California's 18th and 20th congressional districts, represented by Anna Eshoo ( D– Atherton) and Jimmy Panetta ( D– Carmel Valley), respectively. [50]

In 2008, 71.4% of voters in Santa Cruz County voted against Proposition 8, which amended the California Constitution to ban legal recognition of same-sex marriages.[ citation needed]

The following table includes the number of incidents reported and the rate per 1,000 persons for each type of offense:

10% of jobs in Santa Cruz County are food producing/processing jobs. These employees make less than an average of $10 an hour. [31]

The agriculture businesses are significant enough to be prominent in local politics, where they influence issues of water, pesticide use, and labor. [31]

There are mandated living wages for Santa Cruz county, and individually in the cities of Watsonville and Santa Cruz. These occurred after The Santa Cruz Living Wage Coalition campaigned to set up ordinances. [31]

The low wage sector of Santa Cruz experiences workplace abuse. Data from 2015 show that in the county, 38% of Agricultural workers have experienced overtime pay violation, 14% of tipped workers reported tips stolen by their employers, and 50% of service sector workers reported violations on receiving breaks. It is California law for employers to make written workplace policies available. However, in a county wide survey, 30% of workers reported that they did not receive an employee handbook. [58]

Service sector laborers have a resource for navigating labor law through the Economic Justice Alliance of Santa Cruz County, a local organization that educates community members on issues of "sustainable wages and working conditions." [59]

In 2002, the National Association of Realtors reported that Santa Cruz was the most unaffordable place to live in the United States. [31] This statement remains true with 2017 data that shows that Santa Cruz is the least affordable county for renters. [60]

Rent control has been attempted as a policy in Santa Cruz three times between the 1970s and 1980s, but it never passed. National policies since the 1980s have deregulated rental markets, which decreased the rights of tenants and exacerbated frustrations for renters all across the country as well as in Santa Cruz. [60]

27% of surveyed Santa Cruz County renters experience "overcrowding" in their homes, which is described as when there is more than one person per room of a house, which includes all rooms not just bedrooms. [60]

One of the constraints on Santa Cruz's development are environmental protections. The restrictions on land prevent development from responding to housing and employment demands, which is an issue particularly politically relevant in the Watsonville jurisdiction. This conflict between residents wanting to protect the environment and those wanting more housing is also racially divided, as most residents favoring environmental protection are white, while the population on the side of developing housing is more heavily Latino. [31] A 2010–2011 report by a Santa Cruz County grand jury states that Watsonville had no policy for assessing environmental hazards, and would give out land use and building permits without any investigations of the environmental conditions of the land in question. [62]

One of the housing solutions that residents have resorted to is the occupation of accessory dwelling units. Commonly known as "mother-in-law" units, these secondary housing spaces on residential property used to be illegal to build. In 2002, Santa Cruz leaders changed the law and encouraged construction with affordable mortgages. The goal was to contain urban sprawl while still finding housing alternatives for residents in light of the crisis that was exacerbated by UCSC growth and Silicon Valley encroachment. [63]

Debates about land use in Santa Cruz were particularly important after the 1989 Loma Prieta Earthquake, which destroyed the central business district of Santa Cruz and led to the loss of an estimated 2,000 jobs. [55]

Already contentious debates about land were present in the area due to its large tourism industry and the relatively new UCSC campus, but after the quake both private interests and public servants had a stake in how rebuilding would go. This led to a necessary compromise, a public-private partnership that debated the how to rebuild the pacific garden mall space, with considerations of green space, timely implementation, and supporting local business and economy. Many constituents felt left out of this process, and reported that the political elite and economic elite were monopolizing control over the rebuilding movement. [55]

According to the County's 2010 Comprehensive Annual Financial Report, [64] the top employers in the county are:

Vineyard in the Santa Cruz Mountains

Winemaking—both the growing of the grapes and their vinting—is an important part of the economic and cultural life of Santa Cruz County. The wines of the David Bruce Winery and Ridge Vineyards were selected for tasting in the Paris Wine Tasting of 1976 ( Tabor, p.167-169).

Watsonville Municipal Airport is a public general aviation airport. There are two air carriers based at the airport offering on-demand air charter:

There is a notable private airport, Monterey Bay Academy Airport, which is a former military base.

The population ranking of the following table is based on the 2010 census of Santa Cruz County. [68]