Santa Clara ( /ˌsæntəˈklærə/) is a city in Santa Clara County, California. The city's population was 116,468 as of the 2010 United States Census, making it the ninth-most populous city in the San Francisco Bay Area. Located on the southern coast of San Francisco Bay immediately west of San Jose and 45 miles (72 km) southeast of San Francisco, the city was founded in 1777 with the establishment of Mission Santa Clara de Asís, the eighth of 21 California missions. The city was later incorporated in 1852. The mission, the city, and the county are all named for Saint Clare of Assisi. [9]

Santa Clara is located in the center of Silicon Valley and is home to the headquarters of several high-tech companies such as Intel, Advanced Micro Devices, and Nvidia. It is also home to Santa Clara University, the oldest institution of higher learning in the state of California, which was built around Mission Santa Clara de Asís. [10] Levi's Stadium, the home of the National Football League's San Francisco 49ers, is located in the city. Santa Clara is bordered by San Jose on all sides, except for Sunnyvale and Cupertino to the west.

Mission Santa Clara de Asís was founded by the Spanish in 1777.

The 1847 Battle of Santa Clara, part of the Conquest of California, was fought between Americans and Californios. 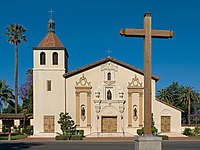 The first European to visit the valley was José Francisco Ortega in 1769. He found the area inhabited by Native Americans, whom the Spanish called the Costanos, "coast people", later known as the Ohlone. The Spanish began to colonize California with 21 missions and the Mission Santa Clara de Asis was founded in 1777.

In 1846, the American flag was raised over Monterey and symbolized the transfer of the sovereignty of the California Republic over to the United States. In 1851, Santa Clara College was established on the grounds of the original Mission. In 1852, Santa Clara was incorporated as a town; it became state-chartered by 1862.

For the next century, the economy centered on agriculture since orchards and vegetables were thriving in the fertile soil. By the beginning of the 20th century, the population had reached 5,000 and stayed about the same for many years.

In 1905, the first public high-altitude flights by humans were made over Santa Clara in gliders designed by John J. Montgomery. The semiconductor industry, which sprouted around 1960, changed the city and surrounding Valley of Heart's Delight; little of its agricultural past remains.

Santa Clara's first medical hospital was built in 1963. This structure, on Kiely Boulevard, was replaced in 2007 with the new Kaiser Permanente medical center located on Lawrence Expressway at Homestead Road.

Santa Clara was also home to a major mental health facility, Agnews State Hospital. According to the National Park Service, more than 100 persons were killed at this site in the 1906 earthquake. The site is the former home to Sun Microsystems and is listed in the National Register of Historic Places.

Downtown Santa Clara: the 1963 City Council voted to knock down the 8 block grid of the downtown area next to Santa Clara University bordered by Lafayette, Benton, Monroe, and Homestead (previously named Liberty in 1963) to receive federal funding from Urban Renewal in the USA. In 2018 there is a parking lot and Franklin Mall on Washington St (2 blocks) with the one-state historical building is, Santa Clara Post Office, apartment building, county courthouse, and strip mall. [11] [12]

Santa Clara is drained by three seasonal creeks, all of which empty into the southern portion of San Francisco Bay; these creeks are San Tomas Aquino Creek, Saratoga Creek, and Calabazas Creek.

There are some significant biological resources within the city including habitat for the burrowing owl, a species of special concern in California due to reduction in habitat from urban development during the latter 20th century. [13] This owl uses burrows created by ground squirrels and prefers generally level grasslands and even disturbed areas. Coyotes have also become active in the area in recent years. [14]

According to the United States Census Bureau, the city covers an area of 18.4 square miles (48 km2), all of its land.

Despite being located only 45 miles from San Francisco, Santa Clara's climate is rather distinct—particularly during the summer, when it is generally warm and sunny, as opposed to the foggy and cool conditions one normally finds in San Francisco. The average daily temperatures in July range from 82 °F (28 °C) to 53 °F (12 °C). Winters are mild, with the mean daily temperatures in January ranging from 58 °F (14 °C) to 38 °F (3 °C). Most of the annual rainfall comes in the winter months; the summer months are generally rainless.

According to the city's 2020 Comprehensive Annual Financial Report, [23] the top employers in the city are:

Park near the library

Santa Clara has two major train stations: the Santa Clara – Great America station and the Santa Clara station. Both stations are served by Amtrak's Capitol Corridor train and the Altamont Corridor Express (ACE); the latter is also served by Caltrain. There is also a light rail system operated by the Santa Clara Valley Transportation Authority (VTA), which also operates the city's buses.

Santa Clara Unified School District is the public school district that serves Santa Clara and small portions of Sunnyvale and North San Jose. The city is home to nineteen K–8, elementary, and high schools. Many of the schools are named for former farmers, ranchers, and other notable Santa Clara residents such as Bowers and Bracher elementary schools, Buchser Middle School, Wilcox High School, and Santa Clara High School. A small part of the city however is served by Cupertino High School and its feeder schools in the nearby town of its namesake.

Private elementary schools and high schools in Santa Clara include:

The city is also home to the Santa Clara City Library. [34]

The Santa Clara Broncos are the Division I NCAA athletic programs of Santa Clara University. Santa Clara sponsors 19 different teams, most of which compete in the West Coast Conference. The red and white of the Santa Clara Broncos is featured on the flag of the city, as is the Mission which lies at the heart of the campus. Santa Clara has long benefited from support from the local community, and the Broncos have achieved a bevy of intercollegiate success, notably in Men's Basketball, Baseball, and both Men's and Women's soccer. Santa Clara's Leavey Center, Buck Shaw Stadium, and Stephen Schott Stadium are all noted as some of the finest facilities of their size on the West Coast.[ citation needed] Santa Clara University and its athletic programs play heavily into the culture and history of Santa Clara.

Beginning in the 2014 National Football League season, the San Francisco 49ers play their home games at Levi's Stadium, which opened on July 17, 2014. The stadium hosted WWE's WrestleMania 31 on March 29, 2015, and Super Bowl 50 on February 7, 2016. The 49ers were founded by Tony Morabito, a Santa Clara University alumnus who chose the red and white of his alma mater for the football team. As a result, the return of the 49ers to Santa Clara is something of a homecoming.

The San Jose Earthquakes of Major League Soccer no longer play their home games at Buck Shaw Stadium, located at Santa Clara University. At one point the entire team and management moved to Houston and formed the Houston Dynamo. Recently the Earthquakes have fielded a new team, with new management in the Silicon Valley. Both teams have been highly successful.

The Santa Clara Vanguard, a competitive marching music organization, has been headquartered in Santa Clara since its inception. The organization runs and operates a winter guard, an indoor percussion ensemble, and two drum and bugle corps, all of which compete across the country every year. All four ensembles have been very successful competitively, especially the two drum corps, one of which has won 6 Open Class titles and the other 7 World Class titles. The latter is the only drum corps that has made finals every year since the beginning of Drum Corps International.

Santa Clara is also home to California's Great America, an amusement park currently operated by Cedar Fair, L.P.. Nearby is the Santa Clara Convention Center, one of Silicon Valley's largest event and meeting venues. Santa Clara also offers several museums such as the Intel Museum, Triton Museum of Art, and the Harris – Lass historical house. Near the above-mentioned Mission College is the Our Lady of Peace Shrine notable for its thirty-two-foot tall statue which is viewable from Highway 101 in a manner similar to the statue of Junípero Serra in Hillsborough, California. The Mission City Center for Performing Arts is the city's venue for theatrical productions and entertainment.

The San Francisco 49ers NFL football team has its headquarters and practice facilities in Santa Clara. On Wednesday, November 8, 2006, the 49ers announced their intention to move the team to Santa Clara in time for the fall 2014 season, after negotiations failed with the city of San Francisco to build a new stadium. [35]

In 2011, Santa Clara voters approved a plan to build a 68,500-seat stadium for the San Francisco 49ers of the National Football League. The groundbreaking for the stadium, located 45 miles southeast of San Francisco, occurred on April 19, 2012. [36] The stadium is located between the Great America park (to the south) and the Convention Center. The official ribbon cutting took place on Thursday, July 17, 2014. The first professional sporting event hosted at the stadium was a Major League Soccer (MLS) match between the San Jose Earthquakes and the Seattle Sounders on August 2, 2014. The first professional football event hosted at the stadium was a pre-season game between the 49ers and the Denver Broncos, played on August 17, 2014.

The stadium hosted Super Bowl 50 on February 7, 2016, between the Denver Broncos and the Carolina Panthers – the Broncos won the game 24–10.

The stadium has also hosted the 2017 Pac-12 Football Championship Game between USC and Stanford.