From Wikipedia, the free encyclopedia
Neighborhood of Los Angeles in Los Angeles

The peninsula, including all of San Pedro, was the homeland of the Tongva-Gabrieleño Native American people for thousands of years. In other areas of the Los Angeles Basin archeological sites date back 8,000–15,000 years. The Tongva believe they have been here since the beginning of time. Once called the "lords of the ocean", due to their mastery of oceangoing canoes (Ti'ats), many Tongva villages covered the coastline. Their first contact with Europeans was in 1542 with Juan Rodríguez Cabrillo, the Spanish explorer who also was the first to write of them. Chowigna and Suangna were two Tongva settlements of many in the peninsula area, which was also a departure point for their rancherias on the Channel Islands. Legend has it that the Native Americans blessed the land of Palos Verdes, making it the most beautiful place on Earth. The Tongva called the San Pedro area "Chaaw". [6][ self-published source?]

San Pedro was named for St. Peter of Alexandria, a fourth-century bishop in Alexandria, Egypt. His feast day is November 24 on the local ecclesiastical calendar of Spain, the day on which Juan Rodríguez Cabrillo discovered the bay in 1542. [5] Santa Catalina Island, named after Catherine of Alexandria, was claimed for the Spanish Empire the next day, on her feast day, November 25. In 1602–1603, Sebastián Vizcaíno (1548–1624) officially surveyed and mapped the California coastline, including San Pedro Bay, for New Spain. The anglicized pronunciation is "san-PEE-dro". [4] 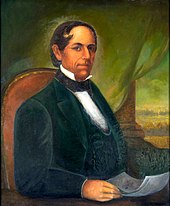 Don Manuel Domínguez, a Californio politician, signer of the Californian Constitution and owner of Rancho San Pedro helped found the settlement at San Pedro, then a small fishing village.

European settlement began in 1769 as part of an effort to populate California, although trade restrictions encouraged more smuggling than regular business. In 1784, the Spanish Crown deeded Rancho San Pedro, a tract of over 75,000 acres (300 km2), to retired soldier Juan José Domínguez, who helped explore California with the Portolá expedition in 1769–1770. Rancho San Pedro was the first land grant in the Alta California portion of the Province of Las Californias in New Spain.

When New Spain won its independence from the Spanish Empire and Alta California became part of Mexico, the trade restrictions were lifted, and the town flourished.

Under United States control after 1848, when the United States defeated Mexico in the Mexican-American war, the harbor was greatly improved and expanded under the guidance of Phineas Banning and John Gately Downey, the seventh governor of California after the Free Harbor Fight. In 1868 Banning created the Los Angeles & San Pedro Railroad, Southern California's first railroad and used it to transport goods from San Pedro Bay to Los Angeles, which soon became a major city in Southern California. [7]

San Pedro was a township in the 1860 census. The township consisted of the present-day South Bay communities, Compton and western Long Beach. [8] Census records report a population of 359 in 1860. The township was renamed Wilmington Township for 1870. [9]

In 1906, the city of Los Angeles annexed the Harbor Gateway, a long, narrow strip of land connecting the city to the northern border of Wilmington, and in 1909, the larger city consolidated with Wilmington and with San Pedro. [10]

In 1929, the city experienced the Sunken City Disaster, where an earthquake caused multiple homes to slide off a cliff into the sea. [11]

In 1888, the War Department took control of a tract of land next to the bay and added to it in 1897 and 1910. This became Fort MacArthur in 1914 and was a coastal defense site for many years. Woodrow Wilson transferred 200 United States Navy ships from the Atlantic to the Pacific in 1919 when tension arose between the United States and Japan over the fate of China. San Diego Bay was considered too shallow for the largest ships, so the battleships anchored in San Pedro Bay on August 9, 1919. Local availability of fuel oil minimized transportation costs, and consistently good weather allowed frequent gunnery exercises off the nearby Channel Islands of California. The heavy cruisers of the Scouting Force were transferred from the Atlantic to San Pedro in response to the 1931 Japanese invasion of Manchuria. By 1934, 14 battleships, two aircraft carriers, 14 cruisers, and 16 support ships were based at San Pedro. On April 1, 1940, the Pacific Fleet battleships sailed to Hawaii for annual fleet exercises. The battleships remained in the Hawaiian Islands to deter Japanese aggression until the attack on Pearl Harbor. The fleet post office, supply depot, fuel depot, degaussing range, ECM repair facility, and naval training schools for small craft, fire fighters, merchant ship communications, and anti-submarine attack remained at San Pedro through World War II; [12] but the battle fleet never returned. [13]

San Pedro was selected as the final home port of the battleship USS Iowa (BB-61). The Iowa now serves as a museum ship and memorial recognizing "the positive contributions of this battleship and its crew at critical moments in American history". [14]

Fort MacArthur now a sub base of Los Angeles Air Force Base currently serves as privatized housing and administrative annex under the management of Tierra Vista Communities.

In this nighttime aerial photograph of Los Angeles, San Pedro is in the center and right foreground, including part of the brightly lit Terminal Island. The dark peninsula to the left of San Pedro is Palos Verdes.

The neighborhood fronts on the Pacific Ocean to the south and is bounded inland by Harbor City and Torrance on the north, Wilmington and Long Beach on the east and Rancho Palos Verdes and Lomita on the west. [15] [16] [17]

San Pedro, Wilmington, and Terminal Island are the locations of the Port of Los Angeles.

One San Pedro landmark is the Vincent Thomas Bridge, a 1,500-foot (457 m)-long suspension bridge linking San Pedro with Terminal Island and named after California Assemblyman Vincent Thomas. (It is the fourth longest suspension bridge in California.) Nearby is the Battleship Iowa museum and attraction, the Los Angeles Maritime Museum (the largest maritime museum in California), and the museum ship SS Lane Victory (a fully operational victory ship of World War II and National Historic Landmark). Ports O' Call Village, a tourist destination, which provided shopping venues, waterfront eateries, was demolished in 2019 to make way for West Harbor, a major waterfront food hall and park under development, slated to open in 2021. [19] [20] A historic naval warehouse built in 1944 houses Crafted at the Port of Los Angeles, a permanent craft marketplace.

The Frank Gehry–designed Cabrillo Marine Aquarium had its origins in the old Cabrillo Beach Marine Museum which was located in the historic Bath House at Cabrillo Beach. The Point Fermin Lighthouse, a Victorian-era structure built in the late 19th century, is a museum and park on a bluff overlooking the ocean. The Korean Bell of Friendship is a massive bronze memorial bell donated by South Korea in 1976 to the people of Los Angeles. The church of Mary Star of the Sea is a prominent landmark with a steeple-top statue overlooking the harbor.

On July 19, 2003, the San Pedro Waterfront Red Car Line was opened, along the waterfront between downtown San Pedro and the Cruise Ship Terminal. The line includes two trolleys built to resemble the wood-bodied 500 class cars introduced in 1905 for the Pacific Electric Railway, which once operated more than 1,000 miles (1,600 km) of track running streetcars and interurbans in Southern California. The 1.5-mile (2.4 km) line operates along former Pacific Electric right-of-way. The line, rebuilt and maintained by the Port of Los Angeles, also has one original restored Pacific Electric interurban, which is used only for special charter excursions and special events. The original car is Pacific Electric 963 (former Los Angeles Pacific 713 as built in 1907) rebuilt by Richard Fellows and renumbered 1058. Discussions have been held to extend the line to the Cabrillo Marine Aquarium. [21]

On 28th Street, between Gaffey Street and Peck Avenue, is a steep section of public roadway. For about 50 feet (15 m), the street climbs at a 33.3% angle, although the rest of the street is less steep. [22] 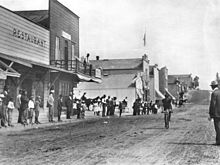 Ethnically diverse San Pedro was a magnet for European immigrants from various countries for years, reflected in the number of restaurants representing diverse cuisines, especially Croatian, Portuguese, Mexican, Italian, Irish and Greek. San Pedro is home to the largest Italian-American community in Southern California, centered on the "Via Italia" (South Cabrillo Avenue). Estimates state that the community numbers about 45,000 Italian-Americans. San Pedro is also considered the heart of the Croatian and Norwegian communities in Los Angeles. The Croatian community, originally composed of seafarers and fishermen from the Dalmatia (especially the islands of Brač, Hvar, Vis and Korčula) region, has been present in San Pedro since the settlement began more than 200 years ago. The City of Los Angeles even named a stretch of 9th Street "Croatian Place" in honor of the city's old Croatian community. The Norwegian presence can be felt at the Norwegian Seamen's Church.

Until February 1942, San Pedro was home to a vibrant Japanese immigrant community of about 3,000 people who lived in what had been described as a "typical Japanese Fishing Village" on Terminal Island (East San Pedro). These Japanese immigrants pioneered albacore fishing out of San Pedro Bay and harvesting abalone off of White Point, [23] thus leading the way in establishing a viable fishing industry in San Pedro. The 48-hour forced expulsion of these San Pedro residents and the razing of their homes and shops, as part of the Japanese-American internment during World War II, is described in Jeanne Wakatsuki Houston's memoir Farewell to Manzanar.

A total of 80,065 people lived in San Pedro's 12.06 square miles, according to the 2000 U.S. census—averaging 6,640 people per square mile, near Los Angeles' total population density rate. The median age was 34 in the San Pedro neighborhood, considered average for Los Angeles. [24]

The $57,508 median household income in 2008 dollars was average for the city and county. Renters occupied 56.1% of the housing units, and homeowners occupied the rest. In 2000 there were 3,394 families headed by single parents, or 17.5%, a rate that was average for the county and the city. In the same year there were 6,559 military veterans, or 11% of the population, considered high when compared to the city and county as a whole. [24]

Just 23.8% of San Pedro residents aged 25 or older had completed a four-year degree in 2000, about average when compared with the city and the county at large, and the percentage of those residents with more than a high school diploma was high for the county. [24]

San Pedro is served by the Los Angeles Unified School District. The area is within Board District 7. [30] As of 2012, Dr. Richard Vladovic represents the district. [31]

San Pedro High School, Mary Star of the Sea High School, and the Port of Los Angeles High School are the primary high schools within the region. San Pedro High School is home to the protected landmarks in the form of The English Language Arts and Administration Buildings (c. 1939, 1936, resp.). The school recently celebrated its 100-year anniversary in 2003. It is home to both the Marine Science and Police Academy Magnet programs. Port of Los Angeles High School is a public charter high school, fusing a college preparatory program with elective coursework in International Business and Maritime Studies. Such studies reinforce the significant impact of California's ports on the global economy and international trade.

As of 2012, test scores tended to be higher in the area's elementary schools than in its middle and high schools. [32]

Private schools in San Pedro include:

Los Angeles Public Library operates the San Pedro Regional Branch Library at 931 South Gaffey. This library was opened in 1983 in the presence of the late Los Angeles Mayor Tom Bradley. [62]

San Pedro was declared 2017 Neighborhood of the year by Curbed Los Angeles. [63]