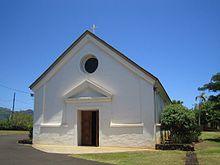 The present sanctuary of St. Raphael's Church in Koloa, Kauai (Hawaii) was constructed in 1856 and renovated in 1936.

The oldest Catholic Church in Kauai, St. Raphael's was founded in 1841 by Father Arsenius Walsh. [1] It was founded two years after Catholics were granted religious freedom in Hawaii after the French threatened Honolulu. The church building was completed in 1854. It was enlarged and renovated in 1936. [2]