Maritime College is the oldest institution of its kind in the United States. [2] Due in part to the Civil War, there was a decline in the American maritime industry and a growing concern about the professionalism of its officers. As a result, the New York Chamber of Commerce and maritime interests of the port of New York lobbied the state legislature to create a professional nautical school for the city. This was done in 1873, but the school lacked a ship. The chamber then teamed up with the noted naval education reformer and modernizer, Stephen B. Luce. Luce led the effort, and through his efforts an act was passed by Congress in 1874 that enabled individual states to request from the Navy retired or obsolete vessels to train seamen. The state of New York then appealed to the Navy for a training vessel. On December 14, 1874, the USS St. Mary's arrived in New York harbor and became the home of the longest running nautical school in the United States. Originally administered by the Board of Education of the City of New York, it was conducted as a grammar school that taught common school subjects (along with nautical classes) during the winter term, and then held practical cruises during the summer term. As time advanced, the school began to teach more advanced professional subjects. During this early period, the school was typically run on an annual appropriation of $20,000 to $30,000 with the school often facing closure because the cost per pupil was much higher than in a regular public school, mainly due to the overhead of ship maintenance and student board. 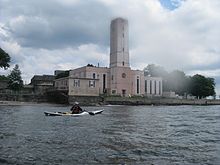 SUNY Maritime College from the shore

By 1907, the St. Mary's was replaced by the gunboat Newport, a sail-steam hybrid.

In 1913 New York City threatened to close the school due to its costs. However, the state of New York took over its management and renamed it the New York State Nautical School. Despite being a state institution, the school was almost closed in 1916, again for budgetary reasons, but efforts from the maritime industry and the school's alumni kept it alive. After this time, the American merchant marine grew and subsequently a greater demand for trained American merchant marine brought growth to the school.

During this period, the school was administered by a Board of Governors in addition to the Superintendent. In 1921, the school, which had for long moved from berth to berth, found itself at Bedloe's Island (now Liberty Island) in New York Harbor. There they were allowed to use the army facilities. Over time, conditions on the island were deemed inadequate to teach modern merchant mariners.

With the growing demand, a push was made by then superintendent James Harvey Tomb beginning in 1927 to acquire a larger ship and a land-based institution. [3] The ship came in the form of the Procyon, which was renamed the Empire State. This ship effectively doubled the size of the school. Finally, the school, renamed the "New York State Merchant Marine Academy" in 1929, became land-based in 1938 at the Maritime College's present Throggs Neck campus in Fort Schuyler. One of Franklin D. Roosevelt's last acts as Governor of New York State was to sign the act turning Fort Schuyler and the Throggs Neck peninsula over to the school for use as a shore-based facility of higher education. Work restoring Fort Schuyler for the academy's use was done at first by the Temporary Emergency Relief Administration (TERA) in 1934 followed by the Works Progress Administration in 1935. The fort was restored, allowing the school to operate there by 1938. In 1946 degree conferring status was granted, and the academy became a college. The college was one of the original institutions incorporated into the State University of New York system in 1948. [4]

Due to the COVID-19 pandemic, the decision was made to move the students out of the dorms 16 March 2020. Three plans were implemented in regard to Summer Sea Term 2020: a 60 day summer sea term starting in June, a 30 day summer sea term starting in July, or no sea term for the summer of 2020. With the situation regarding the pandemic worsening, the college decided not to do a summer sea term. However, the college let any regimental students come to campus on 13 July 2020 for 30 days as a way to get sea days needed to graduate, take the burden off of sea days needed for Summer Sea Term 2021 (as there would be too many students on the ship who need to catch up on sea days), and to finish any outstanding license assessments from the spring semester that could not have been done remotely.

All of the college's bachelor's degree programs may be combined with preparation for the professional license as a United States Merchant Marine Officer. The College also offers a master's degree in International Transportation Management and Maritime and Naval Studies; as well as several graduate Professional Mariner Training certificates. [5] Most of the degree programs may be completed while concurrently preparing for the United States Merchant Marine officer's license as a third mate or third assistant engineer. Additionally, SUNY Maritime College has the only United States Navy/ United States Marine Corps Reserve Officers Training Corps (ROTC) program in the metropolitan New York City area, which prepares enrollees for commissioned officer positions in the United States Navy and United States Marine Corps. As of 2017 [update], the graduates of SUNY Maritime College earned US$144,000, the highest average annual salary of any university graduates in the United States. [6]

SUNY Maritime College has a regiment to fulfill the USCG requirements for obtaining a license through a college. [7] The regiment has a Pipe and Drum Band, [8] Regimental Band, Honor Guard (Color Guard and Drill Team [9]), and a Security Company. The Band and Honor Guard perform at events both on and off campus, such as parades and dinners.

Incoming Cadets must go through Indoctrination (shortened to INDOC), a ten days of training in August where they learn leadership and basic seamanship skills. During freshman year, aka Mariner Under Guidance (MUG) year, Cadets are made to square corners, stand at attention for all upperclassmen, have room inspections, and maintain the uniform of the day. [10]