From Wikipedia, the free encyclopedia
Top tier of association football in Turkey
This article is about the league in Turkey. For the league in Northern Cyprus, see KTFF Süper Lig.
Football league

The Süper Lig (Turkish pronunciation:  [ˈsypæɾ liɟ], Super League), officially known as Spor Toto Süper Lig for sponsorship reasons, is a Turkish professional league for association football clubs. It is the top-flight of the Turkish football league system and is run by the Turkish Football Federation. In the 2022–23 season, nineteen clubs compete, where a champion is decided and three clubs are promoted from, and relegated to the 1. Lig. The season runs from August to May, with each club playing 36 matches. Matches are played Friday through Monday.

The competition was initially established in 1923. The league succeeded the Turkish Football Championship and the National Division, both being former top-level national competitions. The Süper Lig is currently 20th in the UEFA coefficient ranking of leagues based on club performances in European competitions over the last five years. A total of 73 clubs have competed in the Süper Lig, but only six have won the title to date: Galatasaray (22), Fenerbahçe (19), Beşiktaş (16), Trabzonspor (7), İstanbul Başakşehir (1) and Bursaspor (1).

Football in Turkey stems back to the late 19th century, when Englishmen brought the game with them while living in Salonica (then part of the Ottoman Empire). [3] The first league competition was the Istanbul Football League, which took place in the 1904–05 season. The league went through several variations until the creation of the Millî Lig (Süper Lig) in 1959. Between the creation of the Istanbul League and Millî Lig, several other regional leagues took place: Adana (1924), Ankara (1922), Eskişehir (1924), İzmir (1924), Bursa (1924), and Trabzon (1922), to name a few. The first competition to bring forth a national champion was the former Turkish Football Championship, which began in 1924 and continued until 1951. [4] The championship format was based on a knockout competition, contested between the winners of each of the country's top regional leagues. [5] The National Division (Turkish: Millî Küme) was the first national league competition in Turkey. Started in 1937, the National Division consisted of the strongest clubs from the Ankara, Istanbul, and İzmir leagues. The championship lasted until 1950. [6] [7] 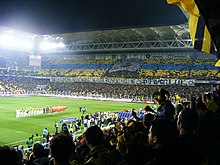 The Federation Cup was established in 1956 to decide a national champion. This champion would go on to participate in the European Cup. The competition was held for two seasons until it was replaced by the Millî Lig. Beşiktaş won both editions and qualified for the European Cup during the two-year span. However, since the TFF failed to register their name for the draw in time, Beşiktaş could not participate in the 1957–58 season after all. [8] [9]

The 2. Lig (Second League) was created at the start of the 1963–64 season and the Millî Lig became known as the 1.Lig (First League). Before the foundation of a second division, the bottom three clubs competed with regional league winners in a competition called the Baraj Games. The top three teams of the group were promoted to the Süper Lig. After the foundation of a new second division in 2001, known as the 1. Lig, the formerly titled 1. Lig was rebranded as Süper Lig. [11] The Süper Lig is home of the Fenerbahçe–Galatasaray derby, the most watched football game in Turkey. It is considered to be one of the best and most intense in the world, being ranked among the greatest football rivalries of all-time by various international sources. [12] [13] [14] 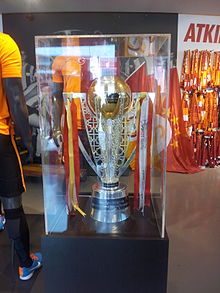 Current design of the Süper Lig Trophy, in use since 2015.

There has been 18 clubs in the Süper Lig until 2020. 20 Clubs are competing in the Süper Lig starting from 2020. During the course of the season (from August to May) each club plays the others twice (a double round robin system), once at their home stadium and once at that of their opponents, for a total of 38 games. Teams receive three points for a win and one point for a draw. No points are awarded for a loss. Teams are ranked by total points, then head-to-head record, then goal difference, and then goals scored. At the end of each season, the club with the most points is crowned champion. If points are equal, the head-to-head record and then goal difference determine the winner. The three lowest placed teams are relegated to the 1. Lig and the top two teams from the 1. Lig, together with the winner of play-offs involving the third to sixth placed 1. Lig clubs are promoted in their place. [15] 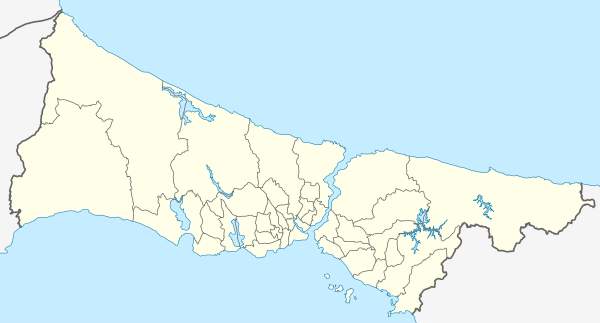 In total, fifteen different clubs have won the Turkish championship title, including titles won before the Süper Lig's inception, namely in the former Turkish Football Championship and Turkish National Division, [17] which are denied and not counted by the Turkish Football Federation, even though they were official championships by the TFF itself. Galatasaray claim to have won the most national championships, with 22 titles in total; However, in fact they only won 22 titles recognized by the federation.

Only six clubs have been champions since the introduction of the Super League: Galatasaray 22 times, Fenerbahçe 19 times, Beşiktaş 16 times (see note below), Trabzonspor 7 times, and Bursaspor and İstanbul Başakşehir once each.

1 Beşiktaş formally requested that championships won in the 1956–57 and 1957–58 editions of the Turkish Federation Cup be counted as Turkish Professional First Division championships to the Turkish Football Federation. The Cup was established in 1956 to find a national champion to represent Turkey, after UEFA decided that only national champions could participate in the European Cup. [17] Beşiktaş had therefore earned the right to represent Turkey in the European Cup in the 1957–58 and 1958–59 seasons. [19] The ruling on this matter was announced in a press release on March 25, 2002 which indicated that the championships won by Beşiktaş in the Federation Cup would be counted as national league championships.

As of 2022, 74 clubs have participated. Note: The tallies below include up to the 2022–23 season. Teams denoted in bold are current participants.

‡ Galatasaray was one of the final eight teams of the 1993–94 UEFA Champions League group stage, however UEFA does not consider this a quarter-final participation.