From Wikipedia, the free encyclopedia
Diocese of the Catholic Church 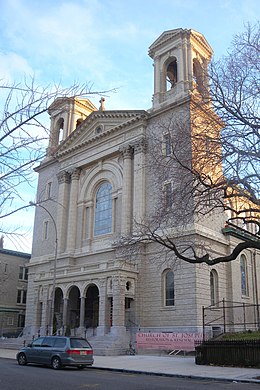 Brooklyn is one of the few dioceses in the United States that is made up of 100% urban territory. [1]

The Bishop of the Diocese of Brooklyn, Bishop Nicholas DiMarzio, presides from both the Cathedral Basilica of St. James and the Co-Cathedral of St. Joseph. This atypical arrangement was required due to the small size of the Cathedral Basilica of St. James. St. Joseph's Church was designated as a Co-Cathedral for the Diocese of Brooklyn on February 14, 2013, by Pope Benedict XVI after Bishop Nicholas DiMarzio petitioned the Vatican.

The diocese was established in 1853 out of the territory of the Roman Catholic Archdiocese of New York, at a time when Brooklyn was still a separate city from New York City. It originally included all of Long Island, but its present-day territory was established in 1957 when Nassau and Suffolk counties were split to form the Diocese of Rockville Centre. [2]

The opening of the Brooklyn Navy Yard in 1801 drew a number of immigrants, largely Catholics from Northern Ireland, especially from Derry and Donegal. They would cross the East River to attend services at St. Peter's Church on Barclay Street. Periodically, Rev. John Power or others would come to celebrate Mass at the home of William Purcell or at Dempsey's Blooming Grove Garden on Fulton St. The Church of St. James was erected in 1822. In July, 1841, Father Johann Stephen Raffeiner, from the Tyrol, began the German parish of the Most Holy Trinity on a part of the farm of the old Dutch Meserole family in the Bushwick section. Holy Cross Cemetery was opened in 1849. In 1853, Archbishop John Hughes appointed his vicar-general, Irish-born John Loughlin, former pastor of St. Patrick's on Mulberry St. as bishop of the new diocese. Loughlin chose St. James as his cathedral. [3]

During his episcopate, Loughlin founded 120 parishes. Plans to build the larger Cathedral of the Immaculate Conception were deferred in favor of orphanages, schools, and hospitals. He was succeeded in 1892, by Bishop Charles Edward McDonnell, former chancellor of the Roman Catholic Archdiocese of New York. The Roman Catholic Diocese of Brooklyn served at that time 250,000 Catholics. With the increase in the number of immigrants of various nationalities, McDonnell founded a number of national churches which ministered to parishioners in their own language. To this end, he invited several religious institutes into the diocese, including the Redemptorists, Benedictines, Franciscans (including the Minor Conventuals and Capuchins), Jesuits, Sisters of the Holy Family of Nazareth, Missionary Sisters of the Sacred Heart, Daughters of Wisdom, and Sisters of the Holy Infant Jesus. [4] He also built three hospitals. Camp Wycoff and Camp Black, set up during the Spanish–American War were attended by local clergy.

Thomas Edmund Molloy was named the third Bishop of Brooklyn on November 21, 1921. In 1930 Bishop Molloy established the Seminary of the Immaculate Conception. The Roman Catholic Diocese of Rockville Centre was split off from Brooklyn April 6, 1957. Ten days later, Bryan Joseph McEntegart became the next Bishop of Brooklyn. He built six high schools, Cathedral Preparatory Seminary, and a hospital. He improved outreach to the growing Hispanic population, he sent priests and religious to study Spanish language and culture. Bishop Francis Mugavero experience as former head Brooklyn's Catholic Charities was reflected in his episcopate. In 1971, Mugavero established the Catholic Migration Office to serve the needs of immigrants and refugees living in Brooklyn and Queens. The Nehemiah project produced affordable housing in Brownsville.

In September 2018, the Roman Catholic Diocese of Brooklyn agreed to a record $27.5 million settlement for sex abuse allegations. [5] On February 15, 2019, the Roman Catholic Diocese of Brooklyn and Queens made public a list of 108 clergy who were "credibly accused" of committing sexual abuse, [6] [7] [8] some of whom have also been convicted for their crimes. [9] [8] Along with the list, Bishop Nicholas DiMarzio also issued a letter of apology, asking for forgiveness. [10] In June 2020, the FBI arrested Rev. Francis Hughes, a priest serving in Queens, on child pornography charges and sex-related charges involving underage minors. [11] Hughes, who was also caught sharing explicit texts and photos with an underage 15 year old boy, admitted to having a sexual encounter with a teen boy on school grounds in Queens and also making numerous previous attempts to meet other teens for sex. [11]

Main article: List of churches in the Roman Catholic Diocese of Brooklyn

Bishops of the Diocese of Brooklyn

Priests "equivalent to diocesan bishops" affiliated with this diocese

See also: List of schools in the Roman Catholic Diocese of Brooklyn

The sitting bishop is also the true principal of the diocese's pre-seminary high school, Cathedral Preparatory Seminary. As of March 2009, Cathedral Preparatory Seminary is the only full-time high school seminary in the nation[ citation needed]. Three Diocesan and/or parish high schools are under the auspices of the Roman Catholic Diocese of Brooklyn and Queens[ citation needed]. As of 2019, only 36 Diocese of Brooklyn schools were still not scheduled to close, compared to the 102 which were operational in the 1980s. [12] Between the mid-2000s and 2019, the Roman Catholic Diocese of Brooklyn permanently closed 45 of its schools. [12]

There are three diocesan and/or parish high schools under the auspices of the Roman Catholic Diocese of Brooklyn. While the Catholic high schools below may geographically lie within the diocese, most are run independently of it. [13]

There are nine Catholic cemeteries serving the diocese; two in Brooklyn, five in Queens and three outside the diocese.

Outside of the Diocese of Brooklyn