From Wikipedia, the free encyclopedia
Archdiocese of the Catholic Church 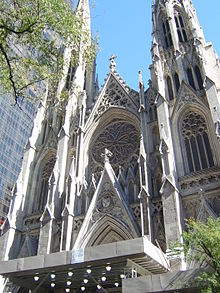 It publishes a bi-weekly newspaper, Catholic New York, the largest of its kind in the United States. [5]

The ordinary of the Archdiocese of New York is an archbishop whose cathedra is The Cathedral of St. Patrick (commonly St. Patrick's Cathedral) in Manhattan, New York. The Archbishop of New York is also the metropolitan of the larger Ecclesiastical Province of New York, which consists of the eight dioceses that comprise the State of New York with the exception of a small portion ( Fishers Island) that belongs to the Province of Hartford. As such, the metropolitan archbishop possesses certain limited authority over the suffragan sees of the province (see ecclesiastical province).

R. Luke Concanen became the first Bishop of the (then) Diocese of New York in 1808. The current archbishop of New York is Timothy Michael Cardinal Dolan.

At the time, there was a dearth of priests to minister to the large territory. The first Catholic Church in New York City was St. Peter's Church on Barclay Street. The land was purchased from Trinity Church with community donations and a gift of 1,000 pieces of silver from King Charles III of Spain. The church was built in the federal style. Among its regular worshippers were Elizabeth Ann Seton and Pierre Toussaint. [7]

The first appointed Bishop of New York could not set sail from Italy due to the Napoleonic blockade, so a Jesuit priest, Anthony Kohlmann, was chosen as administrator pending his arrival. He was instrumental in organizing the diocese and preparing for its original Cathedral of St. Patrick to be built on Mulberry Street. The difficulties faced by Catholics at the time included anti-Catholic bigotry in general and in the New York school system and a strong Nativist movement that sought to keep Catholics out of the country and to prevent those already present from advancing. [6]

On July 19, 1850, the same pope elevated the Diocese of New York to an archdiocese.

On February 16, 1872, the Diocese of Ogdensburg was established.

In 2008, the Archdiocese of New York celebrated its bicentennial anniversary of its establishment as a diocese. To mark the occasion, Pope Benedict XVI visited the archdiocese from April 18 to April 20. During his visit, Benedict visited St. Patrick's Cathedral, The United Nations, Ground Zero, St. Joseph's Parish in Yorkville, St. Joseph's Seminary in Yonkers and celebrated a Mass at Yankee Stadium in The Bronx.

Since the start of the 21st century, The Archdiocese of New York, like other dioceses around the country and the world, has been dealing with a decline in priestly vocations. This has led to a number of parishes being closed and/or merged, and in some cases priests are being asked to take care of multiple parishes at once. [17]

As of 2021, the archdiocese currently has around 30 men enrolled in its priestly formation program. [19]

In 1959, there were 7,913 nuns and sisters ministering in the archdiocese, representing 103 different religious orders.

Anniversaries of significance to the archdiocese

Below is a list of individuals who have led the Archdiocese of New York and its antecedent jurisdictions since its founding. [18] [21]

Further information: List of churches in the Roman Catholic Archdiocese of New York

Further information: List of schools in the Roman Catholic Archdiocese of New York

The headquarters of the archdiocesan school system is in the New York Catholic Center Terrence Cardinal Cooke Building in Midtown Manhattan. [24]

The following cemeteries are under the auspices of Calvary & Allied Cemeteries, Inc.:

Many parishes have their own cemeteries, or their own sections in private cemeteries. An incomplete list of those cemeteries follows:

In August 2018, the archdiocese reported that between 2016 and 2018, its Independent Reconciliation and Compensation Program paid nearly $60 million to 278 victims of sex abuse by clergy. [27] On September 26, 2018, it was reported that the Archdiocese of New York, and the three other dioceses where Theodore McCarrick served as a bishop, were facing an investigation by the United States Conference of Catholic Bishops for McCarrick's alleged sex abuse. [28] On January 28, 2019, the New York state Assembly and Senate passed a law allowing prosecutors to bring criminal charges until a victim turned 28, and permitting victims to sue until age 55. [29] New York Governor Andrew Cuomo signed the bill into law on February 14, 2019. [30]

On April 26, 2019, the Archdiocese released a list of 120 Catholic clergy accused of committing acts of sexual abuse. [31] Some of those on the list, which includes both male and female church workers, have been convicted and many are deceased. [32] The list was accompanied by a letter of apology from Cardinal Timothy Dolan, who asked for forgiveness. [33]

On August 14, 2019, James Grien, who has accused McCarrick of sexually abusing him when McCarrick was an auxiliary bishop of New York, filed a lawsuit against the Archdiocese of New York. [34] [35] In his lawsuit, Grien also stated that McCarrick's status as a friend of his family allowed the former New York Auxiliary Bishop to continue to visit and sexually abuse him after being transferred to New Jersey's Diocese of Metuchen and Archdiocese of Newark. [36]

On September 30, 2019, Dolan released a report written by Barbara S. Jones, a former judge and prosecutor. [37] [38] Her report stated, among other things, that the Archdiocese had completed the process of removing all of its remaining accused clergy from active ministry. [39] [40] [38] In the same report, Jones recommended that the Archdiocese should also hire a sex abuse "czar" to vet all complaints. [41] [40] [38] Jones, who was commissioned by Dolan in 2018 to conduct the review of the church's handling of abuse allegations, [42] also recommended hiring "a compliance officer for the Office of Priest Personnel to monitor its functions and oversee the new document management system". [41] Dolan also backed the Jones Report and stated at a press conference that the archdiocese was expanding its sex abuse policy as well. [38]

On October 10, 2019, it was announced that Pope Francis had accepted the resignation of Bronx-based Auxiliary Bishop John Jenik following an accusation of sex abuse. [43] Appointed Auxiliary Bishop by Pope Francis in 2014, Jenik also served as vicar for the Northwest Bronx, appointed by Dolan's predecessor Edward Egan in 2006. [44] Jenik, who submitted his resignation letter upon turning 75 in March 2019, [43] had stepped out of public ministry in October 2018 after the allegation surfaced. [45]

On July 27, 2020, it was revealed that a Catholic priest who served the Archdiocese of New York in upstate New York's Orange County was named in a new sex abuse lawsuit. [47] In the lawsuit, eight men alleged that longtime Orange County priest George Boxelaar, who is now deceased, sexually abused them when they were children, adding their claims to those of at least three other accusers of the late Boxelaar who have sued. [47] These three other accusers had filed lawsuits through the state Supreme Court in Orange County in late 2019, with one also naming the Archdiocese of New York and both Holy Cross and Our Lady of Mount Carmel churches as defendants. [48] In addition to these new lawsuits, a Scarsdale Catholic school teacher identified as Edwin Gaylor also confessed to committing acts of sex abuse. [49]

On December 3, 2020, New York City priest Fr. George Rutler, the prestigious pastor of the Church of St. Michael in Manhattan was accused by a female security guard, who worked at Rutler's parish for two shifts, of watching pornography and "aggressively" groping her. [50] Rutler, considered a conservative icon,[ by whom?] has made numerous appearances on EWTN and has written 30 books. [51] Following the accusations, he maintained his innocence but offered to temporarily step down as pastor during the subsequent investigation. In May 2021, the District Attorney of Manhattan declined to bring charges, dismissing the accusations and allegedly calling them "baseless." [52] As of December 2021, no charges against Rutler have been announced in New York.