From Wikipedia, the free encyclopedia
(Redirected from Rockumentary)
Audiovisual recording of a concert performance 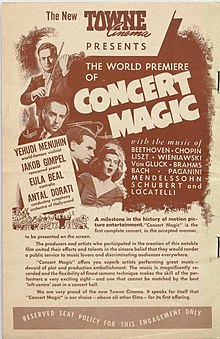 Poster for Concert Magic in 1948 at the Towne Cinema in Toronto, Ontario

The earliest known concert film is the 1948 picture Concert Magic. This concert features virtuoso violinist Yehudi Menuhin (1916–1999) at the Charlie Chaplin Studios in 1947. Together with various artists he performed classical and romantic works of famous composers such as Beethoven, Wieniawski, Bach, Paganini and others.[ citation needed]

One of popular music's most ground-breaking concert films is Pink Floyd: Live at Pompeii (1972), directed by Adrian Maben, in which Pink Floyd perform a short set of songs inside the amphitheatre of Pompeii without an audience (save for the recording crew).

The term was first used by Bill Drake in the 1969 History of Rock & Roll radio broadcast and is a portmanteau of "rock" and "documentary". [5] [6] The term was subsequently used to describe concert films containing appearances by multiple artists. [7] [8] In 1976, the term was used by the promoters of the live musical production Beatlemania which documented the evolving career of The Beatles. [9] The 1984 mockumentary film This Is Spinal Tap notably parodied the rockumentary genre. [10]

Other examples of this type of film include Menudo's 1981's Menudo: La Película and Duran Duran's 1984's Sing Blue Silver. The former mixes a Menudo concert (in Merida, Venezuela) with movie scenes and a plot, while the latter follows Duran Duran as they travel around Canada and the United States doing concerts and actual tourism.