The Rockefeller University is a private biomedical research and graduate-only university in New York City, New York. It focuses primarily on the biological and medical sciences and provides doctoral and postdoctoral education. It is classified among "R2: Doctoral Universities – High research activity." [5] Rockefeller is the oldest biomedical research institute in the United States.

In 2018, the faculty included 82 tenured and tenure-track members, including 37 members of the National Academy of Sciences, 17 members of the National Academy of Medicine, seven Lasker Award recipients, and five Nobel laureates. As of March 2022, a total of 26 Nobel laureates have been affiliated with Rockefeller University. [6]

The university is located on the Upper East Side of Manhattan, between 63rd and 68th streets on York Avenue. Richard P. Lifton became the university's eleventh president on September 1, 2016. The Rockefeller University Press publishes the Journal of Experimental Medicine, the Journal of Cell Biology, and The Journal of General Physiology. 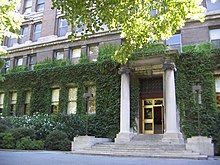 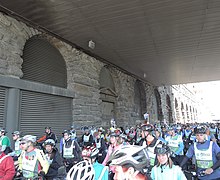 The FDR Drive runs under the campus

The first director of laboratories was Simon Flexner, who supervised the development of research capacity at the institute, whose staff made major discoveries in basic research and medicine. While a student at Johns Hopkins University, Flexner had studied under the institute's first scientific director, William H. Welch, first dean of Hopkins' medical school and known as the dean of American medicine. [8] Flexner retired in 1935 and was succeeded by Herbert Gasser. [10] He was succeeded in 1953 by Detlev Bronk, who broadened The Rockefeller Institute into a university that began awarding the PhD degree in 1954. [8] In 1965 The Rockefeller Institute's name was changed to The Rockefeller University. [8]

For its first six decades, the institute focused on basic research to develop basic science, on applied research as biomedical engineering, and, since 1910—when The Rockefeller Hospital opened on its campus as America's first facility for clinical research—on clinical science. [11] The Rockefeller Hospital's first director Rufus Cole retired in 1937 and was succeeded by Thomas Milton Rivers. [12] As director of The Rockefeller Institute's virology laboratory, he established virology as an independent field apart from bacteriology.

In the 1940s, it hosted a "scientific team that overturned medical dogma" and "became the first to demonstrate that genes were made of DNA." [13]

Rockefeller Sr visited the university just once, at the urging of Rockefeller Jr, who was enthusiastic about the institute. [1]: 475  Rockefeller Jr and his youngest son David visited more often. [14] David Rockefeller joined the board of trustees in 1940, was its chairman from 1950 to 1975, chaired the board's executive committee from 1975 to 1995, became honorary chairman and life trustee, [15] and remained active as a philanthropist until his death. [14]

The archives of Rockefeller University are at the Rockefeller Archive Center, established in 1974 as part of the university and organized as an independent foundation since 2008. [16]

To foster an interdisciplinary atmosphere among its laboratories, faculty members are grouped into one or more of ten interconnecting research areas: [17] [18]

Rockefeller University admitted its first graduate students in 1955. [22] Today, about 255 graduate students are enrolled in the program, which offers doctoral degrees in the biomedical sciences, chemistry, and biophysics. [23] The university's organization on the basis of laboratories rather than a hierarchical departmental structure [24] extends to the graduate program, where laboratory research is the primary focus and students can meet degree requirements by participating in any combination of courses. [23] In partnership with neighboring Memorial Sloan Kettering Cancer Center and Weill Cornell Medicine, Rockefeller participates in the Tri-Institutional MD–PhD Program as well as a Tri-Institutional chemical biology Ph.D. program. [25]

Rockefeller faculty have made contributions to breakthroughs in biomedical sciences. Michael W. Young was one of several scientists who located genes that regulate the sleep–wake cycle in 1984. [27] In 1994, Jeffrey M. Friedman’s laboratory discovered leptin, a gene that influences appetite and weight. [28] Charles David Allis helped identify the first enzyme that modifies histones in 1996, providing early evidence that the DNA packaging material plays a crucial role in gene regulation. [29] In 1998, Roderick MacKinnon’s laboratory elucidated the structure and mechanism of a potassium channel, explaining how electrical signals are conveyed across cell membranes. [30] Titia de Lange was part of a team that found how telomeres protect chromosome ends, shedding light on the role of genome instability in cancer in 1999. [31] Robert B. Darnell led research that defined the molecular basis of fragile X syndrome, the second leading cause of intellectual disability, in 2001. [32] Vincent A. Fischetti was part of a group that developed a powerful agent that can target and wipe out anthrax bacteria in 2002. [33] Charles M. Rice helped produce an infectious form of the hepatitis C virus in laboratory cultures of human cells in 2005, leading directly to three new classes of hepatitis C drugs. [34] Elaine Fuchs helped define the stem cells that can initiate squamous cell carcinoma in 2011, and also characterized the signaling pathways that drive malignancy. [35] In 2013, Leslie B. Vosshall’s laboratory identified a gene in mosquitoes that is responsible for their attraction to humans and their sensitivity to the insect repellent DEET. [36] Ali Brivanlou's laboratory developed a method to grow embryos outside the uterus for up to 13 days in 2016, allowing scientists to study the earliest events of human development. [37]

In 2020, many Rockefeller scientists shifted the focus of their research in response to the COVID-19 pandemic. [38] Michel C. Nussenzweig pioneered a method to isolate and clone antibodies from people who successfully recovered from COVID-19 to design a treatment that prevents people from developing severe disease. [39] Jean-Laurent Casanova identified genetic mutations that are responsible for a subset of unexpectedly severe cases of COVID-19. [40]

Founder's Hall was the first building on Rockefeller's campus, built between 1903 and 1906. [41] It housed the nation's first major biomedical research laboratory and was declared a National Historic Landmark in 1974. [42] Caspary Auditorium, a 40-foot-high, 90-foot round geodesic dome, was built in 1957 and hosts a variety of concert series and lectures. [43] The completion of the Stavros Niarchos Foundation–David Rockefeller River Campus in 2019, built along the East River over FDR Drive, added two acres to Rockefeller's footprint. [44] Rockefeller's campus houses a childcare center for researchers and other university employees. [45]

Graduate students are offered subsidized housing on campus and receive an annual stipend. [23] Student groups include People at Rockefeller Identifying as Sexual/Gender Minorities (PRISM), Women in Science at Rockefeller (WISeR), and the Science and Education Policy Association (SEPA). [46] The student-run publication Natural Selections is produced monthly. [47]

Promotion of women in science and outreach activities 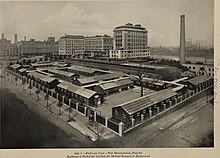 The Rockefeller University established a Women in Science initiative in 1998 to address the underrepresentation of women in the field. [48] It is founded mainly by female philanthropists. [49] The program includes scholarships and an entrepreneurship found to help increase the low number of female researchers that commercialize their discoveries. [50] In 2004 Rockefeller's professor Paul Greengard donated the full amount of his Nobel Prize to establish the Pearl Meister Greengard Prize given annually to a woman scientist in the field of biology.

Rockefeller also host diverse initiatives to promote science and culture: Parents & Science Initiative, [51] The RockEDU Science Outreach for K-12 students and teachers [52] that includes lab experience and professional development and The Lewis Thomas Prize for writing about science is given annually. 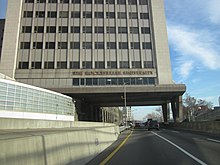 Notable figures to emerge from the institution include Alexis Carrel, Peyton Rous, Hideyo Noguchi, Thomas Milton Rivers, Richard Shope, Thomas Francis Jr, Oswald T. Avery, Frederick Griffith, Colin MacLeod, Maclyn McCarty, Rebecca Lancefield, Wendell Meredith Stanley, René Dubos, Ashton Carter, and Cornelius P. Rhoads. Others attained eminence before being drawn to the university. Joshua Lederberg, who won the Nobel Prize in Physiology or Medicine in 1958, served as president of the university from 1978 to 1990. [56] Paul Nurse, who won the Nobel Prize in Physiology or Medicine in 2001, was president from 2003 to 2010. [57] (Before Nurse's tenure, Thomas Sakmar was acting-president from 2002. [58]) Barry Coller, who invented the Abciximab, currently serves as the Vice President for Medical Affairs. [59] In all, as of October 2020, 38 Nobel Prize recipients have been associated with the university. In the mid-1970s, the university attracted a few prominent academicians in the humanities, such as Saul Kripke.

Reginald Archibald, an endocrinologist at the university from 1948 to 1982, allegedly abused dozens or hundreds of boys during his time at the university while studying growth problems in children, including molestation and photographing them naked. [60] [61] [62] Officials at Rockefeller University knew of the legitimacy of the claims for years before notifying the public. [61] The university and hospital issued a statement confirming that Archibald had "engaged in certain inappropriate conduct during patient examinations" and that they "deeply regret[ted]" any "pain and suffering" the former patients felt. [60] New York State passed a law known as the Child Victims Act, which created a one-year window for civil suits brought by former child victims, allowing them to make cases against the university. [62]