From Wikipedia, the free encyclopedia
Neighborhood of the Bronx in New York City

Riverdale is a residential neighborhood in the northwestern portion of the New York City borough of the Bronx. Riverdale, which had a population of 47,850 as of the 2000 United States Census, contains the city's northernmost point, at the College of Mount Saint Vincent. [3] Riverdale's boundaries are disputed, but it is commonly agreed to be bordered by Yonkers to the north, Van Cortlandt Park and Broadway to the east, the Kingsbridge neighborhood to the southeast, either the Harlem River or the Spuyten Duyvil neighborhood to the south, and the Hudson River to the west. Riverdale Avenue is the primary north–south thoroughfare through Riverdale. [4] [5]

The neighborhood is part of Bronx Community District 8, and its ZIP Codes include 10463 and 10471. The area is patrolled by the 50th Precinct of the New York City Police Department. [1]

Legend states that in 1664, Anthony Van Corlaer (later determined to be a fictional character) died while attempting to swim across the Harlem River from nearby Spuyten Duyvil. [6] In the legend, a witness to Van Corlaer's death stated that "the devil" in the shape of a giant fish swam up and proceeded to "seize the sturdy Anthony by the leg and drag him beneath the waves." This fictional account may be a reference to the earliest recorded shark attack in the New World. [7] In the late 17th century, Frederick Philipse, the lord of Philipse Manor in Westchester County, received permission to construct a bridge across Spuyten Duyvil Creek and charge tolls. "King's Bridge", which was located roughly south of and parallel to where West 230th Street lies today, opened in 1693. [8]

Early in its residential development, Riverdale was a 19th-century estate district where many of Manhattan's moguls built their country estates; for example, in northern Riverdale, what is now Fieldston was part of the estate of Major Joseph Delafield, who purchased 250 acres (100 ha) in 1829, and named it after his family's estate in England. At the turn of the century, the new popularity of railroad commute enabled wealthy businessmen to make Riverdale their year-round residence. Fieldston, owned by a private association, is a particularly intact example of a turn-of-the-century upper-class suburb. The Hudson Hill neighborhood retains many of its historic mansions. Riverdale's elite private schools and historic churches also reflect this past. Development of the neighborhood began in the latter half of the 19th century once the New York Central and Hudson River Railroad came through. [4] The tracks originally crossed Spuyten Duyvil Creek and into Manhattan on the west side, but Cornelius Vanderbilt wanted to consolidate his railroad operations into one terminal. He had tracks laid along the north side of the Harlem River so that trains coming south from Albany could join with the Harlem and New Haven lines and come into Manhattan down the Park Avenue main line, along modern-day Park Avenue, into his new Grand Central Depot. [9] This is the route still used by the Metro-North Railroad's Hudson Line.

The Delafield family laid out lots in Fieldston in 1909 – the year after the IRT Broadway–Seventh Avenue Line (present-day 1 train) was extended to Van Cortlandt Park–242nd Street, intending to develop the land, which at first was called "Delafield Woods". Rather than use a grid plan, civil engineer Albert E. Wheeler, following the suggestions made by Frederick Law Olmsted and James R. Croes in 1876, designed a street plan which followed the contours of the land and preserved as much of the wooded areas as possible. The first house was begun in 1910 and finished in 1911; [4] [10] by the beginning of the 21st century, Fieldston, a privately owned community, was one of the wealthiest neighborhoods in New York City. [11] Leland Weintraub, the commissioner who moved for the district's creation, noted that "most of the features commonly associated with the American romantic suburb of the mid-19th century", including "a picturesque site, landscaping and architecture; connection to the city by accessible transportation and a layout adapted to the topography" are present in the area. [12]

In 1928, Genevieve Ludlow Griscom, who was a member of a small religious group called the Outer Court of the Order of the Living Christ, built a 15,000-square-foot (1,400 m2) mansion at 360 West 253rd Street – also addressed as 5200 Longview Place – for the express purpose of housing Jesus Christ when the Second Coming occurred. After being derelict for a number of years under successive owners, the mansion was bought in 1987 by entrepreneur Jerry Galuten, who renovated it into an even more opulent 17 room home. After being on- and off-the market for eight years, with an asking price as high as $15 million, the house sold in January 2017 for $6.25 million. [13]

As the 20th century progressed, upscale apartment buildings and smaller houses were added to the neighborhood. To this day, Riverdale continues to maintain its character as an affluent enclave in the city of New York. [14] [15] [16] The rich history of Riverdale has led to the creation of the Riverdale Historic District.

In May 2009, the FBI ran a sting operation to prevent a bombing plot in which two Riverdale synagogues were the suggested targets. [17] This followed a Molotov cocktail attack in 2000 on a different Riverdale synagogue [18] [19] and the 1989 firebombing of the Riverdale Press. [20]

On July 26, 2010, the National Weather Service confirmed that an EF1 tornado had hit Riverdale the day before. There were no fatalities, but seven people were injured. [21]

On December 1, 2013, a train derailment near Spuyten Duyvil station resulted in four deaths and over 70 injuries, of which 11 were critical. [22] 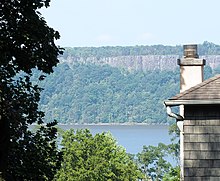 Riverdale covers about 3 square miles (7.8 km2) in area. It has one of the highest elevations in New York City, affording it views of the Empire State Building, George Washington Bridge, Hudson River and New Jersey Palisades. It is also noted for the numerous parks and expanses of greenery and original forest that complement its hilly landscape. The neighborhood is bordered on the north by the city of Yonkers in Westchester County, and on the west by the Hudson River, but its eastern and southern boundaries are frequently disputed. [4] [5] The AIA Guide to New York City gives Broadway as the eastern boundary, and the Harlem River as the southern. [23] There are several long-debated subsections of Riverdale: [5]

Location of Riverdale within the Bronx

The leafy, scenic enclave of Fieldston was designated a historic district by the New York City Landmarks Preservation Commission in 2006. [10] There is also a 15-acre Riverdale Historic District in the northwest of the neighborhood, designated in 1990. [10] 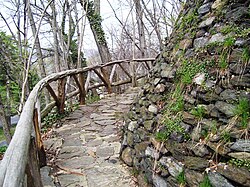 A pathway in Wave Hill

As of 2017, the median household income in Community District 8 was $53,986. [33] In 2018, an estimated 15% of Riverdale residents lived in poverty, compared to 25% in all of the Bronx and 20% in all of New York City. One in eleven residents (9%) were unemployed, compared to 13% in the Bronx and 9% in New York City. Rent burden, or the percentage of residents who have difficulty paying their rent, is 52% in Riverdale, compared to the boroughwide and citywide rates of 58% and 51% respectively. Based on this calculation, as of 2018 [update], Riverdale is considered high-income relative to the rest of the city and not gentrifying. [30]: 7

Riverdale is home to the modernist landmark Saul Victor house, designed by Ferdinand Gottlieb in 1967. Other famous mansions in the Hudson Hill neighborhood include: Greyston (1864), Alderbrook (1880), Stonehurst (1861) and Oaklawn (1863). Since 2005, Central Riverdale has experienced a building boom with the addition of many mid- and high-rise condominium buildings. [34] With a median residence value of $579,196 as of 2013, Riverdale is one of the most expensive neighborhoods in New York City and is considered one of the most sought-after residential neighborhoods. [35]

Before the wider development of Riverdale, housing consisted of large, architecturally distinguished mansions built in the early 20th century, mostly in Georgian- and Tudor-revival styles, which recall scenes of "rural Connecticut" rather than the city. [36] These are mostly concentrated in the Fieldston section of Riverdale, known as the estate area. In addition, more affordable pre-war buildings and smaller houses are scattered throughout Riverdale. The 1950s saw the construction of many low-rise (six-story) brick buildings. By the early to mid-1960s, a number of larger brick towers (10–20 stories) started popping up. Many of these full-service buildings featuring doormen were designed by architect Philip Birnbaum, who designed over 300 buildings in the city, including Skyview, the Windsors, and the Whitehall. [37]

By the 1980s, most of the apartment buildings that were owned by single landlords and rented, were converted into cooperatives. Unlike most of the Bronx, Riverdale is mostly owner-occupied housing. Spuyten Duyvil has the greatest concentration of high rises in Riverdale with the Century, 555 Kappock, and Winston Churchill next to one another. Since 2005, Central Riverdale has experienced a building boom with the addition of many mid- and high-rise condominium buildings that contrast with the older brick style.

In August 2008, Columbia University purchased an almost-completed apartment building near Henry Hudson Parkway for use as faculty housing. This building would go on to be named the Arbor. The Arbor is located at 3260 Henry Hudson Parkway, at the corner of West 235th Street. It houses Columbia students who take classes at the CUIMC, Morningside, or Manhattanville campuses. [39] Students sign one-year leases for apartments that have between one and three bedrooms. [40]

The Arbor Shuttle operates between Morningside, CUIMC, and the Arbor, using cutaway vans. It is billed as the main means of transport between the Arbor and Morningside, but it only operates on weekdays on an hourly schedule. The shuttle formerly also served the 231st Street station, but has since been cut back to only serve the Arbor. [40] [41]

A Pulitzer-Prize-winning weekly newspaper, the Riverdale Press brings news of interest to residents of the neighborhood. 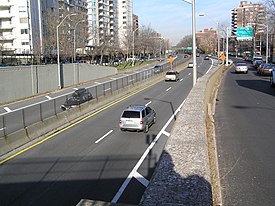 As of 2018 [update], preterm births are slightly more common in Riverdale than in other places citywide, though births to teenage mothers are less common. In Riverdale, there were 89 preterm births per 1,000 live births (compared to 87 per 1,000 citywide), and 13.1 births to teenage mothers per 1,000 live births (compared to 19.3 per 1,000 citywide). [30]: 11  Riverdale has a relatively average population of residents who are uninsured. In 2018, this population of uninsured residents was estimated to be 16%, higher than the citywide rate of 12%. [30]: 14

Riverdale is located within two ZIP Codes. The area north of Manhattan College Parkway and 239th Street is in 10471, while the area south of these two streets is in 10463. While 10471 is entirely in Riverdale, 10463 also covers the adjacent neighborhoods of Kingsbridge, Bronx, and Marble Hill, Manhattan. [57] The United States Postal Service operates three post offices nearby: 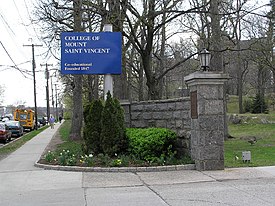 The public schools are a part of the New York City Department of Education. The public elementary schools are the Spuyten Duyvil School (P.S. 24) [61] and the Robert J. Christen School (P.S. 81). [62] There is one zoned public middle and high school in Riverdale: M.S./H.S 141, the Riverdale Kingsbridge Academy. [63] Nearby public high schools that serve the community include the Bronx High School of Science, a specialized high school; [64] John F. Kennedy High School Campus, consisting of four separate high schools; [65] and the IN-Tech Academy MS/HS 368, which also contains a middle school. [66]

An increase in the Jewish population of the neighborhood in the late twentieth century led to Riverdale now being home to top-ranked Jewish day schools, the SAR Academy, an elementary school, and the SAR High School, as well as the Yeshiva of Telshe Alumni, Yeshiva Ohavei Torah, Yeshivat Chovevei Torah and Yeshivat Maharat. Catholic elementary schools in the area are Visitation School, St. Gabriel's School, and St. Margaret of Cortona School, where President John F. Kennedy received his Confirmation. [67] 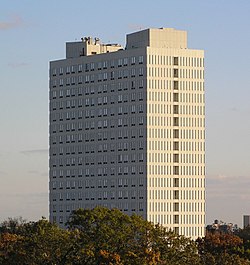 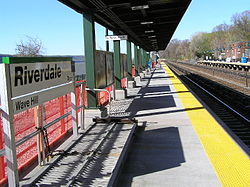 The Riverdale station of the Metro-North Railroad

Riverdale is served by the 1 train of the New York City Subway, at the following stations: [79]

Riverdale is also served by the following Bee-Line Bus System routes, which run to Westchester County: [78] [80]

Metro-North commuter railroad service is available at two stations, both on the Hudson Line: the Spuyten Duyvil station at Edsall Avenue and the Riverdale station between West 254th and 255th Streets. Hudson Rail Link connects the Metro-North stations to the surrounding area, with Routes A, B, C, and D serving Riverdale station, and Routes J, K, L, and M serving Spuyten Duyvil station.

Riverdale has often been cited in literature, film and television. Exteriors of many of Riverdale's locations have been used in both television and movie production.