From Wikipedia, the free encyclopedia
2014–15 concert tour by Judas Priest

The Redeemer of Souls Tour was a worldwide concert tour by English heavy metal band, Judas Priest, which was in support of Redeemer of Souls. It was their first tour since the conclusion of the Epitaph World Tour in 2012, which was originally dubbed as a farewell tour; the band has since retracted that statement.

The 2016 live album, Battle Cry, was released on 25 March of that year, featuring the band's performance recorded at Wacken Open Air on 1 August 2015. 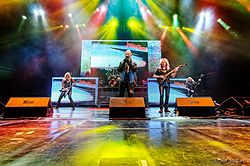 The tour featured material from Redeemer of Souls for the first time. It also coincided with the 30th anniversary of the release of Defenders of the Faith and so the band played a number of songs from that album that hadn't been played since the mid-1980s.

26 February 2015: "The Hellion/Electric Eye" and "Painkiller" were added for the further legs of the tour. Shortly they removed "Defender Of The Faith" from the set. 26 June 2015: "Love Bites" and "March Of The Damned" was removed from the set. 16 October 2015: "Desert Plains", "The Rage" and "Screaming for Vengeance" (not played since 1986) were added, "Devil's Child" and "Jawbreaker" were removed from the set.

For the first American leg, Judas Priest choose glam rock band, Steel Panther, to play with them. Their guitar player, Russ Parrish, had previously worked with Rob Halford in the 1990s in the band Fight.

Other bands that supported Judas Priest include: