From Wikipedia, the free encyclopedia
This article is about the bridge in Tokyo. For other bridges with this name, see Rainbow Bridge (disambiguation).
Suspension bridge in Tokyo, Japan 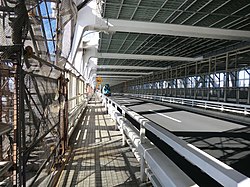 View of the walkway. 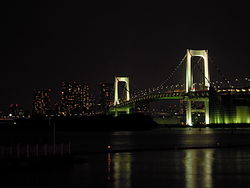 It is named Tōkyō Kō Renrakukyō (東京港連絡橋) as the official name in Japanese.

The towers supporting the bridge are white in color, designed to harmonize with the skyline of central Tokyo seen from Odaiba. There are lamps placed on the wires supporting the bridge, which are illuminated into three different colors, red, white and green every night using solar energy obtained during the day.

The bridge can be accessed by foot from Tamachi Station ( JR East) or Shibaura-futō Station ( Yurikamome) on the mainland side.

The Rainbow Bridge carries three transportation lines on two decks. The upper deck carries the Shuto Expressway's Daiba Route, while the lower deck carries the Yurikamome rapid transit system in the centre, walkways on the outer side, and Tokyo Prefectural Route 482 in-between. Light motorcycles under 50cc are not permitted on either deck or the walkway of the bridge. Motorcycle pillion passengers are also banned.

The bridge has two separate walkways on the north and south sides of the lower deck; the north side offers views of the inner Tokyo harbour and Tokyo Tower, while the south side offers views of Tokyo Bay and occasionally Mount Fuji. The walkways may only be used during certain hours (9 am to 9 pm in the summer; 10 am to 6 pm in the winter, access to the walkways close 30 minutes before closing time.) [6] Bicycles are permitted on the condition that they are pushed (as opposed to riding them).

A panoramic view of Rainbow Bridge and the surrounding Tokyo Bay area as seen from Odaiba during the day.