The Queens Pride Parade and Multicultural Festival is the second oldest and second largest pride parade in New York City. [1] [2] It is held annually in the neighborhood of Jackson Heights, located in the New York City borough of Queens. The parade was founded by Daniel Dromm and Maritza Martinez to raise the visibility of the LGBTQ community in Queens and memorialize Jackson Heights resident Julio Rivera. [3] Queens also serves as the largest transgender hub in the Western hemisphere and is the most ethnically diverse urban area in the world. [4]

The controversy over Children of the Rainbow, along with the murder of Julio Rivera, was Queens’s Stonewall.

Two events spurred the LGTBQ community of Jackson Heights to host its annual pride march: the first was a hate crime; the second, the rejection of a multicultural curriculum by Queens Community School District 24.

On July 2, 1990, Julio Rivera, a 29-year old gay Puerto Rican bartender, was murdered in the schoolyard of P.S. 69 in Jackson Heights. After a night of heavy drinking, three young white men (Erik Brown, Esat Bici, and Daniel Doyle) who were out hunting for "a drug dealer or a drug addict or a homo out cruising," lured Rivera into the schoolyard and punched, clubbed, hammered, and finally stabbed him to death. [6] In response to his murder, Rivera's relatives and friends mobilized New York City's lesbian, gay, bisexual and transgender community, holding a candlelight vigil at the site of the murder and putting pressure on the police department to find his killers. [5]

In 1992, Queens Community School District 24 rejected the Multicultural Children of the Rainbow Curriculum proposed by Chancellor Joseph A. Fernandez of the New York City public school system. Children of the Rainbow was designed to teach children acceptance of New York City's diverse communities, but the president of District 24's board, Mary A. Cummins, called the guide "dangerously misleading lesbian/homosexual propaganda," using three among the hundreds of the recommended readings, Heather Has Two Mommies, Daddy’s Roommate, and Gloria Goes to Gay Pride, as proof. [7] In response, Daniel Dromm, a public school teacher in District 24 Community proposed a family-friendly celebratory parade that would allow the Queens LGBTQ community to become visible. As he explained six years later, “I wanted people to know that lesbians and gay men were their family, friends, and neighbors.” [1]

On June 6, 1993, the Inaugural Queens Lesbian and Gay Parade and Block Party Festival took place in Jackson Heights. Co-organized by Daniel Dromm and Cuban-born LGBTQ rights activist Maritza Martinez, it became the first successful event to be organized in any New York City borough outside Manhattan. Some 1,000 marchers participated, and thousands of spectators attended. More than a dozen LGBTQ organizations sponsored the event. City Councilman Tom Duane, Assemblywoman Deborah Glick, and activist Jeanne Manford served as Grand Marshals. A mostly local affair, the march included two separate moments of silence. At 1:25pm, the Grand Marshals of the parade called for moment of silence in front of P.S. 69 to memorialize Julio Rivera and all victims of lesbian/gay bashings. Then at 3:00pm, a second moment of silence was taken during the music festival to remember those who had died of AIDS. [8] 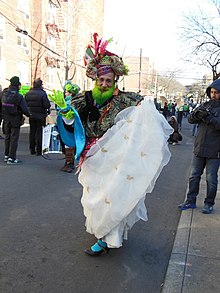 Now an annual tradition, Queens Pride has attracted crowds of over 40,000 people, and is supported by politicians and sponsors such as the Queens Library, Uber, Go Magazine, Gaytravel.com, AIDS Center of Queens County, Gay City News, and Ibis Styles Hotels. [10]

One iconic Queens Pride participant was Ms. Colombia, who Daniel Dromm characterized as "a real Jackson Heights character." A profile from the arts organization Visual AIDS describes her as being a "colorful and beloved performance artist." [11] Born José Oswaldo Gómez, Ms. Colombia moved from Medellín to the United States in search for safety, as individuals who did not dress in gender specific ways were common targets for hate crimes in Colombia. [12] After being diagnosed with HIV in the 1980s, Gómez determined to live "day by day," becoming Ms. Colombia, whose colorful dressing and parade-walking became a celebration of being alive. [13] On October 4, 2018, New York City officials mourned her passing. [14] [15]

Crowd at the Multicultural Festival after the 2018 Queens Pride Parade 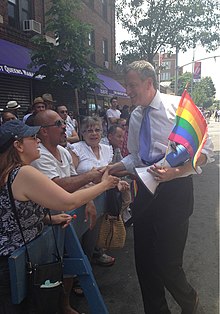