Queen of the Night aria

From Wikipedia, the free encyclopedia
Aria from The Magic Flute 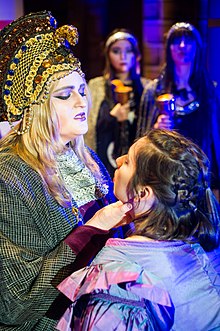 From a production of The Magic Flute at Texas A&M University–Commerce: the Queen of the Night menaces the terrified Pamina.

"Der Hölle Rache kocht in meinem Herzen" ("Hell's vengeance boils in my heart"), commonly abbreviated "Der Hölle Rache", is an aria sung by the Queen of the Night, a coloratura soprano part, in the second act of Mozart's opera The Magic Flute (Die Zauberflöte). It depicts a fit of vengeful rage in which the Queen of the Night places a knife into the hand of her daughter Pamina and exhorts her to assassinate Sarastro, the Queen's rival, else she will disown and curse Pamina.

Memorable with its upper register staccatos, the fast-paced and menacingly grandiose "Der Hölle Rache" is one of the most famous of all opera arias. This rage aria is often referred to as the Queen of the Night Aria, although the Queen sings another distinguished aria earlier in the opera, " O zittre nicht, mein lieber Sohn".

The German libretto of The Magic Flute was written by Emanuel Schikaneder, who also led the theatre troupe that premiered the work and created the role of Papageno.

Hell's vengeance boils in my heart,
Death and despair blaze about me!
If Sarastro doesn't feel the pain of death through you,
Then you will not be my daughter anymore:

If not through you Sarastro will turn pale!
Hear, gods of revenge, hear the mother's oath!

Beginning of the first coloratura passage

The aria is written in D minor, and is scored for pairs of flutes, oboes, bassoons, horns, and trumpets, along with timpani and the string section. This is a larger orchestra than for "O zittre nicht" and comprises all the players from the opera as a whole, except the clarinets and trombones.

The aria is renowned as a demanding piece to perform well. The vocal range covers two octaves, from F4 to F6 and requires a very high tessitura, A4 to C6. [2]

Thomas Bauman has expressed particular admiration for one moment in the score. At the climax of the aria, the Queen sings the words "Hört, hört, hört!" solo, in alternation with loud chords from the orchestra. The first two syllables are sung to D and F, suggesting to the listener a third one on A, completing the D minor triad. But, as Bauman writes:

Mozart's masterstroke is the transformation he brought about by moving from the third degree to the flat sixth rather than to the fifth. ... No matter how often one hears this passage ... one is led by musical logic to expect, after D and F, A. But the Queen sings a terrifying B♭ instead. [3]

The effect is accompanied by unexpected Neapolitan harmony in the orchestra, with all the violins playing in unison high on the G string to intensify the sound. [4] 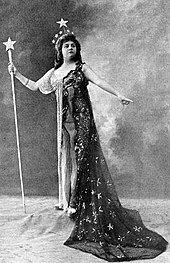 Alice Verlet as Queen of the Night, 1912

The first singer to perform the aria onstage was Mozart's sister-in-law Josepha Hofer, who at the time was 32. By all accounts, Hofer had an extraordinary upper register and an agile voice and apparently Mozart, being familiar with Hofer's vocal ability, wrote the two blockbuster arias to showcase it.

An anecdote from Mozart's time suggests that the composer himself was very impressed with his sister-in-law's performance. The story comes from an 1840 letter from composer Ignaz von Seyfried, and relates an event from the last night of Mozart's life—4 December 1791, five weeks into the opera's initial (very successful) run. According to Seyfried, the dying Mozart whispered the following to his wife Constanze:

In modern times a number of notable sopranos have performed or recorded the aria. June Anderson sings it in the film Amadeus. The aria was also a favourite of the amateur soprano Florence Foster Jenkins.

A recording of the aria by Edda Moser, accompanied by the Bavarian State Opera under the baton of Wolfgang Sawallisch, is included in a collection of music from Earth on the Voyager 1 and Voyager 2 spacecraft. [6]