From Wikipedia, the free encyclopedia
Award for achievements in journalism, literature, and musical composition within the United States
Award

The Pulitzer Prize ( /ˈpʊlɪtsər/ [1]) is an award for achievements in newspaper, magazine, online journalism, literature, and musical composition within the United States. It was established in 1917 by provisions in the will of Joseph Pulitzer, who had made his fortune as a newspaper publisher, and is administered by Columbia University. [2] Prizes are awarded annually in twenty-one categories. In twenty of the categories, each winner receives a certificate and a US$15,000 cash award (raised from $10,000 in 2017). [3] The winner in the public service category is awarded a gold medal. [4] [5] 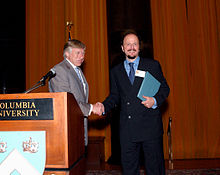 The Pulitzer Prize does not automatically consider all applicable works in the media, but only those that have specifically been entered. (There is a $75 entry fee, for each desired entry category.) Entries must fit in at least one of the specific prize categories, and cannot simply gain entrance for being literary or musical. Works can also be entered only in a maximum of two categories, regardless of their properties. [6]

Each year, more than 100 jurors are selected by the Pulitzer Prize Board to serve on 22 separate juries for the 23 award categories; one jury makes recommendations for both photography awards. Most juries consist of five members, except for those for Public Service, Investigative Reporting, Explanatory Reporting, Feature Writing, Commentary and Audio Reporting categories, which have seven members; however, all book juries have five members. [2] For each award category, a jury makes three nominations. The board selects the winner by majority vote from the nominations, or bypasses the nominations and selects a different entry following a 75 percent majority vote. The board can also vote to issue no award. The board and journalism jurors are not paid for their work; however, the jurors in letters, music, and drama receive honoraria for the year. [2]

Difference between entrants and nominated finalists

Anyone whose work has been submitted is called an entrant. The jury selects a group of nominated finalists and announces them, together with the winner for each category. However, some journalists and authors who were only submitted, but not nominated as finalists, still claim to be Pulitzer nominees in promotional material.

Bill Dedman of NBC News, the recipient of the 1989 investigative reporting prize, pointed out in 2012 that financial journalist Betty Liu was described as "Pulitzer Prize–Nominated" in her Bloomberg Television advertising and the jacket of her book, while National Review writer Jonah Goldberg made similar claims of "Pulitzer nomination" to promote his books. Dedman wrote, "To call that submission a Pulitzer 'nomination' is like saying that Adam Sandler is an Oscar nominee if Columbia Pictures enters That's My Boy in the Academy Awards. Many readers realize that the Oscars don't work that way—the studios don't pick the nominees. It's just a way of slipping 'Academy Awards' into a bio. The Pulitzers also don't work that way, but fewer people know that." [8]

Nominally, the Pulitzer Prize for Public Service is awarded only to news organizations, not individuals. In rare instances, contributors to the entry are singled out in the citation in a manner analogous to individual winners. [9] [10] Journalism awards may be awarded to individuals or newspapers or newspaper staffs; infrequently, staff Prize citations also distinguish the work of prominent contributors. [11]

The Pulitzer Prize certificate of Mihajlo Pupin, which used a recycled Columbia diploma

Newspaper publisher Joseph Pulitzer gave money in his will to Columbia University to launch a journalism school and establish the Pulitzer Prize. It allocated $250,000 to the prize and scholarships. [12] He specified "four awards in journalism, four in letters and drama, one in education, and four traveling scholarships." [2] After his death on October 29, 1911, the first Pulitzer Prizes were awarded June 4, 1917 (they are now announced in April). The Chicago Tribune under the control of Colonel Robert R. McCormick felt that the Pulitzer Prize was nothing more than a 'mutual admiration society' and not to be taken seriously; the paper refused to compete for the prize during McCormick's tenure up until 1961. [13] [14] Until 1975, the prizes were overseen by the trustees of Columbia University.

Awards are made in categories relating to journalism, arts, letters and fiction. Reports and photographs by United States–based newspapers, magazines and news organizations (including news websites) that "[publish] regularly" [15] are eligible for the journalism prize. Beginning in 2007, "an assortment of online elements will be permitted in all journalism categories except for the competition's two photography categories, which will continue to restrict entries to still images." [16] In December 2008, it was announced that for the first time content published in online-only news sources would be considered. [17]

Although certain winners with magazine affiliations (most notably Moneta Sleet Jr.) were allowed to enter the competition due to eligible partnerships or concurrent publication of their work in newspapers, the Pulitzer Prize Advisory Board and the Pulitzer Prize Board historically resisted the admission of magazines into the competition, resulting in the formation of the National Magazine Awards at the Columbia Journalism School in 1966.

In 2015, magazines were allowed to enter for the first time in two categories (Investigative Reporting and Feature Writing). By 2016, this provision had expanded to three additional categories ( International Reporting, Criticism and Editorial Cartooning). [18] That year, Kathryn Schulz (Feature Writing) and Emily Nussbaum (Criticism) of The New Yorker became the first magazine affiliates to receive the prize under the expanded eligibility criterion. [19]

In October 2016, magazine eligibility was extended to all journalism categories. [20] Hitherto confined to the local reporting of breaking news, the Breaking News Reporting category was expanded to encompass all domestic breaking news events in 2017. [21]

Definitions of Pulitzer Prize categories as presented in the December 2017 Plan of Award: [22]

There are six categories in letters and drama:

In 2020, the Audio Reporting category was added. The first prize in this category was awarded to "The Out Crowd", an episode of the public radio program This American Life. In the second year, the Pulitzer was awarded for the NPR podcast No Compromise.[ citation needed]

There is one prize given for music:

There have been dozens of Special Citations and Awards: more than ten each in Arts, Journalism, and Letters, and five for Pulitzer Prize service, most recently to Joseph Pulitzer, Jr. in 1987.

In addition to the prizes, Pulitzer Travelling Fellowships are awarded to four outstanding students of the Graduate School of Journalism as selected by the faculty.

An example of a writing field that has been expanded was the former Pulitzer Prize for the Novel (awarded 1918–1947), which has been changed to the Pulitzer Prize for Fiction, which also includes short stories, novellas, novelettes, and poetry, as well as novels. 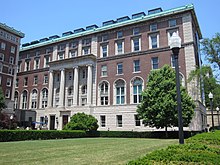 Pulitzer Hall on the Columbia campus

The 19-member Pulitzer Prize Board [23] convenes semi-annually, traditionally in the Joseph Pulitzer World Room at Columbia University's Pulitzer Hall. It comprises major editors, columnists and media executives in addition to six members drawn from academia and the arts, including the president of Columbia University, the dean of the Columbia University Graduate School of Journalism and the administrator of the prizes, who serves as the Board's secretary. The administrator and the dean (who served on the Board from its inception until 1954 and beginning again in 1976) participate in the deliberations as ex officio members, but cannot vote. Aside from the president and dean (who serve as permanent members for the duration of their respective appointments) and the administrator (who is re-elected annually), the Board elects its own members for a three-year term; members may serve a maximum of three terms. Members of the Board and the juries are selected with close attention "given to professional excellence and affiliation, as well as diversity in terms of gender, ethnic background, geographical distribution and size of news organization."

Former Associated Press and Los Angeles Times editor Marjorie Miller was named administrator in April 2022. [24] She succeeded former New York Times senior editor Dana Canedy, who served in the role from 2017 to 2020. Canedy was the first woman and first person of color to hold the position. [25] [26] Edward Kliment, the program's longtime deputy administrator, was appointed acting administrator in July 2020 when Canedy became senior vice president and publisher of Simon & Schuster's flagship eponymous imprint. [27] He chose not to contend for the position and returned to his previous role upon Miller's appointment. [28]

In addition to Canedy, past administrators include John Hohenberg (the youngest person to hold the position to date; 1954–1976), fellow Graduate School of Journalism professor Richard T. Baker (1976–1981), former Newsweek executive editor Robert Christopher (1981–1992), former New York Times managing editor Seymour Topping (1993–2002), former Milwaukee Journal editor Sig Gissler (2002–2014) and former Concord Monitor editor Mike Pride (the only former board member to hold the position to date; 2014–2017). Prior to the installation of Hohenberg, the program was jointly administered by members of the Journalism School's faculty (most notably longtime dean Carl W. Ackerman) and officials in Columbia's central administration under the aegis of Frank D. Fackenthal.

Following the retirement of Joseph Pulitzer Jr. (a grandson of the endower who served as permanent chair of the board for 31 years) in 1986, the chair has typically rotated to the most senior member (or members, in the case of concurrent elections) on an annual basis. [29]

Since 1975, the Board has made all prize decisions; prior to this point, the Board's recommendations were ratified by a majority vote of the trustees of Columbia University. [2] Although the administrator's office and staff are housed alongside the Graduate School of Journalism at Columbia's Pulitzer Hall and several administrators have held concurrent full-time or adjunct faculty appointments at the Journalism School, the Board and administration have been operationally separate from the School since 1950. [30]: 121

A 2012 academic study by journalism professors Yong Volz of the University of Missouri and Francis Lee of the Chinese University of Hong Kong found "that only 27% of Pulitzer winners since 1991 were females, while newsrooms are about 33% female." [61] The researchers concluded female winners were more likely to have traditional academic experience, such as attendance at Ivy League schools, metropolitan upbringing, or employment with an elite publication such as The New York Times. The findings suggest a higher level of training and connectedness are required for a female applicant to be awarded the prize, compared to male counterparts. [62]