From Wikipedia, the free encyclopedia
Wikipedia portal for content related to Cities 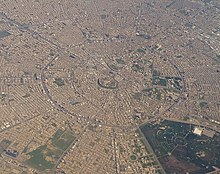 The city of Erbil in Kurdistan has a radial urban structure centred on an ancient fortress.
Shortcut

A city is a human settlement of notable size. It can be defined as a permanent and densely settled place with administratively defined boundaries whose members work primarily on non-agricultural tasks. Cities generally have extensive systems for housing, transportation, sanitation, utilities, land use, production of goods, and communication. Their density facilitates interaction between people, government organisations and businesses, sometimes benefiting different parties in the process, such as improving efficiency of goods and service distribution.

Historically, city-dwellers have been a small proportion of humanity overall, but following two centuries of unprecedented and rapid urbanization, more than half of the world population now lives in cities, which has had profound consequences for global sustainability. Present-day cities usually form the core of larger metropolitan areas and urban areas—creating numerous commuters traveling towards city centres for employment, entertainment, and education. However, in a world of intensifying globalization, all cities are to varying degrees also connected globally beyond these regions. This increased influence means that cities also have significant influences on global issues, such as sustainable development, global warming, and global health. Because of these major influences on global issues, the international community has prioritized investment in sustainable cities through Sustainable Development Goal 11. Due to the efficiency of transportation and the smaller land consumption, dense cities hold the potential to have a smaller ecological footprint per inhabitant than more sparsely populated areas. Therefore, compact cities are often referred to as a crucial element of fighting climate change. However, this concentration can also have significant negative consequences, such as forming urban heat islands, concentrating pollution, and stressing water supplies and other resources. ( Full article...)

Refresh with new selections below (purge)

listen), sometimes spelled Erevan) is the capital and largest city of Armenia and one of the world's oldest continuously inhabited cities. Situated along the Hrazdan River, Yerevan is the administrative, cultural, and industrial center of the country, as its primate city. It has been the capital since 1918, the fourteenth in the history of Armenia and the seventh located in or around the Ararat Plain. The city also serves as the seat of the Araratian Pontifical Diocese, which is the largest diocese of the Armenian Apostolic Church and one of the oldest dioceses in the world.

The history of Yerevan dates back to the 8th century BCE, with the founding of the fortress of Erebuni in 782 BCE by King Argishti I of Urartu at the western extreme of the Ararat Plain. Erebuni was "designed as a great administrative and religious centre, a fully royal capital." By the late ancient Armenian Kingdom, new capital cities were established and Yerevan declined in importance. Under Iranian and Russian rule, it was the center of the Erivan Khanate from 1736 to 1828 and the Erivan Governorate from 1850 to 1917, respectively. After World War I, Yerevan became the capital of the First Republic of Armenia as thousands of survivors of the Armenian genocide in the Ottoman Empire arrived in the area. The city expanded rapidly during the 20th century while Armenia was a part of the Soviet Union. In a few decades, Yerevan was transformed from a provincial town within the Russian Empire to Armenia's principal cultural, artistic, and industrial center, as well as becoming the seat of national government. ( Full article...)

Did you know - Show different entries

Darjeeling ( /dɑːrˈdʒiːlɪŋ/, Bengali:  [ˈdarˌdʒiliŋ], Nepali:  [darˈd͡ziliŋ]) is a town and municipality in the northernmost region of the Indian state of West Bengal. Located in the Eastern Himalayas, it has an average elevation of 2,045 metres (6,709 ft). To the west of Darjeeling lies the easternmost province of Nepal, to the east the Kingdom of Bhutan, to the north the Indian state of Sikkim, and farther north the Tibet Autonomous Region region of China. Bangladesh lies to the south and southeast, and most of the state of West Bengal lies to the south and southwest, connected to the Darjeeling region by a narrow tract. Kangchenjunga, the world's third-highest mountain, rises to the north and is prominently visible on clear days.

In the early 19th century, during East India Company rule in India, Darjeeling was identified as a potential summer retreat for British officials, soldiers and their families. The narrow mountain ridge was leased from the Kingdom of Sikkim, and eventually annexed to British India. Experimentation with growing tea on the slopes below Darjeeling was highly successful. Thousands of labourers were recruited chiefly from Nepal to clear the forests, build European-style cottages and work in the tea plantations. The widespread deforestation displaced the indigenous peoples. Residential schools were established in and around Darjeeling for the education of children of the domiciled British in India. By the late-19th century, a novel narrow-gauge mountain railway, the Darjeeling Himalayan Railway, was bringing summer residents into the town and carrying a freight of tea out for export to the world. After India's independence in 1947, as the British left Darjeeling, its cottages were purchased by wealthy Indians from the plains and its tea plantations by out-of-town Indian business owners and conglomerates. ( Full article...) 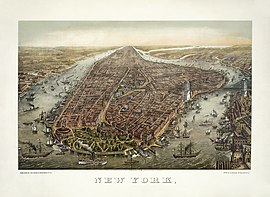 Manhattan in 1873, looking north. The Hudson River is at left. The Brooklyn Bridge across the East River (at right) was built from 1870 to 1883.

The written history of New York City began with the first European explorer, the Italian Giovanni da Verrazzano in 1524. European settlement began with the Dutch in 1608.

The " Sons of Liberty" campaigned against British authority in New York City, and the Stamp Act Congress of representatives from throughout the Thirteen Colonies met in the city in 1765 to organize resistance to Crown policies. The city's strategic location and status as a major seaport made it the prime target for British seizure in 1776. General George Washington lost a series of battles from which he narrowly escaped (with the notable exception of the Battle of Harlem Heights, his first victory of the war), and the British Army occupied New York and made it their base on the continent until late 1783, attracting Loyalist refugees. ( Full article...)