From Wikipedia, the free encyclopedia
This article is about the mammal. For other uses, see Porcupine (disambiguation).
Rodent with a coat of sharp spines

Porcupines are large rodents with coats of sharp spines, or quills, that protect them against predation. The term covers two families of animals: the Old World porcupines of family Hystricidae, and the New World porcupines of family Erethizontidae. Both families belong to the infraorder Hystricognathi within the profoundly diverse order Rodentia and display superficially similar coats of quills. Despite this, the two groups are distinct from one another and are not closely related to each other within the Hystricognathi. The largest species of porcupine is the third-largest living rodent in the world after the capybara and beaver.

The Old World porcupines live in Southern Europe, Asia (western [1] and southern), and most of Africa. They are large, terrestrial, and strictly nocturnal. In taxonomic terms, they form the family Hystricidae.

The New World porcupines are indigenous to North America and northern South America. They live in wooded areas and can climb trees, where some species spend their entire lives. They are less strictly nocturnal than their Old World counterparts, and generally smaller. In taxonomic terms, they form the family Erethizontidae.

Most porcupines are about 60–90 cm (25–36 in) long, with a 20–25 cm (8–10 in) long tail. Weighing 5–16 kg (12–35 lb), they are rounded, large, and slow, and use an aposematic strategy of defence. Porcupines' colouration consists of various shades of brown, grey and white. Porcupines' spiny protection resembles that of the unrelated erinaceomorph hedgehogs and Australian monotreme echidnas as well as tenrecid tenrecs.

Fossils belonging to the genus Hystrix date back to the late Miocene of the continent of Africa. [5] 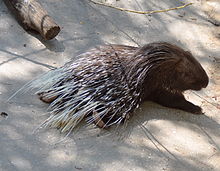 A porcupine is any of 58 species of rodents belonging to the families Erethizontidae (genera: Coendou, Erethizon, and Chaetomys) or Hystricidae (genera: Atherurus, Hystrix, and Trichys). Porcupines vary in size considerably: Rothschild's porcupine of South America weighs less than a kilogram (2.2 lb); the crested porcupine found in Italy, North Africa, and sub-Saharan Africa can grow to well over 27 kg (60 lb). The two families of porcupines are quite different, and although both belong to the Hystricognathi branch of the vast order Rodentia, they are not closely related.

The 11 Old World porcupines tend to be fairly large, and have spines grouped in clusters.

The two subfamilies of New World porcupines are mostly smaller (although the North American porcupine reaches about 85 cm or 33 in in length and 18 kg or 40 lb), have their quills attached singly rather than grouped in clusters, and are excellent climbers, spending much of their time in trees. The New World porcupines evolved their spines independently (through convergent evolution) and are more closely related to several other families of rodents than they are to the Old World porcupines.[ citation needed]

Porcupines have a relatively high longevity and have held the record for being the longest-living rodent, with one individual living to 27 years, [6] until the record was broken in 2002 by a naked mole-rat living to 28 years. [7]

The North American porcupine is a herbivore; it eats leaves, herbs, twigs, and green plants such as clover. In the winter, it may eat bark. It often climbs trees to find food. [8]

The African porcupine is not a climber and forages on the ground. [8] It is mostly nocturnal, [9] but will sometimes forage for food in the day, eating bark, roots, fruits and berries, as well as farm crops. Porcupines have become a pest in Kenya and are eaten as a delicacy. [10]

Defensive behaviour displays in a porcupine depend on sight, scent and sound. Often, these displays are shown when a porcupine becomes agitated or annoyed. There are four main displays seen in a porcupine which are quill erection, teeth clattering, emitting of odour, and attack. [11] These displays are ranked from least aggressive to most aggressive respectively. A porcupine's colouring aids in part of its defence as most of the predators are nocturnal and colour blind. A porcupine's markings are black and white. The dark body and coarse hair of the porcupine are a dark brown/black and when quills are raised, present a white strip down its back mimicking the look of a skunk. This, along with the raising of the sharp quills, deters predators. Along with the raising of the quills, porcupines clatter their teeth causing warning noise to let predators know not to come closer. The incisors vibrate against each other, the strike zone shifts back and the cheek teeth clatter. This behaviour is often paired with body shivering which is used to further display the dangerous quills. [11] The rattling of quills is aided by the hollow quills at the back end of the porcupine. [12] The use of odor is when the sight and sound have failed. An invasive scent is produced from the skin above the tail in times of stress, and is often seen with quill erection. [13] If the above processes fail, the porcupine will attack by running sideways or backwards into predators. A porcupine's tail is also able to swing in the direction of the predator. If contact is made, the quills could be impaled into the predator causing injury or death. [14]

Quills grow in varying lengths and colours, depending on the animal's age and species.

Porcupines' quills, or spines, take on various forms, depending on the species, but all are modified hairs coated with thick plates of keratin, [15] and embedded in the skin musculature. Old World porcupines have quills embedded in clusters, whereas in New World porcupines, single quills are interspersed with bristles, underfur, and hair.

Quills are released by contact or may drop out when the porcupine shakes its body. New quills grow to replace lost ones. [15] [16] Porcupines were long believed to have the ability to project their quills to a considerable distance at an enemy, but this has since been proven to be untrue. [17] [18] 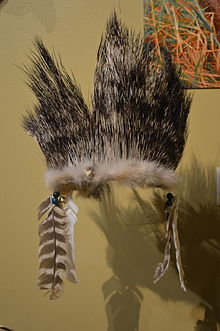 Porcupines are seldom eaten in Western culture, but are very popular in Southeast Asia, particularly Vietnam, where the prominent use of them as a food source has contributed to significant declines in their populations. [19] [20] [21]

More commonly, their quills and guardhairs are used for traditional decorative clothing. For example, their guardhairs are used in the creation of the Native American "porky roach" headdress. The main quills may be dyed, and then applied in combination with thread to embellish leather accessories such as knife sheaths and leather bags. Lakota women would harvest the quills for quillwork by throwing a blanket over a porcupine and retrieving the quills it left stuck in the blanket. [22]

The presence of barbs, acting like anchors, makes it more painful to remove a quill that has pierced the skin. [15] The shape of the barbs makes the quills more effective, both for penetrating the skin and remaining in place. [23] The quills have inspired research for such applications as the design of hypodermic needles and surgical staples. [23] [24] As opposed to the current design for surgical staples, the porcupine quill and barb design would allow for easy and painless insertion as the staple would stay in the skin using the anchored barb design rather than being bent under the skin like traditional staples. [24]

The porcupine is often used as a symbol of American Libertarianism due to its natural embodiment of defensiveness and the non-aggression principle. [25] 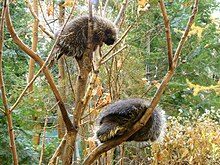 A pair of North American porcupines in their habitat in Quebec

Porcupines occupy a small range of habitats in tropical and temperate parts of Asia, Southern Europe, Africa, and North and South America. They live in forests and deserts, rocky outcrops, and hillsides. Some New World porcupines live in trees, but Old World porcupines prefer a rocky environment. Porcupines can be found on rocky areas up to 3,700 m (12,100 ft) high. They are generally nocturnal, but are occasionally active during daylight.

Hunting porcupine near the town of Cassem, in a miniature from The Book of Wonders by Italian explorer Marco Polo (first book, manuscript 2810)