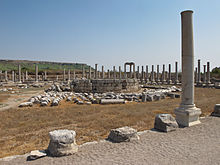 Perga or Perge ( Greek: Πέργη Perge, Turkish: Perge) was an ancient Greek city in Anatolia, [1] once the capital of Pamphylia Secunda, now in Antalya Province on the southwestern Mediterranean coast of Turkey.

Today it is a large site of ancient ruins 15 kilometres (9.3 mi) east of Antalya.

A unique and prominent feature for a Roman city was the long central water channel in the centre of the main street which contained a series of cascading pools and which would have been remarkable even today in a semi-arid area where summer temperatures reach over 30 deg. C. 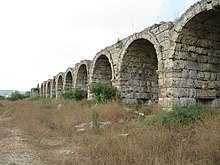 Perge was situated on the coastal plain between the Rivers Catarrhactes (Düden Nehri) and Cestrus (Aksu), about 11 km from the mouth of the latter. [2] [3] [4] [5]

Excavations in the original settlement on the acropolis date it to the early Bronze Age, 4000-3000 BC. [6]

From a bronze tablet discovered in 1986 in Hattusas, a treaty between the Hittite Great King Tudhaliya IV and his vassal, the king of Tarhuntassa, defined the latter's western border at the city "Parha" and the "Kastaraya River". [7] The river is assumed to be the classical Cestrus. West of Parha were the "Lukka Lands". [8] Parha likely spoke a late Luwian dialect like Lycian and that of the neo-Hittite kingdoms.

The settlement probably became a Greek colony of Rhodes in the 7th c. BC. Perge was later a Pamphylian Greek city, and came under successive rule by Persians, Athenians, and Persians again. Alexander the Great, after quitting Phaselis, occupied Perge with a part of his army in 334 BC. Alexander's rule was followed by the Diadochi empire of the Seleucids. The walls around the lower city were built in this period starting from 223 BC. In the 2nd c. BC the city became prosperous and started minting its own coins with the image of Artemis and her temple. [9] Perge became renowned for the worship of Artemis, whose temple stood on a hill outside the town, and in whose honour annual festivals were celebrated. [10] [11] [12] [13]

The region was conquered by the Romans in 188 BC. After 25 BC, the Romans built the Via Sebaste linking Pisidian Antioch in Galatia with Perge.

Under the Romans from the 1st to the 3rd century AD the town became a magnificent city with many impressive buildings. It became one of the most beautiful towns in Anatolia, competing with Side for the status of most important town in Pamphylia. Plancia Magna (d. 122), daughter of the governor Marcus Plancius Varus, was the greatest benefactor and instigator of public buildings and was honoured with statues erected by the town council. She was also a priestess at the Artemis Temple and high priestess at the imperial cult.

In 46 AD, according to the Acts of the Apostles, St. Paul journeyed to Perga, from there continued on to Antiocheia in Pisidia, then returned to Perga where he preached the word of God (Acts 14:25). Then he left the city and went to Attaleia. [14]

As the Cestrus silted up over the late Roman era, Perga declined as a secular city. [15] In the first half of the 4th century, during the reign of Constantine the Great (324-337), Perga became an important centre of Christianity, which soon became the official religion of the Roman Empire. The city retained its status as a Christian centre in the 5th and 6th centuries.

St. Paul the Apostle and his, companion St. Barnabas, twice visited Perga as recorded in the biblical book, the Acts of the Apostles, [16] during their first missionary journey, where they "preached the word" [17] before heading for and sailing from Attalia (modern-day Antalya city), 15 kilometres (9.3 mi) to the southwest, to Antioch.

Paul and Barnabas came to Perge during their first missionary journey, but probably stayed there only a short time, and do not seem to have preached there; [18] [19] it was there that John Mark left Paul to return to Jerusalem. On his return from Pisidia, Paul preached at Perge. [20] [19]

St. Matrona of Perge of the 6th century was a female saint known for temporarily cross-dressing to avoid her abusive husband. [21] She also is known for opposing the Monophysite policy of the emperor Anastasios I. [22] Matrona hid in the monastery of St. Bassion as the enuch Babylos. Once revealed, she was sent to a woman's monastery where she was head of the convent. She was famous for her miraculous gift of healing. She went on to found a nunnery in Constantinople. St Matrona died at the age of 100. Her life was told through a vita prima whose author and exact time period remains a mystery. [23]

No longer a residential, the bishopric is included in the Catholic Church's list of titular sees. [26]

Perga remained inhabited until the foundation of the Seljuk Empire in roughly 1000. [15]

Excavations started in 1946 and have uncovered many monumental buildings: a theatre, a stadium, palaestra, a temple of Artemis and two churches. The temple of Artemis was located outside the town. [19] Many of the coins struck in the city portrayed both the goddess and her sanctuary. [27]

The Hellenistic walls date from the 3rd c. BC and had 3 gates. The south gate is particularly monumental and includes 2 towers 3 storeys high with conical roofs and a horseshoe-shaped square behind. Under Hadrian in 121 AD, a triumphal arch was inserted into the northern wall of the courtyard and the facades were covered in precious marbles and decorated with columns and statues.

One of the most impressive monuments is the theatre which lies outside the walls near the stadium. It is larger than those of Myra and Patara.

The south baths created in the 1st c. AD is one of the best preserved buildings and is noteworthy for its size and monumentality, and for the large collection of sculptures found there.

Perge has been dubbed as “Turkey’s second Zeugma” for the alluring appearance of the mosaics that have been unearthed so far. In 2003 archaeologists discovered well-preserved Greek mosaics showing Oceanus and Medusa. In 2017 a mosaic depicting the sacrifice of Iphigenia was discovered. [28] [27]

The city was eventually supplied in the Roman era by 2 aqueducts. [29] The Kursunlu aqueduct was 11 km long and probably built to supply baths from close to the Kursunlu waterfall. A later aqueduct of 21 km length used a greater flow from the Duden river near the Dudenbasi waterfall. [30]

Perge had at least 6 nymphaea, the most striking being the northern, or "Hadrian's", nymphaeum (about 122 AD) and the southern nymphaeum in the square of Septimius Severus (end 2nd to early 3rd c. AD). Hadrian's nymphaeum was beautifully decorated with numerous sculptures including the river god Cestrus under whom water cascaded. It is located at the edge of the acropolis to capture the outflow of the abundant water supply and from there fed the channel that flowed through the city. The southern nymphaeum faces the courtyard of Septimius Severus and is next to the propylon (monumental entrance) of the southern baths whose hydraulic system provided it with water.

A full-body statue of a dressed female was revealed by archaeologists headed by Sedef Cokay Kepçe in 2020. The statue, believed to have been made during the Roman Empire, will be on display at the Antalya Museum. [31] [32]

Perga's most celebrated ancient inhabitant was the mathematician Apollonius (c.262 BC – c.190 BC) who lived and worked there. He wrote a series of eight books describing a family of curves known as conic sections, comprising the circle, ellipse, parabola, and hyperbola. [33]