Park Avenue is a wide New York City boulevard [4] which carries north and southbound traffic in the borough of Manhattan. For most of the road's length in Manhattan, it runs parallel to Madison Avenue to the west and Lexington Avenue to the east. Park Avenue's entire length was formerly called Fourth Avenue; the title still applies to the section between Cooper Square and 14th Street. [5] The avenue is called Union Square East between 14th and 17th Streets, and Park Avenue South between 17th and 32nd Streets. 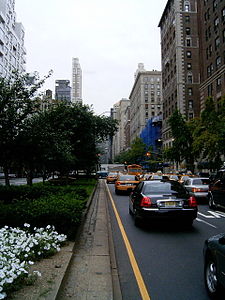 Park Avenue on the Upper East Side 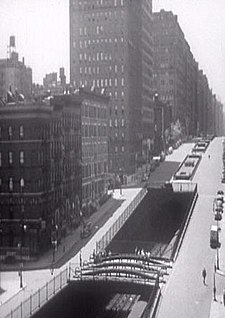 The railroad tunnel in 1941

The Harlem Railroad was later incorporated into the New York Central Railroad, and a terminal for the New York Central at 42nd Street, the Grand Central Depot, opened in 1871. [9]: 3  But the tracks laid to the new terminal proved problematic. There were originally no grade-separated crossings of the railroads between 42nd and 59th Streets. [10] As such, they required railroad crossings along Fourth Avenue, which resulted in frequent accidents; seven people died within 12 days of the Hudson River Railroad's move to Grand Central. [11]

In 1872, shortly after the opening of Grand Central Depot, New York Central owner Cornelius Vanderbilt proposed the Fourth Avenue Improvement Project. [9] The tracks between 48th and 56th Streets were to be moved into a shallow open cut, [12] while the segment between 56th and 97th Streets, which was in a rock cut, would be covered over. [9] [a] After the improvements were completed in 1874, the railroads, approaching Grand Central Depot from the north, descended into the Park Avenue Tunnel at 96th Street and continued underground into the new depot. [9] As part of the project, Fourth Avenue was transformed into a boulevard with a median strip that covered the railroad's ventilation grates. [14] [15] [9]: 4  Eight footbridges crossed the tracks between 45th and 56th Streets, and there were also vehicular overpasses at 45th and 48th Streets. [9]: 4  The boulevard north of Grand Central was renamed Park Avenue in 1888. [16]

A fatal collision between two trains occurred under Park Avenue in 1902, in part because the smoke coming from the steam trains obscured the signals. [17] [18] The New York state legislature subsequently passed a law to ban all steam trains in Manhattan. [19] By December 1902, as part of an agreement with the city, New York Central agreed to put the approach to Grand Central Station from 46th to 59th Streets in an open cut under Park Avenue, and to upgrade the tracks to accommodate electric trains. Overpasses would be built across the open cut at most of the cross-streets. [20] The new electric-train terminal, Grand Central Terminal, was opened in 1913. [21]

After the electric trains were buried underground, the area around Park Avenue in the vicinity of Grand Central was developed into several blocks worth of prime real estate called Terminal City. Stretching from 42nd to 51st Streets between Madison and Lexington Avenues, it came to include the Chrysler Building and other prestigious office buildings; luxury apartment houses along Park Avenue; and an array of high-end hotels that included the Marguery, Park Lane, and Waldorf Astoria. [22] In 1929, New York Central built its headquarters in a 34-story building (now called the Helmsley Building), straddling Park Avenue north of the terminal. [23]

The Park Avenue Viaduct reroutes Park Avenue around Grand Central Terminal between 40th and 46th Streets, allowing Park Avenue traffic to traverse around the building and over 42nd Street without encumbering nearby streets. [24] The western (now southbound) leg of the viaduct was completed in 1919, [25] but congestion developed soon after the viaduct's opening, so an eastern leg for northbound traffic was added in 1928. [24]

The developer Henry Mandel acquired the lots on the eastern side of Fourth Avenue between 32nd and 33rd Street in 1923 under the name "One Park Avenue Corporation". To ensure his corporate name was accurate, Mandel asked the New York City Board of Aldermen to move Park Avenue's southern terminus to 32nd Street. [8] The change went into effect on December 1, 1924, and address numbers along Park Avenue were changed accordingly. [26] The previous house numbered 1 Park Avenue was occupied by Martha Bacon, widow of diplomat Robert Bacon, who led the opposition to the renumbering. [27] The Board of Aldermen summarily overturned the name change, [8] but Mayor John Hylan vetoed the move in April 1925. [28] This prompted Bacon to appeal the decision to the New York Supreme Court, Appellate Division, which overturned Hylan's veto in November 1927, on the basis that the extension of Park Avenue to 32nd Street had been made for the benefit of a developer. [26] [29] Mandel's development at 32nd Street was thus known as 461–477 Fourth Avenue, and the developers of that building sued to reverse the appellate ruling. [8] The New York Court of Appeals, the state's highest court, reversed the appellate ruling in February 1928. [30] [31] Bacon contemplated bringing up the matter with the United States Supreme Court, [32] but she ultimately relented, changing her address to "Park Avenue at 34th" by 1930. [8]

In 1927, the medians on Park Avenue north of Grand Central were trimmed to add one lane of traffic in each direction. This project eliminated the pedestrian path on the medians, as they became much narrower. The median was extended by one block from 96th Street to 97th Street in 1941, creating the only remaining median on Park Avenue with a pedestrian path and seating. [33] In the 1920s the portion of Park Avenue from Grand Central to 96th Street saw extensive apartment building construction. This long stretch of the avenue contains some of the most expensive real estate in the world. Real estate at 740 Park Avenue, for example, sells for several thousand dollars per square foot. [34]

In October 1937, a part of the Murray Hill Tunnel was reopened for road traffic. Efforts to promote a Grand Park Avenue Expressway to Grand Concourse in the Bronx were unsuccessful. [35]

A tradition was introduced in 1945 as a memorial to American soldiers killed in action, whereby Christmas trees are placed in the median and lit up on the first Sunday in December at Brick Presbyterian Church. [36] On May 5, 1959, the New York City Council voted 20–1 to change the name of Fourth Avenue between 17th and 32nd Streets to Park Avenue South. The renaming, along with a ban on overhanging signs along the newly renamed Park Avenue South, was intended to improve the character of the avenue. [37] Unlike with the earlier renamings of Park Avenue, the address numbers of Park Avenue South continued from those on the remaining section of Fourth Avenue. [8] The Pan Am Building (now MetLife Building), in between the Park Avenue Viaduct's legs north of Grand Central Terminal, was opened in 1963. [38]

Above 32nd Street, for the remainder of its distance, it is known as Park Avenue, a 140-foot-wide (43 m) boulevard. [2] The address numbers for Park Avenue are reset above 32nd Street; [40] for example, the address 1 Park Avenue would ordinarily have been numbered 461 Fourth Avenue. [8] Between 33rd Street and 40th Street, the leftmost northbound lane descends into the Murray Hill Tunnel. North of 40th Street, the center lanes of Park Avenue rise onto an elevated structure that goes around Grand Central Terminal and the MetLife Building (formerly the Pan Am Building), carrying each direction of traffic on opposite sides of the buildings. The bridge, one of two structures in Manhattan known as the Park Avenue Viaduct, returns to ground level at 46th Street after going through the Helmsley Building (also referred to as the New York Central Building or 230 Park Avenue). [2] The IRT Lexington Avenue Line runs under this portion of the street. Once the line reaches Grand Central–42nd Street, it shifts east to Lexington Avenue. 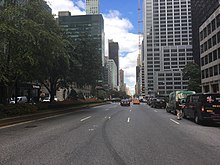 As Park Avenue enters Midtown north of Grand Central Terminal, it is distinguished by many glass-box skyscrapers that serve as headquarters for corporations and investment banks such as Société Générale, JPMorgan Chase at 270 Park Avenue and 277 Park Avenue, UBS at 299 Park Avenue, Citigroup at 399 Park Avenue, Colgate-Palmolive, and MetLife at the MetLife Building. [2] Prior to July 2010, the eleven intersections between 46th Street and 56th Street lacked the city's usual pedestrian crossing signals and overhead gantry-mounted traffic lights, because the railroad tunnel ceiling, which is also the street, was not thick enough for their poles' foundations. (These intersections did, however, have upright pole-mounted traffic lights prior to 2010, but there were no pedestrian signals. After 2010, standard gantry-mounted traffic lights and pedestrian "countdown" signals were installed.) [42] [43]

The flowers and greenery in the median of Manhattan's Park Avenue are privately maintained, by the Fund for Park Avenue. The begonia was specifically chosen by the Fund's gardeners because there is no automatic watering system and the floral variety is resilient under hot sun rays. [44]

The avenue is continued on the other side of the river in the Bronx. In the Bronx, Park Avenue begins at East 135th Street in the Mott Haven neighborhood. The entire avenue is divided by Metro-North's own right of way in the borough. Between East 135th Street to East 173rd Street, Park Avenue is one way only in either direction in most sections. North of East 173rd Street it is a two way avenue continuing to Fordham Plaza where it ends. [3] 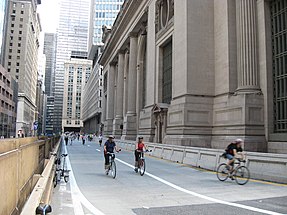 The following institutions are either headquartered or have significant business presences on Park Avenue:

Metro-North Railroad's Grand Central Terminal, serving the Harlem Line, Hudson Line, and New Haven Line, is at 42nd Street and Park Avenue. The MNR's Park Avenue main line runs along Park Avenue in both boroughs between Grand Central and Fordham station, with stations in between at 125th Street, 162nd Street, and Tremont Avenue. [45]