The airport covers 1,741 acres (705 ha) and has two parallel runways. [2] It is the West Coast air and truck hub for UPS Airlines and is a major distribution point for FedEx Express. As of September 2018 [update], ONT has more than 64 daily departures and arrivals. [4] As Ontario's long runways (runway 8L/26R) are longer than three of the four runways at LAX, it is an alternate landing site for large aircraft destined for LAX. [5]

In 1923 a landing field was established east of Central Avenue (3 miles (4.8 km) west of the current airport) on land leased from the Union Pacific Railroad. The airfield was named Latimer Field after an orange-packing company next to the airstrip. An airport was built there by one of the first flying clubs in southern California, the Friends of Ontario Airport. In 1929, the city of Ontario purchased 30 acres (12 ha), now in the southwest corner of the airport, for $12,000, and established the Ontario Municipal Airport.

After the war, it was one of the five large storage, sales, and scrapping centers for Army Air Forces aircraft established by the Reconstruction Finance Corporation; others were at Albuquerque AAF, New Mexico; Altus AAF, Oklahoma; Kingman AAF, Arizona; and Walnut Ridge AAF, Arkansas.

In 1946, Ontario Municipal Airport was renamed "Ontario International Airport" because of the transpacific cargo flights originating there. On 17 May 1946, two Army surplus steel hangars arrived at the airport, which the Ontario city council had authorized the $50,000 purchase of just the previous week. City officials were pleased to have secured a bargain. Thought to be the only pair available in the U.S., City Manager Harold J. Martin observed that even if they could be acquired at a later date, the cost would be several times that afforded by prompt action. [7] A Pacific Overseas Airlines flight from Shanghai arrived at Ontario on 18 May 1946, "which inaugurated regular round-trip air passenger air service between the United States and the orient." [8] In 1949 Western Airlines began scheduled flights; in 1955 Bonanza Air Lines flights started. Western and Bonanza nonstops did not reach beyond Las Vegas. In 1962 Western began nonstop flights to San Francisco (one Electra daily). In 1967 Bonanza began nonstop F27 flights to Phoenix.

In 1981 a second east–west runway, 26L/8R, was built, necessitating the removal of the old NE-SW runway 4/22. Remnants of the 4/22 runway are visible in the present-day taxiways. With the completion of the new runway, the existing runway 25/7 became 26R/8L. In 1985, the city of Los Angeles acquired Ontario International Airport outright from the city of Ontario. In 1987, Runway 26R/8L was extended to the east to bring the two runway thresholds side by side, so aircraft would be higher over neighborhoods. 26R/8L became the main departing runway and 26L/8R the main arrival runway.

For a number of years, the airport operated alongside Ontario Air National Guard Station, which was closed as a result of the 1995 Base Realignment and Closure Commission.

In 1998 the new and larger airport terminal opened, designed by DMJM Aviation. [11] Two older terminals, west of the current terminal, the main terminal and a small terminal were discontinued when the new Terminal 2 and Terminal 4 facilities were opened. The old terminals currently house the administration and the USO.

In 2005 and 2006, Runway 26R/8L was repaved, strengthened, and received storm drains and better runway lighting, and additional improvements to taxiway intersections were made. [12] 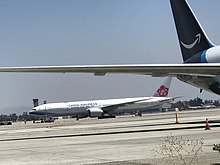 The airport's traffic peaked in 2005 with 7.2 million passengers, and remained steady through 2007. Around the time of the 2008 financial crisis, JetBlue suspended service to ONT, and major legacy carriers significantly decreased their passenger volume at the airport. [14] Southwest Airlines transferred a significant portion of its Ontario capacity to Los Angeles International Airport (LAX), making LAX fares more competitive with ONT while being coupled with more attractive frequencies and a wider range of destinations. The surrounding Inland Empire region was hit hard by the financial crisis, with the nearby city of San Bernardino declaring bankruptcy. [15] The airport suffered a 40% decline in traffic between 2007 and 2012, [16] during which time traffic at LAX recovered to surpass pre-recession levels. [14]

Ownership and control of the airport became an issue in late 2010 when the city of Ontario, supported by the Southern California Association of Governments, criticized and questioned LAWA's operation of the airport. [17] [18] [19] A group of local government officials, led by Ontario city council member Alan Wapner, began a campaign to transfer control of the airport away from Los Angeles World Airports. Wapner argued that the City of Los Angeles had no interest in maintaining service at an airport well beyond its borders. [15] In 2013, LAWA offered to return the airport to local control for a purchase price of $474m, which was rejected. [20] Local groups then sued the city of Los Angeles, a suit that was temporarily suspended when both sides agreed to attempt to work together. [21]

The airport's continuing traffic decline reversed in early 2017, when the airport experienced faster growth than LAX for the first time since 2007. [23] On September 30, 2017, it was announced that China Airlines would begin nonstop flights from Ontario to Taipei which started in Spring 2018. [24] [25] 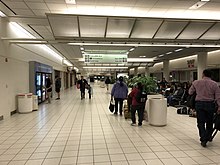 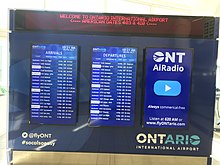 An American Airlines Boeing 737 at Terminal 4

The International arrivals facility has 2 gates for arrivals only, containing the airport's U.S. Customs and Border Protection facility. [29] International flights depart from the main terminals.

A USO is housed in the old terminal complex near the international arrivals facility. [30]

Remote parking is located on the east end of the airport (moved from its former location at the west end). On the east end is a ground transportation center that consolidates the rental car companies in one central location. A circulator bus circles the airport and provides connections to each of the terminals, rental car and remote parking lots, and public transit stops.

General aviation is located at the south side of the airport, although most general aviation pilots tend to use a number of nearby airports: Redlands Airport, Chino Airport, Brackett Field in La Verne, Cable Airport in Upland, or San Bernardino International Airport.

The airport is about 38 miles (61 km) east of downtown Los Angeles, 18 miles (29 km) west of downtown San Bernardino and 14 miles (23 km) northwest of downtown Riverside. Motorists can use the San Bernardino Freeway ( Interstate 10), Ontario Freeway ( Interstate 15), or the Pomona Freeway ( State Route 60). It is served by Omnitrans bus routes 61, 80 and by private shuttles. [31] The Metrolink Riverside Line runs to Ontario–East station at peak commuter hours, Monday to Friday only, located roughly 2.3 miles (3.7 km) south of the terminal, Omnitrans Bus line 81 can shuttle people to and from the station to the airport directly as of 2019.

The Ontario Airport Loop was endorsed by the San Bernardino County Transportation Authority Board of Directors on June 3, 2020. The Boring Company has purposed a high-speed tunnel linking Rancho Cucamonga with Terminal 2. [32] In 2021, SBCTA offered a Lyft credit from the Montclair TransCenter for passengers traveling to the airport.

Ontario has few noise restrictions/abatement rules, unlike other Southern California airports such as John Wayne Airport, Bob Hope Airport, Long Beach Airport, and San Diego International Airport, which all have very strict policies. [33] The airport is allowed to operate 24/7, but during the hours of 10 pm to 7 am all aircraft must arrive from the east on runway 26L or 26R and take-off to the east on runway 8R or 8L, depending on ATC instruction. This procedure is known as "Contra-Flow" operations and applies to turbo-jet or turbo-fan aircraft. This procedure is similar to the one employed by LAX, where all landings are conducted from the east and all takeoffs are to the west (known as "over-ocean" operations) between midnight and 6:30 a.m. Both of these procedures are employed as long as weather and/or construction activity permits. This is done in an effort to be better neighbors and minimize the noise impact to the surrounding communities as much as possible. Residents of cities west of the airport have complained of increased noise as a result of the airport's refusal to abide by noise abatement rules. [34]