From Wikipedia, the free encyclopedia
Town in Kantō, Japan

Fishing is popular in Okutama.

Okutama is located in the Okutama Mountains of far western Tokyo. It is geographically the largest municipality in Tokyo. Mount Kumotori, Tokyo's highest peak at 2017 m, divides Okutama from the Okuchichibu region of the neighboring Saitama and Yamanashi Prefectures. Tokyo's northernmost and westernmost points lie in Okutama, as does Lake Okutama, an important source of water for Tokyo, situated above the Ogōchi Dam in the town. [2]

Okutama has a Humid subtropical climate (Köppen Cfa) characterized by warm summers and cool winters with light to no snowfall. The average annual temperature in Okutama is 10.6 °C. The average annual rainfall is 2091 mm with September as the wettest month. The temperatures are highest on average in August, at around 22.1 °C, and lowest in January, at around minus 1.1 °C. [7]

Per Japanese census data, [10] the population of Okutama has decreased steadily since the 1950s, and is now two-thirds of what it was a century ago.

People began settling in Okutama from before the Jōmon Period and many archaeological sites have been found with ancient pottery. During the Yayoi period, rice cultivation began in the flatter lands of present-day Okutama, but most of the area remained covered by forests and only small flat lands existed. [11]

During the Edo period, the area included in present-day Okutama was divided into 16 villages within Musashi Province. In each village, there was one person who served as the mayor, another who served as the leader of a particular group, and another who served as a representative for the farmers. Also, entering Mount Takanosu was forbidden for people of low rank during this time. This was because the people of high rank (government officials and such) hunted with hawks at the mountain, and the officials wanted to keep the hunting grounds for themselves. [11]

With the start of the Meiji period, the area of Okutama became part of Nirayama Prefecture except for Kotaba village, which was merged into Maebashi Domain, which then became part of Gunma Prefecture. While Kotaba village was turned into part of Maebashi city, the Okutama area was divided into three villages of Hikawa, Kori, and Ogouchi with the establishment of the modern municipalities system on April 1, 1889. In 1940, Hikawa was elevated to town status. In 1955, Hikawa town, Ogouchi village and Kori village were united, forming the town of Okutama. [11]

Okutama has a mayor-council form of government with a directly elected mayor and a unicameral town council of 12 members. Okutama, collectively with the municipalities of Akiruno, Fussa, Hamura, Hinode, Hinohara and Mizuho, contributes two members to the Tokyo Metropolitan Assembly. In terms of national politics, the city is part of Tokyo 25th district of the lower house of the Diet of Japan.

Seasonal tourism, forestry and charcoal production are mainstays of the local economy.

Okutama has two public elementary and two public middle schools operated by the town government. The town does not have a high school. 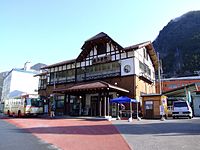 The East Japan Railway Company serves the town. The Ōme line, which connects the town with Tachikawa, terminates at Oku-Tama Station. 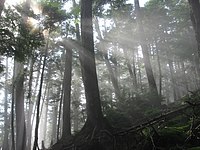 A forest in the Okuchichibu Mountains

All of the town is located in Chichibu-Tama-Kai National Park. 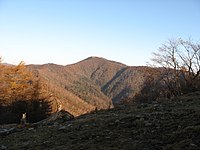 Wikivoyage has a travel guide for Okutama.
Retrieved from " https://en.wikipedia.org/?title=Okutama,_Tokyo&oldid=1090247378"
Categories:
Hidden categories: