From Wikipedia, the free encyclopedia
Member of the woodpecker family
For other uses, see Yellowhammer (disambiguation).
This article is about the North American bird. For the Eurasian bird, see Yellowhammer.

The northern flicker (Colaptes auratus) or common flicker is a medium-sized bird of the woodpecker family. It is native to most of North America, parts of Central America, Cuba, and the Cayman Islands, and is one of the few woodpecker species that migrate. Over 100 common names for the northern flicker are known, including yellowhammer (not to be confused with the Eurasian yellowhammer), clape, gaffer woodpecker, harry-wicket[ citation needed], heigh-ho, wake-up, walk-up, wick-up, yarrup, and gawker bird. Many of these names derive from attempts to imitate some of its calls.

The English naturalist Mark Catesby described and illustrated the northern flicker in his book The Natural History of Carolina, Florida and the Bahama Islands which was published between 1729 and 1732. Catesby used the English name "Gold-winged Wood-pecker" and the Latin Picus major alis aureis. [2] When in 1758 the Swedish naturalist Carl Linnaeus updated his Systema Naturae for the tenth edition, he included the northern flicker, coined the binomial name Cuculus auratus and cited Catesby's book. [3] The specific epithet auratus is a Latin word meaning "gilded" or "ornamented with gold". [4] The type locality is South Carolina. [5] The northern flicker is one of 13 extant New World woodpeckers now placed in the genus Colaptes that was introduced by the Irish zoologist Nicholas Aylward Vigors in 1825 with the northern flicker (Colaptes auratus) as the type species. [6]

Ten subspecies of northern flicker are recognized, of which one is now extinct. [7] The extant subspecies were at one time considered subspecies of two separate species called the yellow-shafted flicker (C. auratus) and the red-shafted flicker (C. cafer), but they commonly interbreed where their ranges overlap and are now considered one species by the American Ornithologists Union. This is an example of what is referred to as the " species problem".

This bird's call is a sustained laugh, ki ki ki ki, quite different from that of the pileated woodpecker. One may also hear a constant knocking as they often drum on trees or even metal objects to declare territory. Like most woodpeckers, northern flickers drum on objects as a form of communication and territory defense. In such cases, the object is to make as loud a noise as possible, so woodpeckers sometimes drum on metal objects.

Like many woodpeckers, its flight is undulating. The repeated cycle of a quick succession of flaps followed by a pause creates an effect comparable to a roller coaster.

According to the Audubon field guide, "flickers are the only woodpeckers that frequently feed on the ground", probing with their beak, also sometimes catching insects in flight. Although they eat fruits, berries, seeds, and nuts, their primary food is insects. Ants alone can make up 45% of their diet. Other invertebrates eaten include flies, butterflies, moths, beetles, and snails. Flickers also eat berries and seeds, especially in winter, including poison oak and poison ivy, dogwood, sumac, wild cherry, grape, bayberries, hackberries, and elderberries, as well as sunflower and thistle seeds. Flickers often break into underground ant colonies to get at the nutritious larvae there, hammering at the soil the way other woodpeckers drill into wood. They have been observed breaking up cow dung to eat insects living within. Their tongues can dart out 50 mm (2.0 in) beyond the end of the bill to catch prey. [17] The flicker is a natural predator of the European corn borer, a moth that costs the US agriculture industry more than $1 billion annually in crop losses and population control. [18] [19] As well as eating ants, flickers exhibit a behavior known as anting, in which they use the formic acid from the ants to assist in preening, as it is useful in keeping them free of parasites.

Influence of diet on offspring

According to an article published in Ibis, the availability of food affects the coloration of feathers in nestlings. The article focused on the correlation between melanin spots and carotenoid-based coloration on the wings of nestlings with food stress via indirect manipulation of brood size. The article found that there was a positive correlation between the quality of the nestlings' diet and T-cell-mediated immune response. T-cell-mediated immune response was found to be positively correlated with brightness of pigmentation in flight feathers, but not related to melanin spot intensity. [20]

Flickers may be observed in open habitats near trees, including woodlands, edges, yards, and parks. In the western United States, one can find them in mountain forests all the way up to tree line. Northern flickers generally nest in holes in trees like other woodpeckers. Occasionally, they have been found nesting in old, earthen burrows vacated by belted kingfishers or bank swallows. Both sexes help with nest excavation. The entrance hole is about 7.6 cm (3.0 in) in diameter, and the cavity is 33–41 cm (13–16 in) deep. The cavity widens at bottom to make room for eggs and the incubating adult. Inside, the cavity is bare except for a bed of wood chips for the eggs and chicks to rest on. Once nestlings are about 17 days old, they begin clinging to the cavity wall rather than lying on the floor. 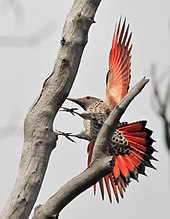 Two males in a territorial display during spring

Their breeding habitat consists of forested areas across North America and as far south as Central America. They are cavity nesters which typically nest in trees, but they also use posts and birdhouses if sized and situated appropriately. They prefer to excavate their own home, although they reuse and repair damaged or abandoned nests. Abandoned flicker nests create habitat for other cavity nesters. Flickers are sometimes driven from nesting sites by another cavity nester, the European starling. 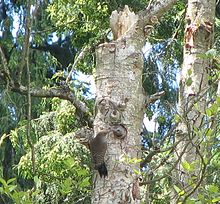 A typical clutch consists of six to eight eggs whose shells are pure white with a smooth surface and high gloss. The eggs are the second-largest of the North American woodpecker species, exceeded only by the pileated woodpecker's. Incubation is by both sexes for about 11 to 12 days. The young are fed by regurgitation and fledge about 25 to 28 days after hatching.

Northern birds migrate to the southern parts of the range; southern birds are often permanent residents.