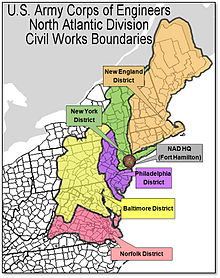 The North Atlantic Division of the U.S. Army Corps of Engineers is one of the eight permanent divisions within the Corps.

Made up of roughly 3,500 employees in six districts and a Division headquarters, the North Atlantic Division is a major subordinate command and serves to integrate the capabilities of its six districts. They plan, design and build for the Army and Air Force in the northeastern states and Europe, develop and manage water resources, and protect and restore the environment. They also work for other international, federal, state and local customers and agencies.

Following the American Civil War, rapid increases in civil works construction requirements to support economic growth drove the Army Corps of Engineers to establish many new engineer districts to manage the work. The Corps' national headquarters needed an intermediate level of command and control to manage the districts, so it created several division headquarters including the Northeast Division based in New York City in November 1888. [1]

The Corps of Engineers reorganized in 1929 to reduce division headquarters and merged the Eastern Division with the Northeast Division, forming the North Atlantic Division.

During World War II while working out of its headquarters at 270 Broadway in Manhattan, the division was responsible for coordinating all military construction in Europe. It also provided staff members and administrative support to the newly created Manhattan District's construction of nuclear bomb, which was code named the Manhattan Project because the district and division's offices being initially co-located.