From Wikipedia, the free encyclopedia
Vertical datum for orthometric heights

NAVD 88, along with North American Datum of 1983 (NAD 83), is set to be replaced with a new GPS- and gravimetric geoid model-based geometric reference frame and geopotential datum in 2022. [3] 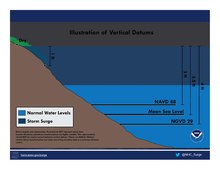 Illustration of vertical datums in the United States.

NAVD 88 was established in 1991 by the minimum-constraint adjustment of geodetic leveling observations in Canada, the United States, and Mexico. It held fixed the height of the primary tide gauge benchmark (surveying), referenced to the International Great Lakes Datum of 1985 local mean sea level (MSL) height value, at Rimouski, Quebec, Canada. Additional tidal bench mark elevations were not used due to the demonstrated variations in sea surface topography, i.e., that MSL is not the same equipotential surface at all tidal bench marks. [1]

North American Vertical Datum of 1988 (NAVD 88) consists of a leveling network on the North American Continent, ranging from Alaska, through Canada, across the United States, affixed to a single origin point on the continent. [1]

In 1993 NAVD 88 was affirmed as the official vertical datum in the National Spatial Reference System (NSRS) for the Conterminous United States and Alaska. [4] (see Federal Register Notice (FRN)). Although many papers on NAVD 88 exist, no single document serves as the official defining document for that datum. [1]

The definition of NAVD 88 uses the Helmert orthometric height, which calculates the location of the geoid (which approximates MSL) from modeled local gravity.[ citation needed] The NAVD 88 model is based on then-available measurements, and remains fixed despite later improved geoid models.[ citation needed]

Since NGVD 29 used a simple model of gravity based on latitude to calculate the geoid and did not take into account other variations,[ citation needed] elevation difference between points in a local area in it and NAVD 88 will show negligible change from one datum to the other, even though the elevation of both does change between datums.[ citation needed]

The new reference frames will rely primarily on Global Navigation Satellite Systems (GNSS), such as the Global Positioning System (GPS), as well as on a gravimetric geoid model resulting from NOAA's Gravity for the Redefinition of the American Vertical Datum (GRAV-D) Project.

These new reference frames are intended to be easier to access, and maintain, than NAD 83 and NAVD 88, which rely on physical survey marks that deteriorate over time. [3]